So here's the thing:

The guy has access to good information. Sometimes knowledgeable people, experts even, come to him... 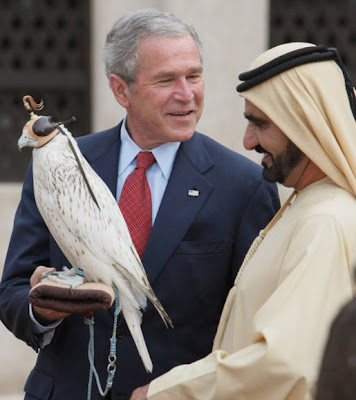 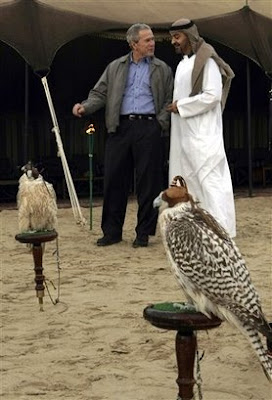 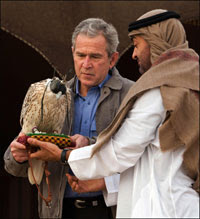 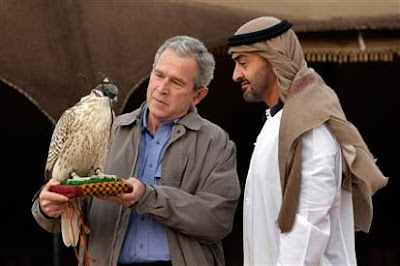 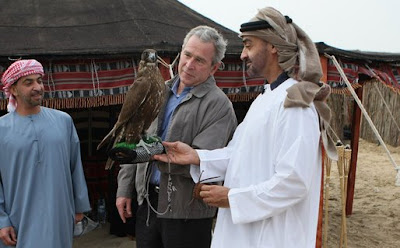 But just when it seems he might be getting it... 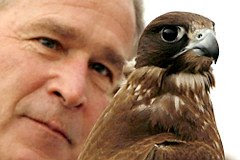 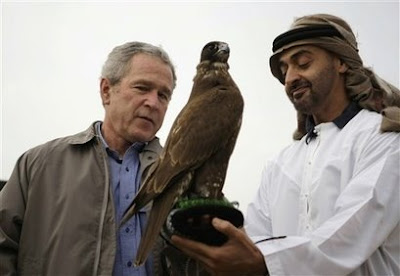 He goes and makes the lame decision anyway. 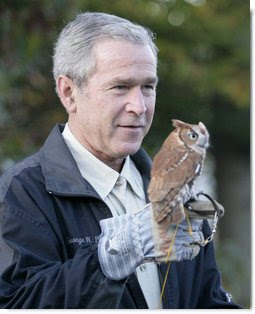 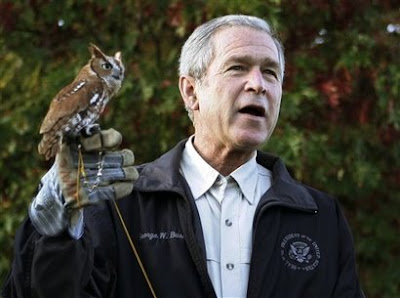 (Gotta love the stylin' "Members Only" jacket, though.) 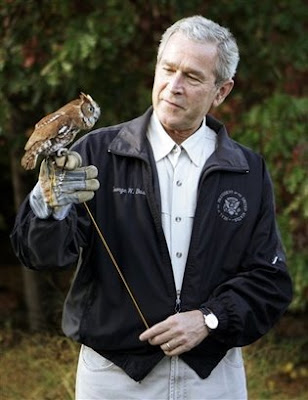 Posted by Mark Churchill at 4:35 PM No comments:

Day for the ducks

As you read this, North America's most important waterfowl breeding habitat is being plowed under on a massive scale. Surging demand for food, federal mandates for corn-based ethanol production, and the new Farm Bill are encouraging cultivation of every available acre, including pristine native prairie and land formerly enrolled in the Conservation Reserve Program (CRP).
. . .
And the loss of prairie breeding habitat is escalating. In 2007 alone, more than 850,000 acres of former CRP land in the Prairie Pothole Region (PPR) were converted back to cropland. In total, more than 4.3 million acres of CRP will expire in this region by 2012. Even worse for the future of waterfowl, however, is the ongoing loss of native prairie. The remaining 22 million acres of native grassland in the PPR produce the majority of the fall flight of waterfowl from the United States each year. Sadly, North Dakota, South Dakota, and Montana have lost more than 500,000 acres of native prairie since 2002, with almost 64,000 acres lost just last year. If current loss trends continue, an additional 3.3 million acres of native prairie will be lost in the next few years.

Native prairie is still being lost to cultivation in Nebraska as well. This would be bad enough if these acres were being farmed for food, but for ethanol?!? This is sheer lunacy—it's an unpopular position here in Nebraska where corn is king, but ethanol is not the answer to America's energy concerns. And destroying native prairie for the sake of ethanol is not just bad policy, it's a crime against humanity. 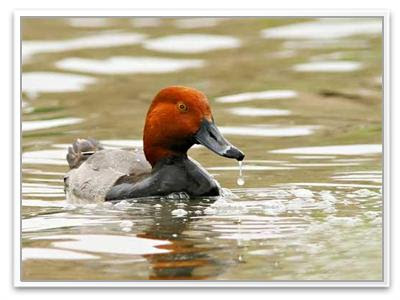 Habitat destruction, the biggest threat to most wildlife and therefore to biodiversity, is not just something that happens in the far-away Amazon. It's right here, everywhere developers are building suburbs and everywhere farmers are plowing under native grasslands. So what to do?

Fortunately, many farmers and ranchers are ready to work with Ducks Unlimited to save this vital prairie waterfowl habitat. Right now, these landowners have offered to sell Ducks Unlimited grassland easements on more than 300,000 acres of wetland-rich native prairie in North Dakota and South Dakota. For a one-time payment of only $360 an acre, DU can purchase these easements and permanently protect this vital habitat forever. Presently, landowner demand for grassland easements far exceeds available funding.

Accordingly, DU has started a "Rescue the Duck Factory" fundraising campaign. This is a worthy cause, enough so to overlook the redundancy of "permanently protecting habitat forever". Cashflow being restricted on the home front, I've decided to give up one of my days off, sign up for an extra shift at work, and pledge the proceeds to DU.

I challenge anyone reading this to think of a way to dig deep and contribute: Sign up for some overtime. Forgo a night out, or a week's worth of Starbucks. Heck, if you happen to have the cash on hand, just sacrifice that. It's only money... Your reward? The chance to help some of your fellow Americans do the right thing, and autumn skies full of ducks and geese.

[Ducks unlimited—redhead drake and a big flight: Drawing by Ellie, shortly after her 7th birthday.] 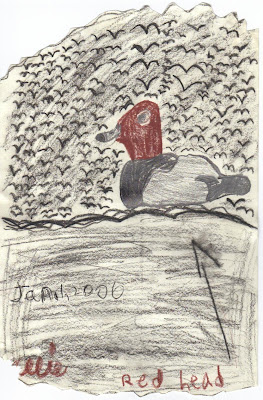 Three cheers, by the way, for Rebecca at Operation Desert Dove, who just took a job with DU in California.

Posted by Mark Churchill at 5:03 PM No comments:

That frozen concoction that helps me hang on

Jimmy Buffett can keep his frozen margaritas—I prefer mine poured on the rocks. For hot-weather refreshment when I need to keep my wits about me, my frozen concoction of choice is the snowball.

Now let me be clear: A snowball is not an Italian ice, and it's certainly not a snow cone. A snow cone is granulated ice with a small amount of flavoured syrup; a snowball is finely shaved ice with a large amount of flavoured syrup. Snowballs are popular in Maryland (the shaved-ice machine was invented in Baltimore), where they are nearly as iconic as steamed crabs and Natty Boh, but damn near unheard-of everywhere else (which is why I have to shoot down the snow cone comparison straight away).

I favoured watermelon snowballs as a kid, but have since adopted my late mom's choice: spearmint and chocolate. Mint-chocolate snowballs may not be visually appealing—as they melt, they turn a nasty brownish-olive color that reminds some people of a baby's diapers—but they are delicious, and I indulged in a couple while back home last week.

Normally, my return to Nebraska would be marked by snowball withdrawal, but it turns out that Lincoln has not one but two snowball stands. I was expecting a Baltimore connection, but according to the young man behind the counter, Snow Rush (reviews here and here) is owned by a family from Louisiana. Susie ordered Georgia peach, and I ordered spearmint (alas, no chocolate on the menu), and when they were served I was alarmed to see the ice piled high above the rim of the cup—like a snow cone. Fortunately, one taste proved we had the real thing: genuine, oh-so-refreshing snowballs. And even better, the counterman agreed to share my request for chocolate syrup with the owner.

Summer is, for me, kind of a drag. If I could aestivate like a ground squirrel, sleeping away the hottest weeks underground, I would. But snowballs can make even a hot summer's day bearable. A Maryland treat, in Nebraska, by way of Louisiana? Laissez les bon temps roulez!


[Update: I added links to two reviews, above. The Journal Star review credits a shaved-ice machine to a New Orleans grocer. This article at Wikipedia would seem to agree. Clearly further research is needed, but I did enjoy learning about other incarnations such as the granizado, piragua, and raspado.

Meanwhile, great article about the true Baltimore snowball here, courtesy of the City Paper. Sources interviewed for this article date snowball consumption in Charm City to the turn of the last century, well before the New Orleans machine was invented, but not necessarily disproving the Big Easy's claim to fame since the earliest snowballs were apparently hand-shaved. Anyway, RTWT for cultural significance. The references to Gino's, Wild Bill, Chessie, etc. really take me back. Guess I'll have to put on some Crack the Sky now. Video below: "Ice" (get it?) performed live in 1998.]

I’ll be mostly away from the computer for about a week, but here’s a story to tide you over... Last September, in their “All-Gear Issue”, Field & Stream ran a Bill Heavey article (“Always on Call”) about his visit to the Cabela’s call centers in Kearney and Grand Island. It included a few stories from phone reps; the best were the guy who wanted a refund on a broken fishing rod (he had been fishing for alligators) and the customer who kept ordering and then returning cuckoo clocks (his complaint was with the packaging: "Everybody knows that if you pack cuckoo clocks in cardboard, it makes the cuckoo louder"). I do some part-time work for Cabela’s, and the following is a transcript, as accurate as memory allows, of one of my favorite calls:

Pause. “Okay...” I should mention that I did not know at the time, and still don’t know, if my leg was being pulled. But if this was a joke, the caller deserves some kind of award for his acting skills. He played it very straight. In any case, I couldn’t imagine what kind of scent might repel bears. They are very serious about omnivory: they will eat almost anything, including plain candle wax. My search, predictably, came up empty, and I told the caller so.

“Now there I can help you. We carry several...” I proceeded to tell him about what I considered the best option. “It’s basically a very heavy-duty pepper spray.”

“How far will that spray?”

“Yeah, that sounds good. Now, if that gets in the kids’ eyes...will it hurt?”

I thought about saying, Well, that depends, sir. How tough are your kids? I mean, we’re talking about pepper spray here, enough to deter a bear. I settled for:

Brief hesitation. “Okay, then, thank you very much.” And he rang off. 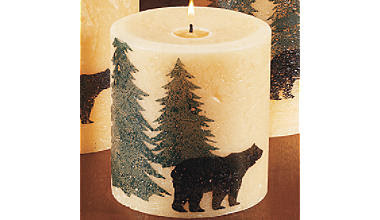 Posted by Mark Churchill at 8:30 AM 2 comments: