NFA secretary/treasurer Donna Vorce ended up not taking a hawk this year, so she offered some of her fields for a late-season bunny-hawking gathering. This was designated a mini-meet because it wasn't on the official calendar—the official meet was last month, and I was down with the flu—but it had a better turnout than some of the official field meets, with three hawks (all redtails) and about a dozen people in attendance. We met at a cafe in the small town of Bruning, socialized a bit over a good breakfast, and then hit the field in the late morning. 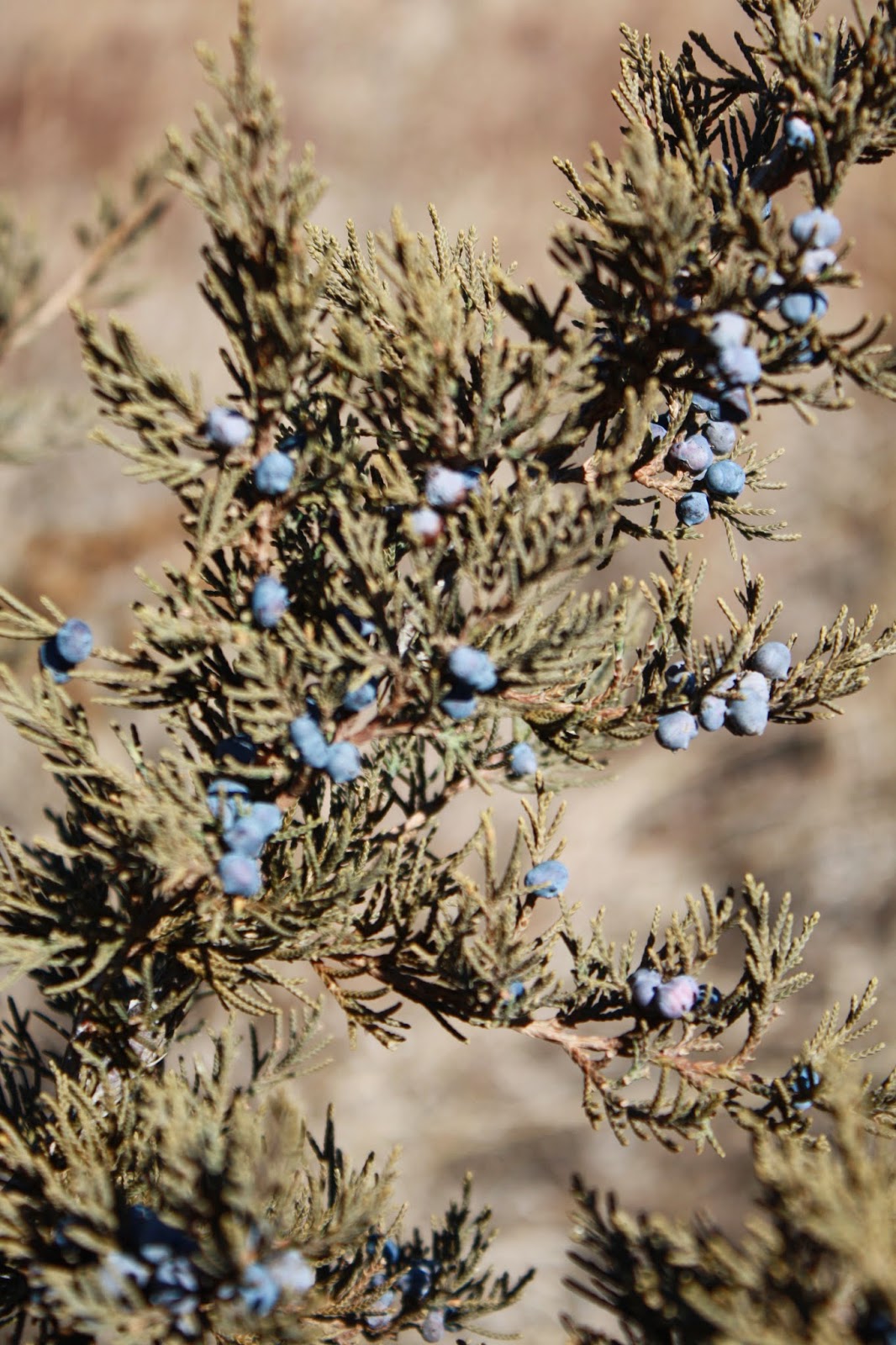 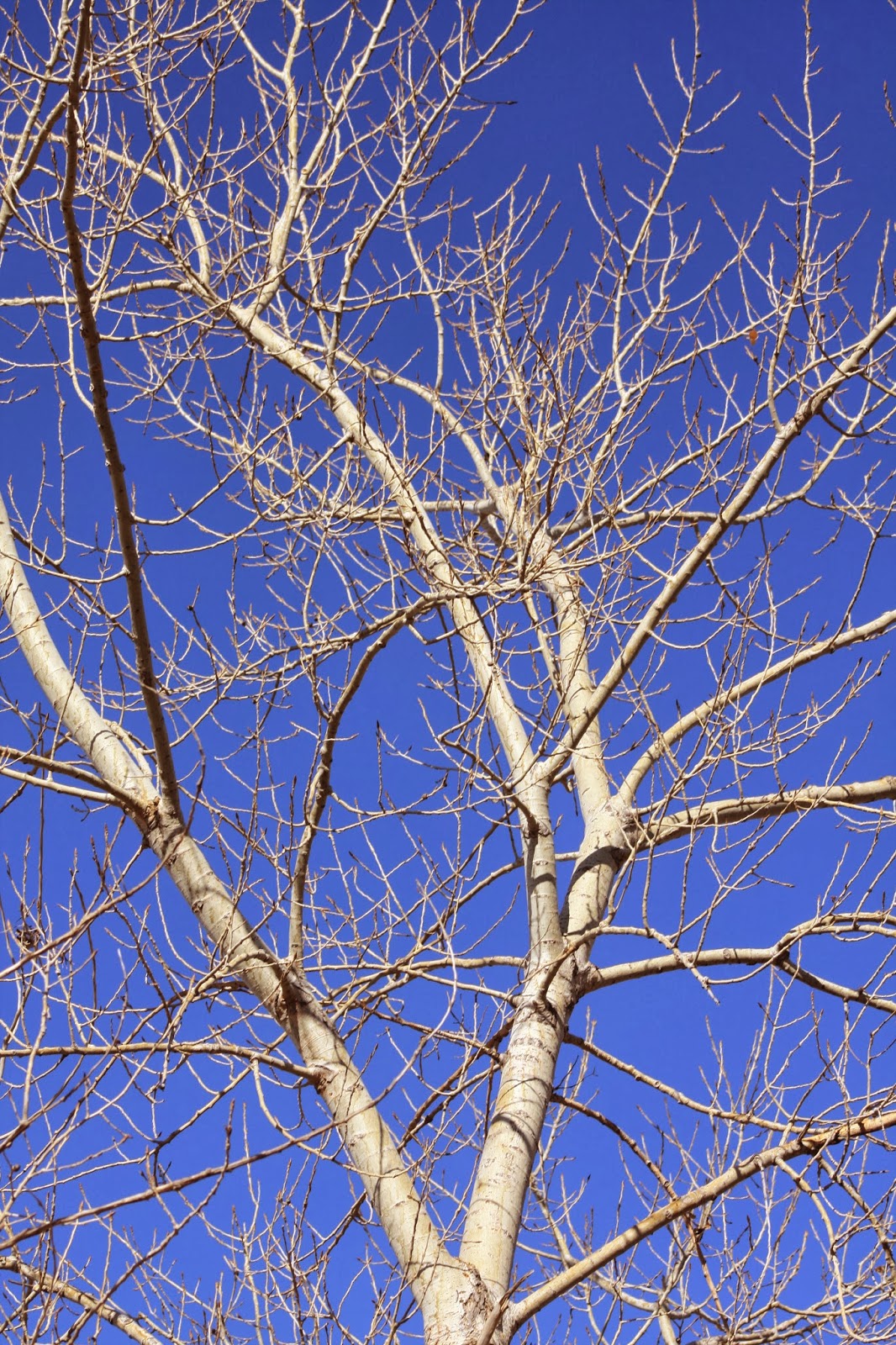 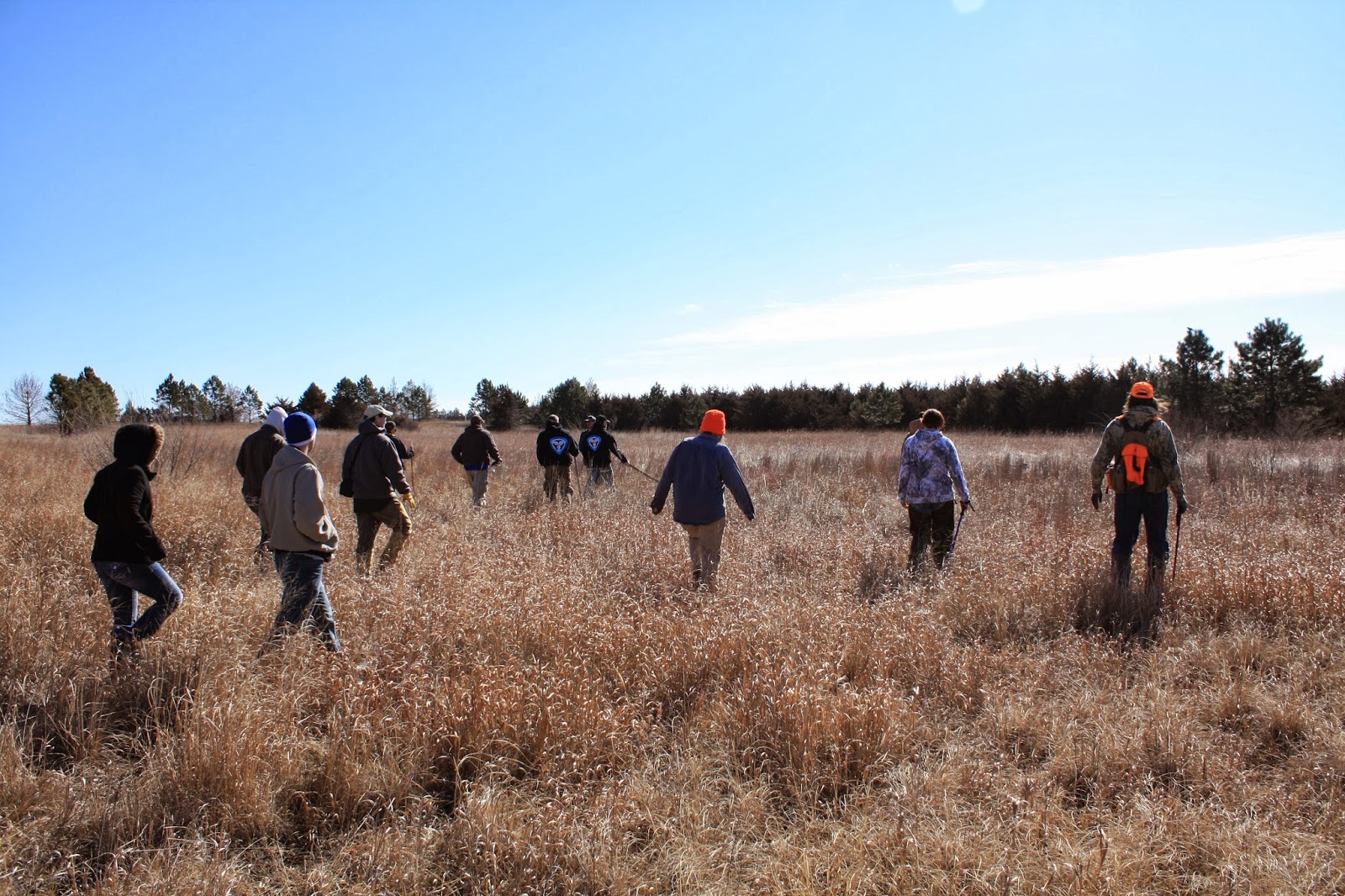 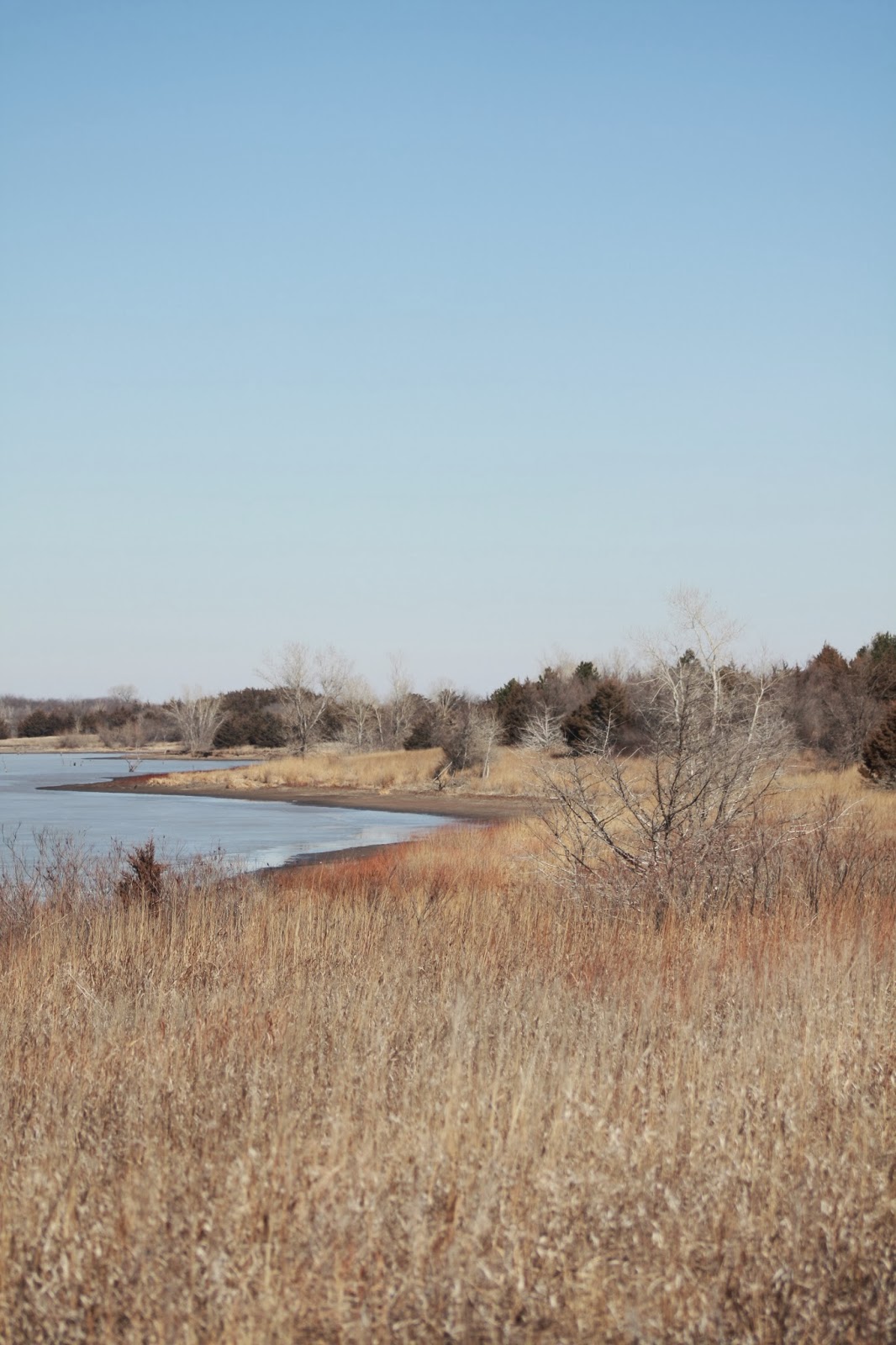 Stekoa was first up and flew actively, keeping always ahead of the field and watching alertly, but owing perhaps to a stiff wind, no quarry was spotted. I finally called him down, but it took a few tries: one of the items in my tidbit bag was a rabbit kidney surrounded in soft white fat, and Stekoa's jesses twice slipped through my greasy fingers as he snatched a tidbit and bated off the fist. While I was waiting him out, he caught a deer mouse in a cedar tree. Finally, on the third attempt, I called him down and got him tethered, and to my surprise he stood the fist well on the hike back to the car. 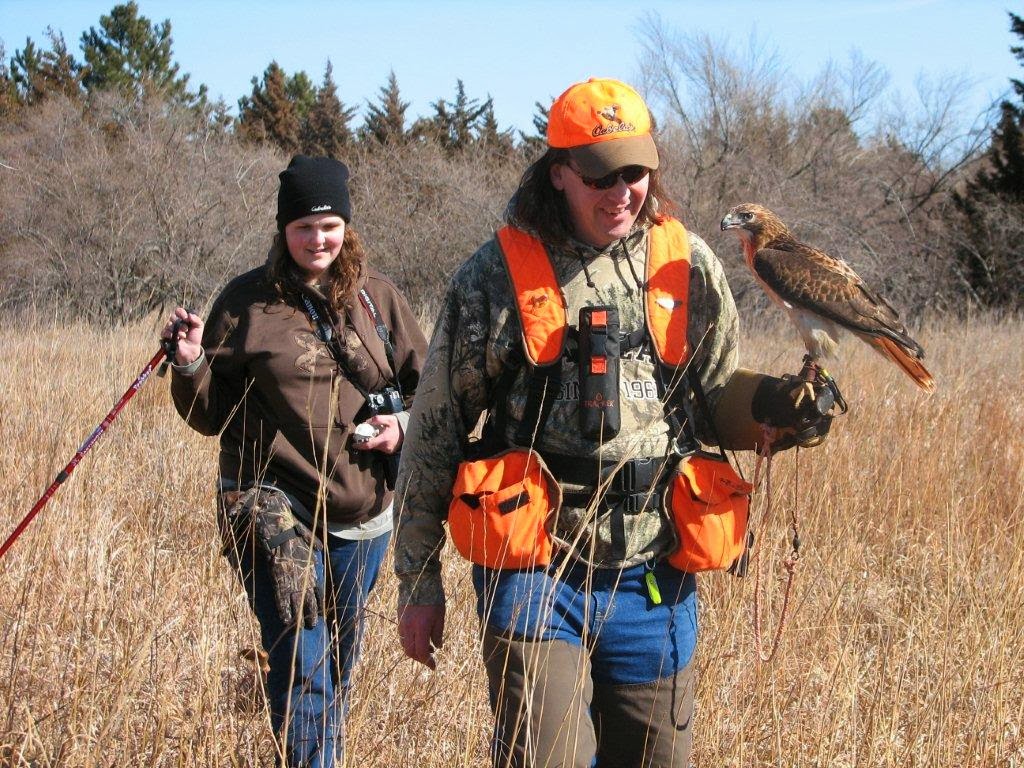 We relocated to a line of riparian woods along Dry Sandy Creek, where Rick Fariz, a recent transplant from Florida, took his turn. His intermewed passage female, Melissa, is a squirrel-hawking veteran, and chased both bushytails and cottontails before catching one of the latter flushed from the woods out into a field of tallgrass. 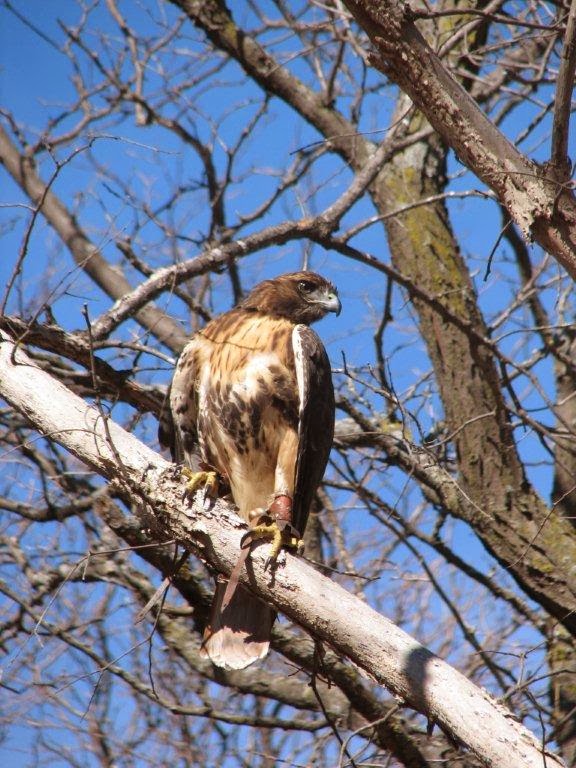 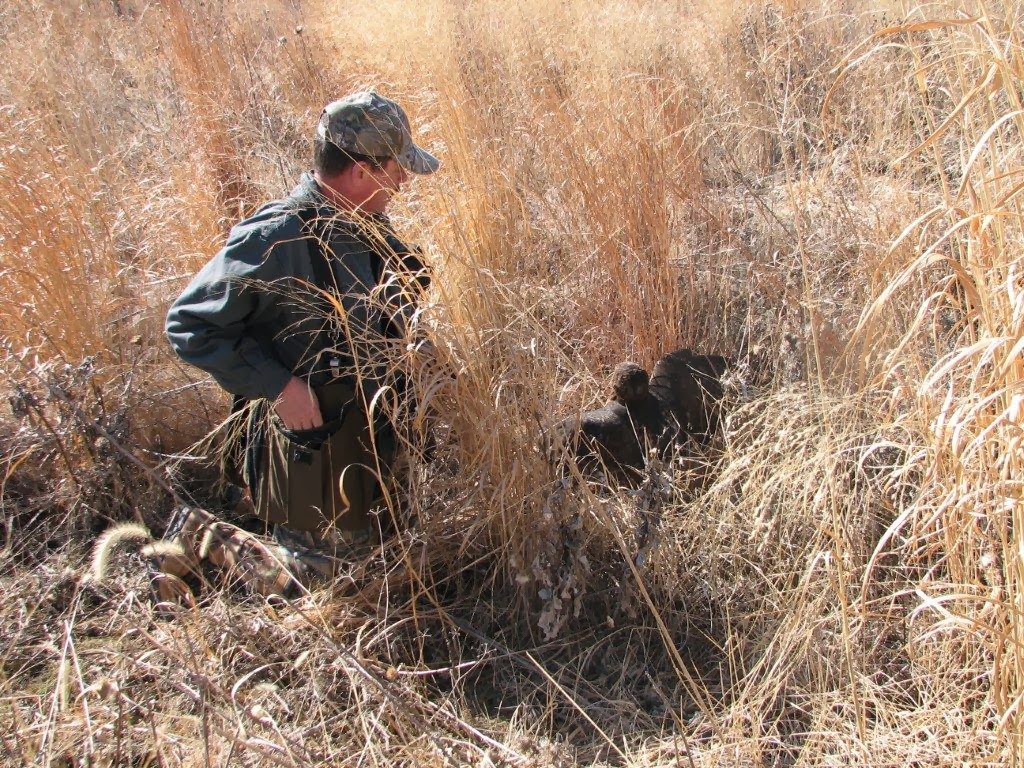 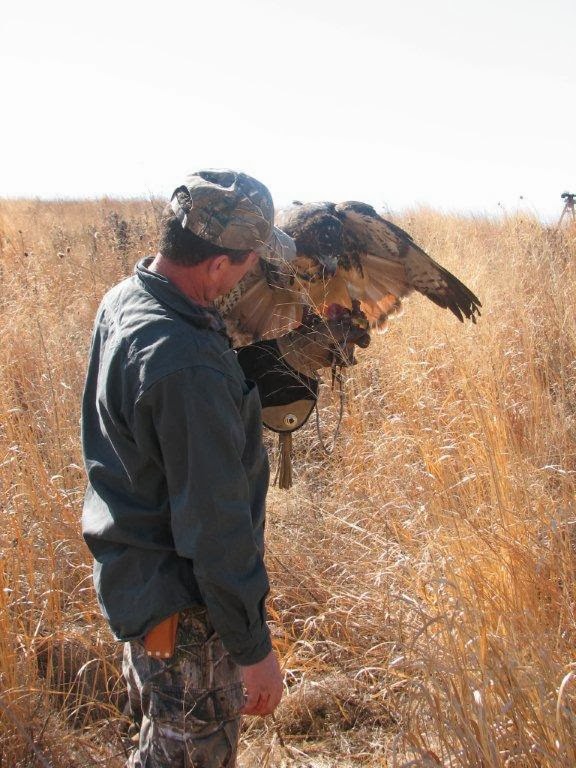 Dry Sandy, incidentally, lived up to its name, with not a drop of water and a deep bed of sand and fine gravel. Flotsam hanging on the low branches of the trees proved that it at least occasionally runs deep. In the meantime, though, it was by far the easiest route back to the vehicles. 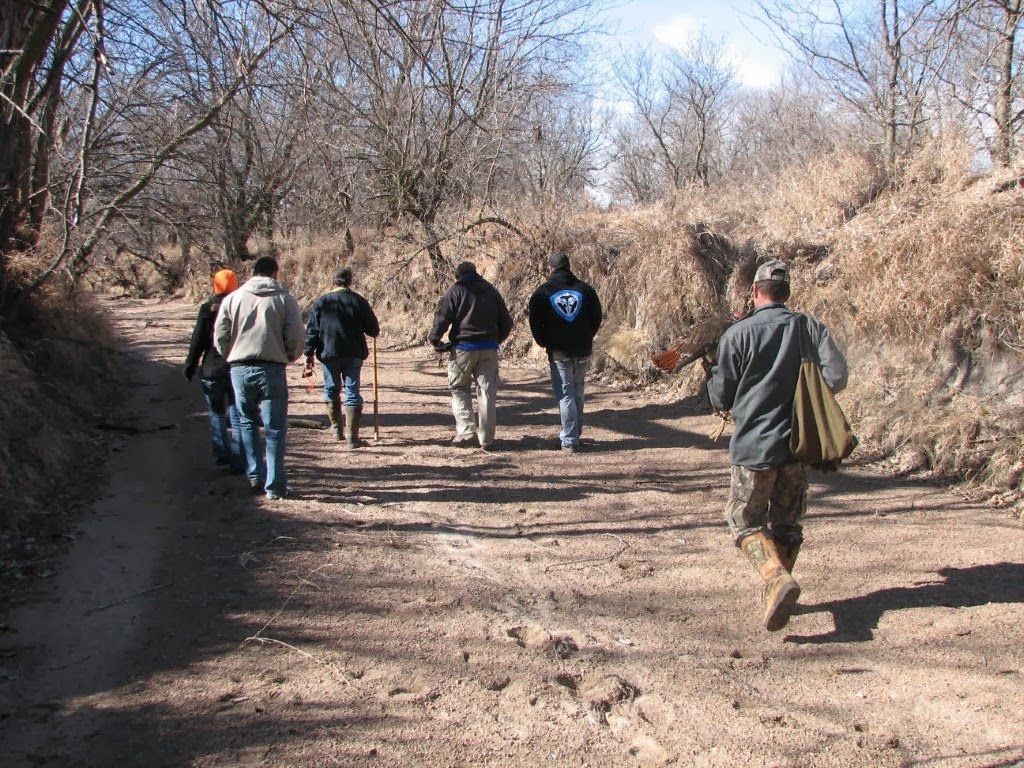 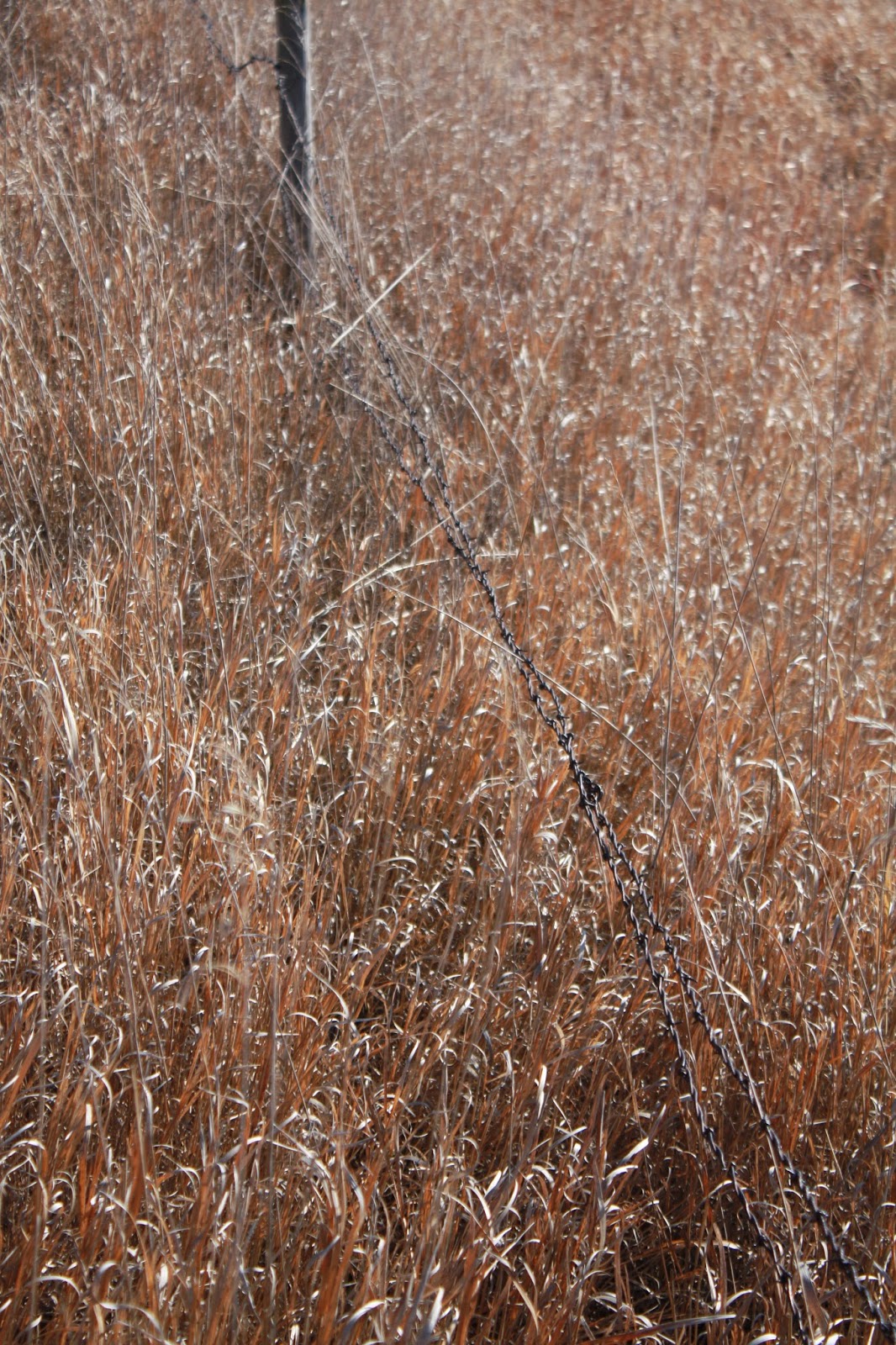 We again moved a short distance to fly Amanda Kaufman Escobedo's passage tiercel, Storm. He got one good flight at a rabbit, but the only other game flushed was a covey of quail. Stormy chases bunnies with enthusiasm, but so far hasn't shown much interest in birds. Amanda called him down soon afterward, as this had been his longest hunt to date, and she didn't want to push him too far. 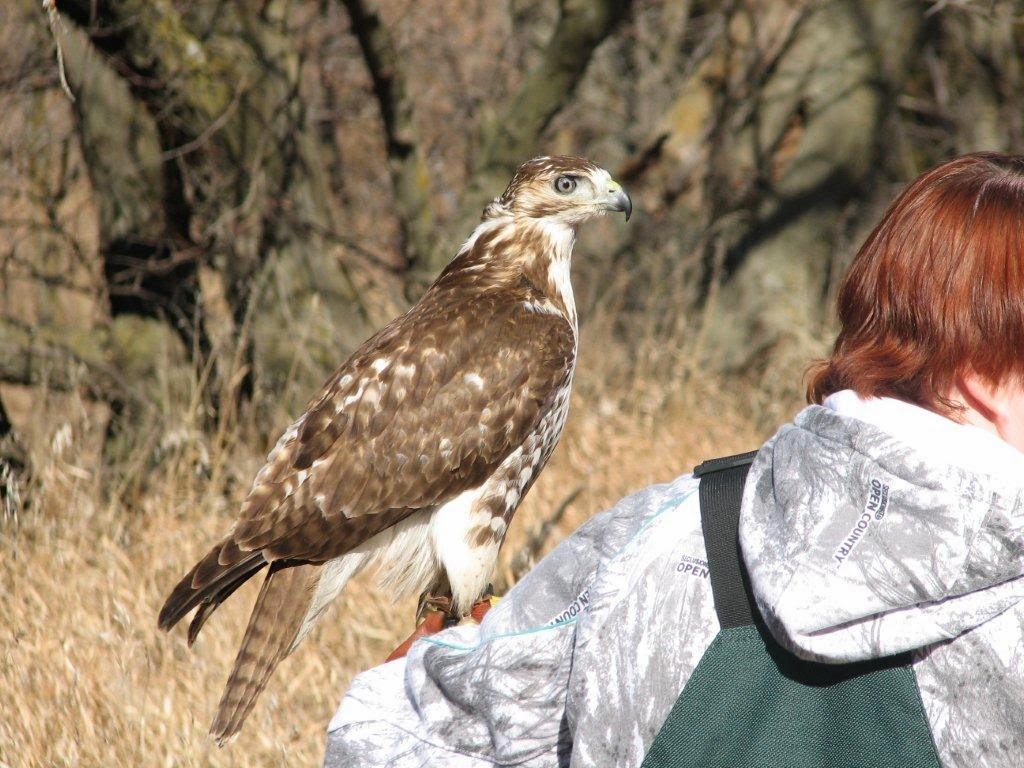 Finally, we moved back to the section of Dry Sandy Creek that we had hunted with Melissa, and got Stekoa back out. Amanda flushed a rabbit that ended up running along the edge of the creek bank, almost directly under Stekoa; when he hit it, the two of them tumbled down the bank to the sandy bed. Stekoa held on just long enough for me to get hold of the rabbit, then jumped clear, evidently ready to keep hunting.

Not too much later, we flushed a rabbit out in the field adjacent to the woods, and Stekoa bound to it. Whether he let it go or it just struggled free, it ran off just before I could grab it. (I'll take the error on that one, and credit him with two bunnies.) Stekoa's the sort of hawk who would rather hunt than eat, and he still wasn't ready to call it quits, so we continued on a bit longer; after catching another deer mouse, he condescended to accept an offered rabbit leg, and we called it a day.

Other raptors spotted throughout the day: An immature Cooper's hawk flew alongside Jessa and me as we left Lincoln, giving us an extended look and again whetting my appetite for a small accipiter. (I still miss my passage sharpie, Talkeetna.) Numerous redtails were spotted on the way, and two bald eagles (a juvenile and an adult) passed overhead, apparently following the Blue River south of Milford. A couple more baldies were seen high overhead while we were hawking, and several short-eared owls flushed silently from the cedars as we searched for rabbits during Stekoa's first outing. 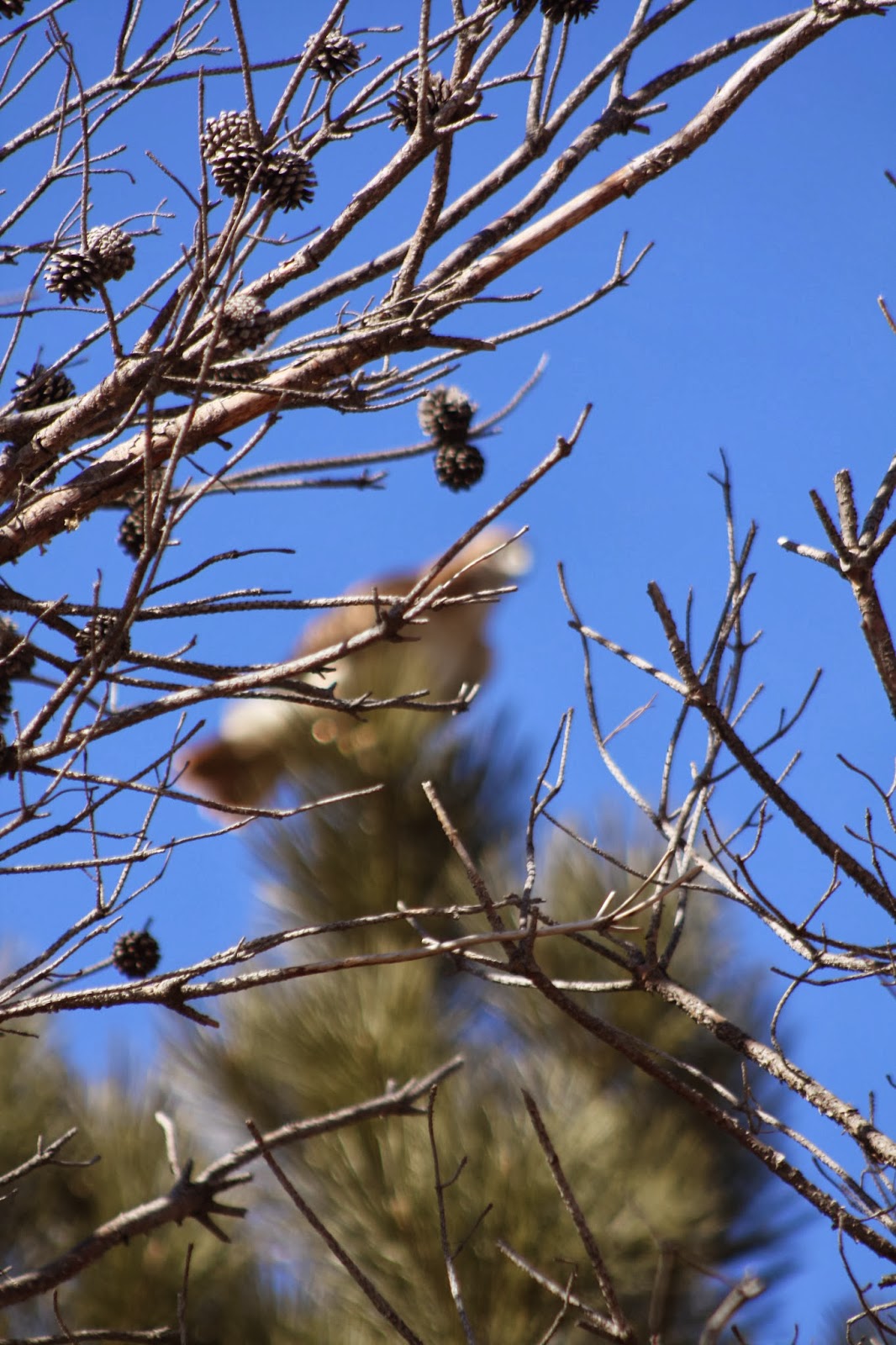 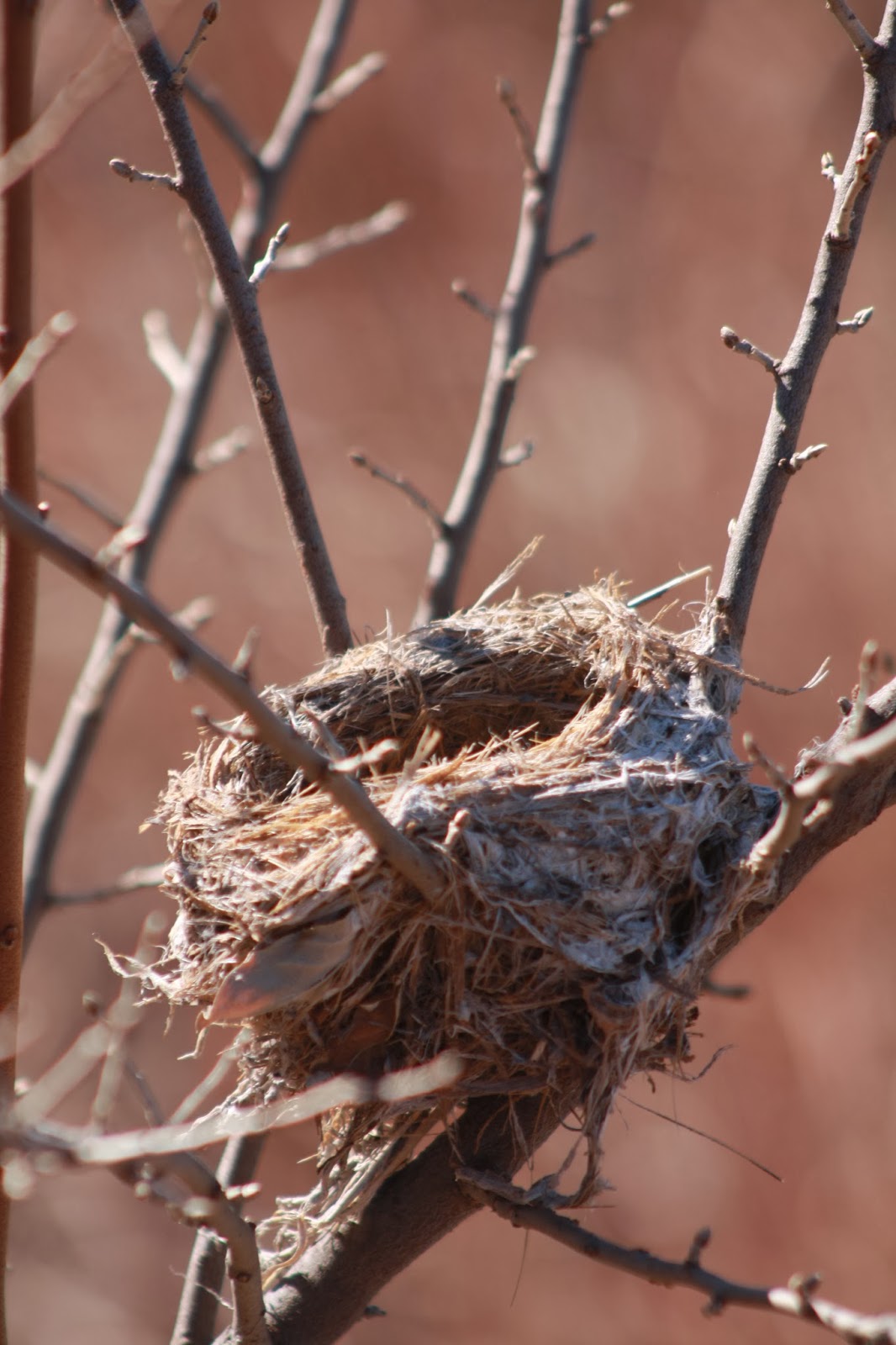 Mountain goats (Oreamnos americanus) are so agile that they've lent their generic name to a rarely-used word—oreamnosis—for leaping adroitly, whether that be physical leaping or metaphorical leaping, as from idea to idea. (For a quadruped whose preferred habitat includes sheer cliffs, it pays to be sure-footed.) But clearly their Capra cousins are no slouch, either.

Posted by Mark Farrell-Churchill at 2:32 PM No comments:

One of the nice things about hawking, as any falconer will attest, is simply that it gets one out and about, and many of its rewards come in the form of serendipitous finds. One day earlier this winter I happened to park in a new spot at one of my frequently-visited hunting grounds and when, at the end of the day, I field-dressed the rabbit my hawk had caught, I noticed a hole in the ground surrounded for several feet in every direction by yellowed snow and delicate canine tracks: signs that a fox had been using that burrow quite actively. The gutpile I left that day was gone by the following afternoon, and I've left several subsequent offerings to the same fox.

A few days ago, while searching for rabbits in a new area, I found another hole, this one larger and marked with coyote tracks. This was in a narrow fringe of riparian woods; the "front" entrance was just a few steps into the woods from a cornfield. 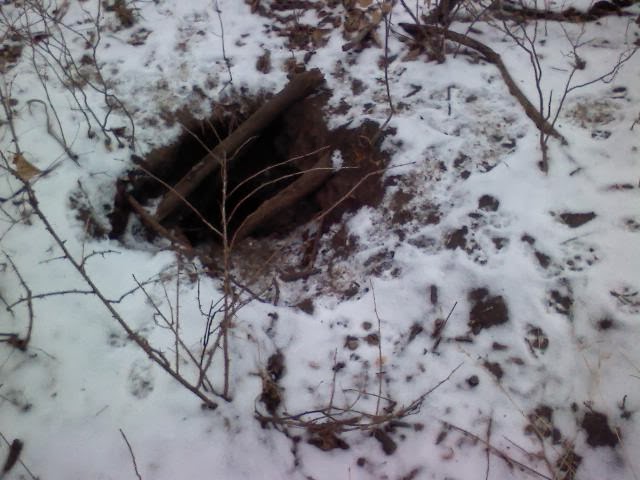 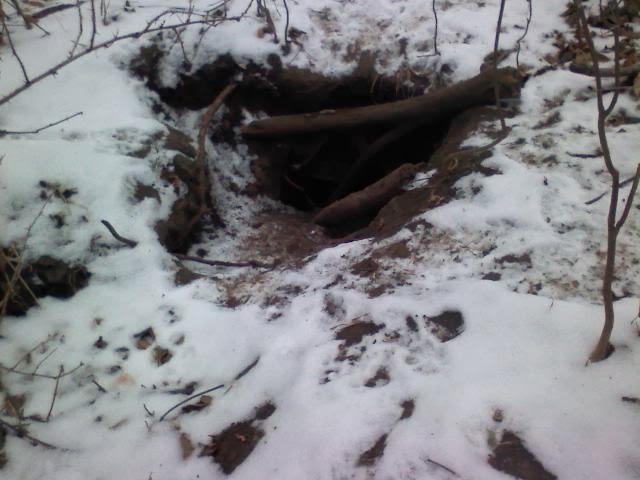 The "back" entrance, significantly tighter and better hidden, overlooked a (currently dry) creek down a relatively steep bank. 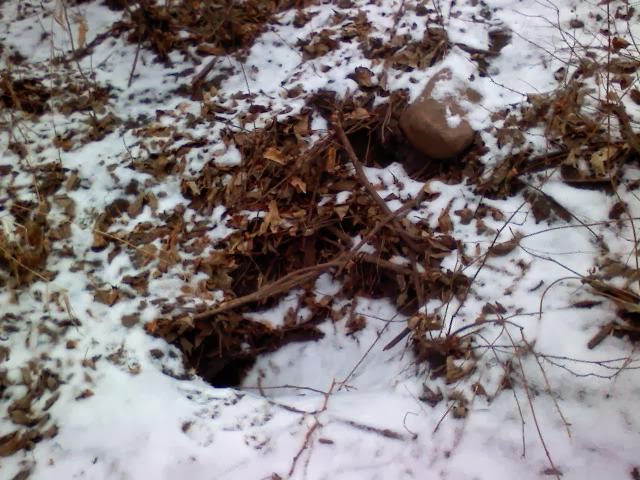 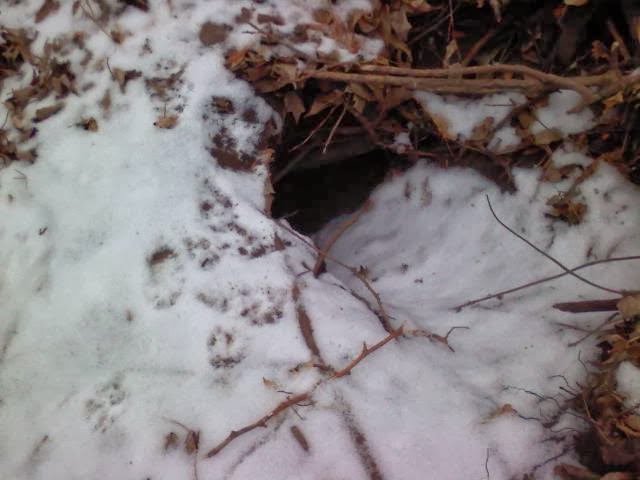 I wouldn't be at all surprised if this burrow is used for denning this spring. Situated at least a quarter-mile (and probably farther) from human habitation, in edge habitat, with access to water, this is essentially a textbook den location.


Posted by Mark Farrell-Churchill at 4:20 PM No comments: