Little boy at Home Depot: "I LOVE this store! You can buy plants! You can buy WATERFALLS!" Kid's got his priorities in order.


Posted by Mark Farrell-Churchill at 1:57 PM No comments:

Just for the day

At almost four hours away, Verdigre Creek is usually a weekend-long proposition—a long weekend, for preference—but for one reason and another we haven't made our usual pilgrimages this year. So out of desperation, Ellie and I recently made a day trip of it. We arose well before daybreak, drove through thunderstorms and torrential rains, and arrived to find that the weather had all been further south and the creek was flowing at normal levels.

At normal levels now, that is. Like much of Nebraska, especially northern Nebraska, Verdigre flooded this spring. Heraclitus was certainly on to something, and every time I've been back to Verdigre I've noticed slight alterations, but nothing so dramatic as this. One of our favourite spots, a dramatic S-bend above the bridge, had been rendered nearly straight, and more than one familiar pool was no more. But there were new pools, and gravel bars in spots that had previously been choked with reed canary grass. Better yet, there was fresh gravel in the creek as well, a boon to spawning trout. The creek's productivity was highlighted early on, when Ellie and I caught several small rainbows with parr marks, wild trout born of this very stream. 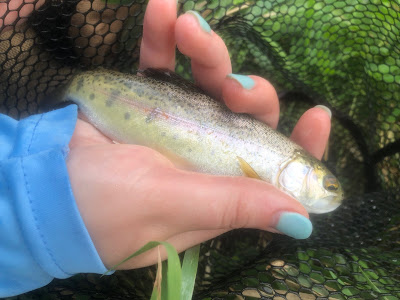 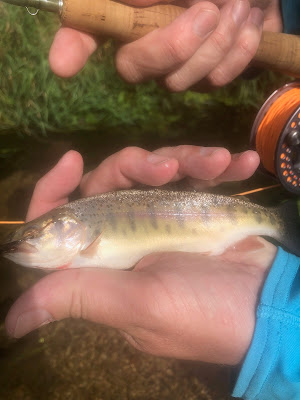 Later, Ellie was fishing to a big rainbow holding in a run below the bridge when a smaller trout darted out from under some watercress to take her nymph; it looked different from the start and, once netted, proved to be El's first brown. (Also wild; according to Game & Parks, browns were last stocked here in 1976.) 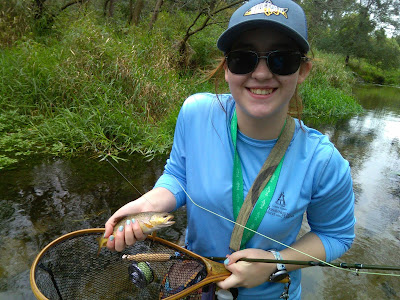 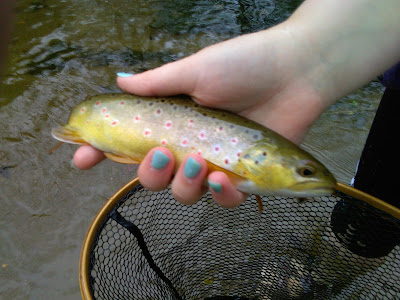 The drive back home to Lincoln seemed to go much faster than the drive up. That was down partly to more direct routing (in the morning, we had detoured to shop for on-stream provisions) and partly to better driving weather (the storms having passed to the east). But a good day's fishing—not to mention the prospect of good fishing in future, and the assurance that our favourite stream is still itself despite some changes in course—did its share to speed us on our way.

Posted by Mark Farrell-Churchill at 12:59 PM No comments:

I don't think this is likely to become a regular feature here on Flyover Country, but I wanted to have a go at a fly-tying tutorial. This is my favourite hairwing streamer, Farrell's Irish Gold. I have fished it on the trout stream occasionally, but it really shines for lough fishing, especially in the autumn. It has become my go-to streamer for stillwater trout; they can't seem to resist this impressionistic baitfish. 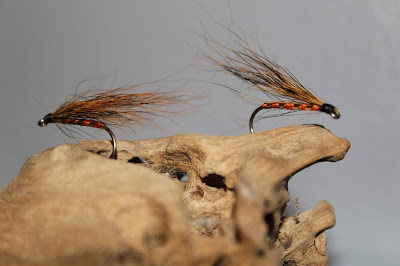 I generally use a 3X long streamer hook in size 8 (currently an Umpqua U301), but occasionally downsize to size 10 for crappie, and size 6 would be reasonable for larger trout. Spooled materials are black thread (I use UTC Ultra Thread in 140 denier; you want something on the strong side), orange floss (four-strand rayon from Danville's), and flat tinsel in gold (UTC makes a Mylar tinsel that's gold on one side, silver on the other; size medium is perfect for this fly). An orange-toned squirrel tail (more detail to follow) rounds out the materials list. 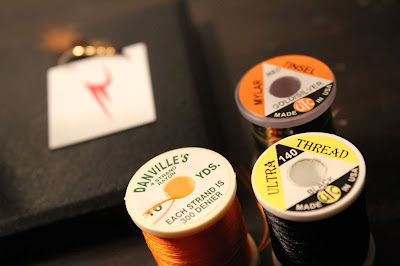 Start your black thread a bit behind the hook eye, taking touching wraps back to the start of the hook bend. (Incidentally, you could weight the fly with some lead or lead-substitute wire under the thread, but I prefer the slimmer look and improved versatility of the unweighted streamer. Split shot, tungsten putty, or a sinking leader can get the fly down just as easily. Or, don't go fishing without your bullets.) 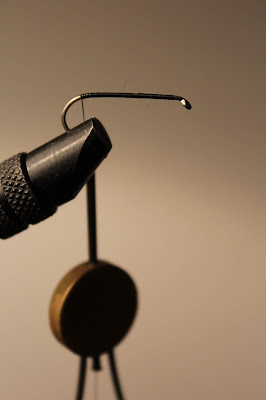 Lay in a single strand of orange floss, about halfway from the bend to the eye, and tie it down with the thread; then lay in the tinsel—silver side up—over the floss, and tie it down with thread wraps, which should have your thread back at the start of the bend. Now take the thread back to the initial tie-in point; using open spiral wraps over the floss and tinsel, then touching wraps the rest of the way, will help to even out the taper, but it doesn't need to be perfect anyway. 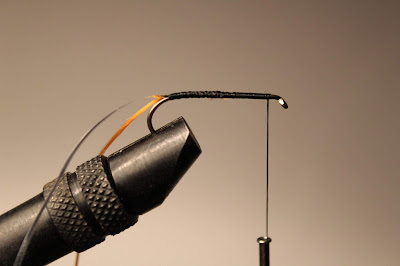 Hand-wrap the orange floss over the black thread to the initial tie-in point. This is perhaps the trickiest part of tying this fly, as the floss is prone to fraying. Avoid catching it on the hook point or the jaws of the vise, but be aware that even dry skin may be enough to cause problems. Secure the floss with a couple of thread wraps and snip off any excess. 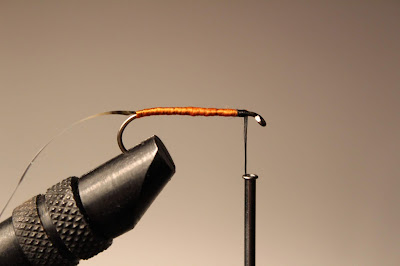 Next, wind the tinsel forward to the tie-in point. The tinsel having been tied in silver side up, the gold should now be showing. You'll want to pull the tinsel somewhat aggressively forward to create an open spiral that lets the orange floss show through; this is not a tinsel-bodied fly like the Mickey Finn or black-nosed dace. Again, secure with a couple of thread wraps and snip off the excess. 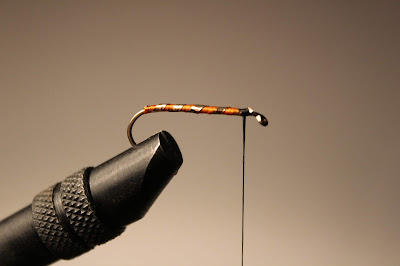 Now for the squirrel tail. I use locally-sourced (ideally, hawk-caught) red fox squirrel, Sciurus niger rufiventer; other species, such as chickaree (Tamiasciurus hudsonicus) in the Appalachians or red squirrel (Sciurus vulgaris) in Ireland or the UK, can be appropriate regional substitutes, but for this fly we really do want to keep to reddish-orange tones. 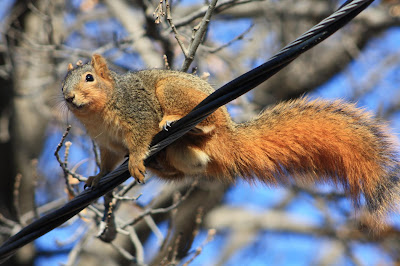 Snip a pinch of hair from the squirrel tail and tie it in, first using a couple of loose wraps to capture the square-cut base of the clump, and then tightening down to secure it. (Hence the strong 140-denier thread.) Keep making tight thread wraps to really bind down the hair and build a tapered head; I usually take at least one wrap behind and under the resulting wing to push it up a bit. Once the head is constructed, take two or three turns with a whip-finish tool and snip the thread off close. 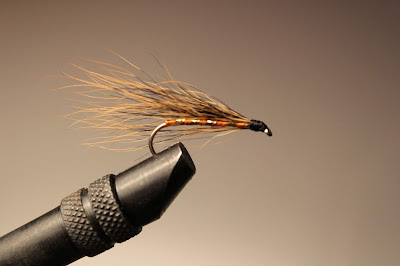 A bit of head cement can make the fly a bit more durable, but I usually don't bother with this step. Because the fly uses just a single strand of four-strand floss, I find it convenient to tie Farrell's Irish Gold in multiples of four. 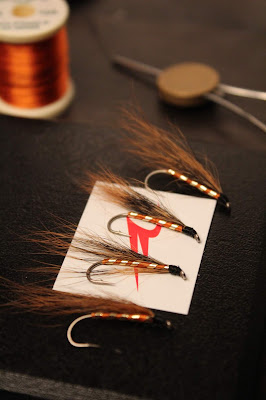 I typically fish this streamer on a sinking leader; an Airflo polyleader with a known sink rate lets me count it down if the trout are holding or cruising at a specific depth. While I use a Davy knot for dries and most nymphs, a loop knot imparts much more realistic action to streamers; I especially like the double figure-eight. And although I generally prefer a more moderate action, I keep a fast-action rod (the Three Forks model at left) handy for streamer fishing on the lough. 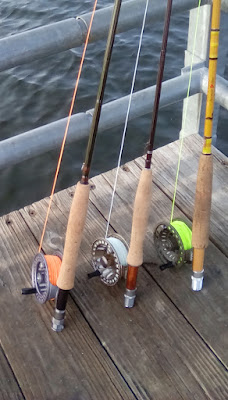 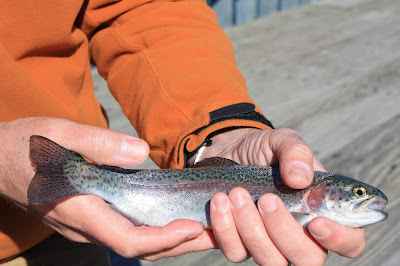 If any readers actually do tie this fly, I hope you'll let me know how it works out for you. Comments are always welcome.

Posted by Mark Farrell-Churchill at 1:25 PM No comments: