"But you have retired, Holmes. We heard of you as living the life of a hermit among your bees and your books in a small farm upon the South Downs."

"Exactly, Watson. Here is the fruit of my leisured ease, the magnum opus of my latter years!" He picked up the volume from the table and read out the whole title, Practical Handbook of Bee Culture, with Some Observations upon the Segregation of the Queen. "Alone I did it. Behold the fruit of pensive nights and laborious days when I watched the little working gangs as once I watched the criminal world of London."

No "leisured ease" for me, no farm on the South Downs, and it's doubtful I'd ever have the patience for such observations as Mr. Holmes would make, but I'm proud to share this distinction with him, however tenuous my claim may be: I am now a beekeeper.

Jessica has a certain fear of bees, but nevertheless acquiesced to my purchase of an empty hive this spring. Since then, it had remained empty: lacking either the funds or the time to acquire bees from another beekeeper or a pest-removals firm, we took a passive "if-you-build-it-they-will-come" approach. And this past Tuesday, a swarm of bees found us.

[These mobile-phone videos won't win any awards for clarity, but should suffice to give an idea of the activity level at the hive.]

Most people think of "a swarm of bees" as inherently aggressive, but in fact swarming bees are pretty mellow. As Jess said, "Of course they're happy—they're house-hunting!" After two days of intense activity, the hive seems to have settled down to a steady coming and going, and we're looking forward to being their landlords. Come next year, if all goes well, we'll be harvesting plenty of very local honey for our tea. 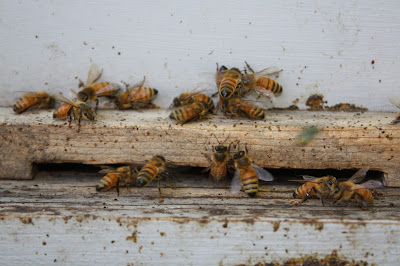 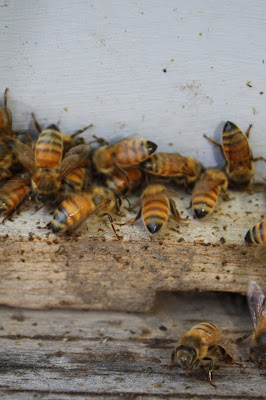 UPDATE: Well, they were our blurry bees. A few weeks after they arrived, activity at the hive dwindled and then ceased, the bees apparently having decamped. Easy come, easy go; we'll try again in the spring.

Posted by Mark Farrell-Churchill at 5:21 PM No comments: