The beach on Fenwick Island is worth billions of dollars and costs billions, but the one on Assateague is free and priceless.

Anyone who loves the Eastern Shore, or wants to learn just a little, should read "Three Stooges vs. Revelation" over at The Last Word On Nothing. It might help to know that Fenwick Island = Ocean City, and that "down the ocean" in Bawlamerese sounds more or less like "Danny Ocean". This essay explains why I have always preferred Assateague to Ocean City...so well that I wish I had written it. I'll have to settle for a link. RTWT.

Posted by Mark Churchill at 6:06 PM No comments:

That's one way to get ahead...

Libya's Muammar al-Qadhafi (pick your own transliteration) has been in the news quite a bit lately: Here he is (in a very restrained powder-blue uniform) celebrating the 40th anniversary of the coup d'etat that brought him to power... 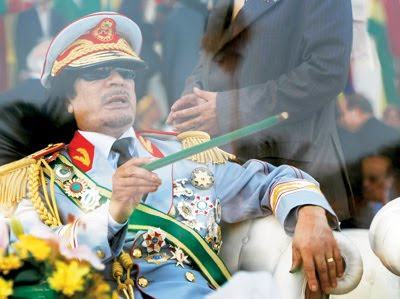 ...which reminds me of a story.

One of my military science instructors was a salty, very senior NCO I'll call "SGM Carter" (not his real name). Carter was a Green Beret who had made many HALO drops and had been awarded the Purple Heart numerous times in Vietnam. He also had extensive experience working with military units from other countries, and one day he happened to mention that among the foreign soldiers he had trained was a young Libyan named Muammar al-Qadhafi. So I asked him, somewhat impertinently, "Sergeant Major, this guy is a dictator. He could be General Qadhafi, or Generalissimo Qadhafi, or Field Marshal Qadhafi...why Colonel Qadhafi?"

Carter growled back at me: "Colonel's a pretty healthy promotion, considering he was a goddamned staff sergeant when he took over the country."

[Other sources have him as a captain at the time of the coup, but it's still a good story.]

Posted by Mark Churchill at 8:00 AM No comments:

Dark night of the soul

When in the Course of human events, it becomes necessary for one people to dissolve the political bands which have connected them with another, and to assume among the powers of the earth, the separate and equal station to which the Laws of Nature and of Nature's God entitle them, a decent respect to the opinions of mankind requires that they should declare the causes which impel them to the separation.

—Thomas Jefferson, The Declaration of Independence


At the risk of making this personal blog too personal, and as much as I'd like to avoid the subject altogether, Jefferson's point is as valid with regard to individual persons as to collective peoples. So, a few words on my current situation.

My marriage was, for many years, a good one. There was love, and humour, and friendship, and of course a beautiful, wonderful child. But, as the years went on, there was also mental illness. There was distance, and despair, and ultimately there was betrayal. And so on Valentine's Day, when so many couples were celebrating their relationships, I was consulting an attorney, seeking to dissolve a marriage I had hoped would never end.

This is one of those times when "being a writer" (whatever that means) is no help, because words are simply not adequate to describe the shock, the hurt, the anger, the sadness, the anxiety. All I can say is that this has been an interesting experience, of the sort I would not wish on my previous worst enemy. In the last two months, I have questioned everything I ever believed, including things I knew for certain to be true. I have made several plans to take my own life, not because of any inherently self-destructive tendencies but, paradoxically, out of a sense of self-preservation, a desire to limit my suffering. If there's a silver lining to existential crisis, it's this: I have been finding out who my friends are—and who they aren't.

I'm happy to report that thus far I have resisted both nihilism and suicide, re-examined and ultimately reaffirmed my beliefs and my values, and even nurtured a hope that I might be able to build a new life for myself and my daughter. The first stirrings of that hope—grim determination might have been a better description—are what led me to contact a lawyer, to begin planning for a life after my marriage. I don't yet know what that life will look like, and anxiety for the future vies for attention daily with a dozen other kinds of pain, but I'm looking ahead. Every day is different, but in general the trend is upward. And that will have to be enough for now.

I hope to be writing again and back on topic soon...
Posted by Mark Churchill at 7:59 PM 4 comments:

The Lincoln Journal Star reported earlier this week [full article here] that two of Lincoln's own peregrines have taken up residence on the Westar Energy building in Topeka, Kansas. The tiercel is Boreas, fledged from the Capitol building in 2007—I have written about the "Four Winds" clutch [link], and I'd like to think he is the one I witnessed catching a bat in the Capitol spotlights. The falcon is Nemaha, from the 2009 "Rivers" brood.

There is a camera at the Westar eyrie [link]; select "side cam" and follow the log-in instructions provided. (The "front cam" icon links to an archived video.) Nemaha is apparently on eggs right now. Over 800 videos from the Westar cameras have been posted on YouTube. Most are of the previous pair, Doorly and Hope, both of whom were hatched on the Woodmen Tower in Omaha (1999 and 2002, respectively), and who were evicted by the newcomers from Lincoln.
Posted by Mark Churchill at 1:13 PM No comments: