Hawking-for-hire: It's not just for airports and orchards anymore, as this BBC report indicates. The All-England Tennis Club has engaged a Harris' hawk to keep pigeons off the courts during the Wimbledon tournament.
Posted by Mark Churchill at 7:54 AM 1 comment:

Okay, the giant mechanical spider is a bit cheesy, but the film technique in this Subaru Canada advertisement (by ad agency DDB Canada and Starz Animation) is creative, eh?

This was shot at Cayuga Speedway near Toronto, with the camera car zooming past 760 frames of animation to generate the kineographic effect. The image floats around a bit as the car accelerates, but then holds steady and in-focus as the driver maintains a precise speed and distance from the wall. Here's the making-of-the-video video:

Special bonus: This film, also by DDB for Subaru, will bring back memories for a few people who have been with me without a hawk in the car. Right, Ev?

From BBC Nature, this report on gyrs (east Greenland gyrs, anyway) as "secret seabirds", spending much of the winter on ice floes in the open ocean. While it has long been known that gyrs in coastal areas prey on seabirds, the species as a whole is considered to be dependent on ptarmigan—their ranges (omitting the new data from Kurt Burnham and Ian Newton) are almost entirely co-extensive. Apparently, however, some gyrs may specialize in seabirds year-round, not just when they are concentrated at rookeries during the breeding season.

Speaking of gyrs and ptarmigan, The Peregrine Fund hosted a conference last year on how climate change might affect the gyr and its prey species. This link is essentially an announcement of the conference, but I'm hoping it will eventually be updated to include the proceedings.

And here is the best of several gyrfalcon posts by Clare Kines at his blog, The House and other Arctic musings, which I am duly adding to my blogroll. HT Luisa at Lassie, Get Help.

Update: HT Steve at Querencia for reminding me of this story (BBC Nature again) on an ancient gyrfalcon eyrie.

Posted by Mark Churchill at 7:29 AM No comments:

In a recent column in the Lincoln Journal Star, local historian Jim McKee noted that Lincoln's first high school, built in 1870, was considered by some parents to be too remote. The worries: grassland fires and bear attacks. The Pershing Auditorium now occupies that site, on Centennial Mall (as that segment of 15th Street is called) between M and N Streets, in the heart of what is now considered downtown Lincoln. There has been much discussion about tearing down the Pershing, which is showing its age and about to be made redundant by a new civic center, but no one worries much about grizzly bears or "the red buffalo" anymore.

On the other hand, the downtown area does have some patches of green. Some of the little sidewalk oases are full of roses and tulips and the like, but more than a few utilize native grasses (notably side-oats grama and prairie dropseed) and wildflowers. These I especially appreciate, as I've recently started working downtown. Although I've had jobs that took me downtown (Baltimore and Atlanta) on a regular basis, never before have I actually worked in a downtown high-rise building, and it's taken some getting used to; the little squares of prairie grass (like the peregrines soaring overhead) help to make the concrete canyons tolerable.

[Outside the Great Plains Center, Seaman the bronze Newfoundland waits patiently among native grasses while bronze Lewis and bronze Clark get directions from a bronze Otoe man. The Jefferson medal (originally in bronze) is a nice touch, don't you think?] 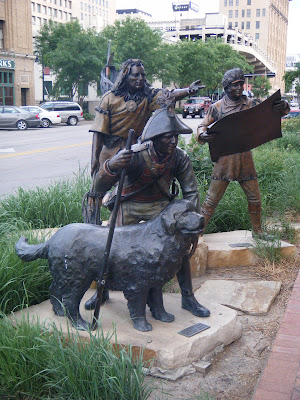 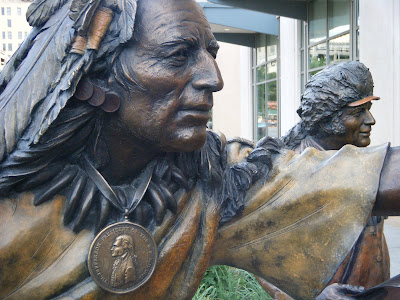 The urban environment presents unique challenges, but the folks who manage these little spots deal with the same fundamental paradox that confronts farmers, gardeners, and land managers everywhere else: the simultaneous difficulty of getting some things to grow and other things not to grow. I'll admit to having surreptitiously yanked a couple of weeds out of the ground myself: most pedestrians wouldn't recognize prickly lettuce or western salsify or common purslane growing among the prairie plants, and wouldn't much care if they did, but their presence offends me. While the concept of "ecosystem integrity" is essentially meaningless when applied to such tiny patches of "prairie", there's an aesthetic consideration I find it difficult to ignore. 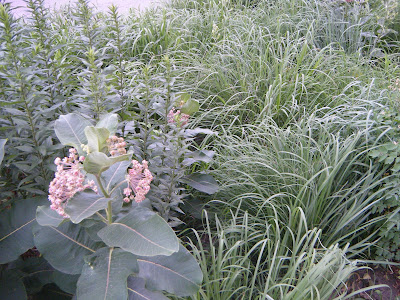 One neat spot I've discovered recently is this "green roof", planted by the Arbor Day Foundation (which has its headquarters in Lincoln) and visible from the patio of the Qdoba restaurant next door: 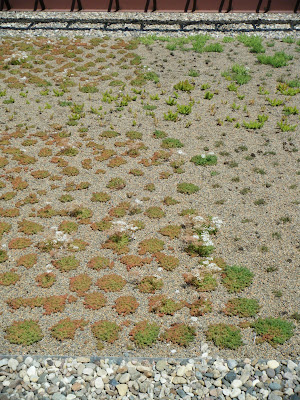 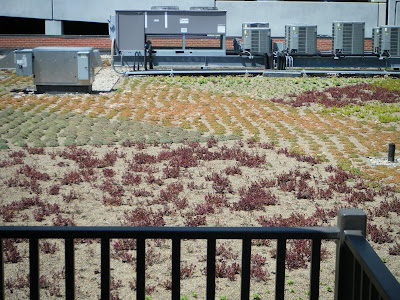 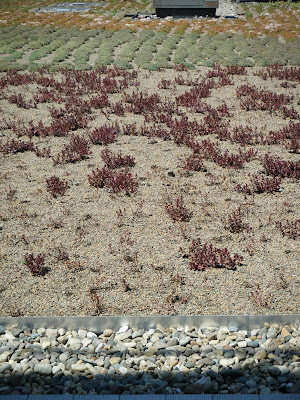 This garden [more here] is a work in progress (I was having lunch at Qdoba a couple of weeks ago when some of these plants were being installed, but of course didn't have my camera with me that day) and I'll be interested to see how it develops. These are, presumably, tough little plants for a tough environment. If this garden helps reduce the thermal extremes on this building, well and good; if it inspires other organizations to do the same, even better; but it's already helping by softening the edges of the city for people like me.

Posted by Mark Churchill at 4:55 PM No comments: 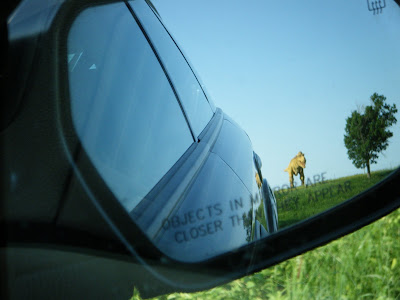 Posted by Mark Churchill at 7:56 PM No comments:

Karl Linderholm, Mitchell Renteria and I, along with Janet Stander from Raptor Recovery Nebraska, spent some time at the state Capitol building yesterday, assisting with the processing of an eyas peregrine. The little tiercel was fitted with an official USGS band as well as a marker band (98/M, if I remember correctly) and then had some blood drawn before being sprayed for ectoparasites.

[Yours truly with eyas and the gorgeous Lauren Dinan from the Nebraska Game & Parks Commission staff. Photo by Gwyneth Roberts/Lincoln Journal Star.] 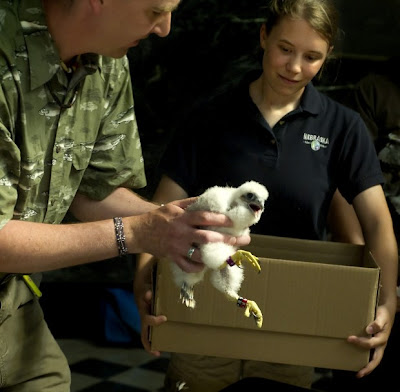 Three eggs were produced this year, and at least two hatched, but 98/M is the only one to have survived to three weeks. (Karl happened to be watching the webcam early one morning after a violent storm and saw the adult falcon carrying the body of a dead eyas away from the nestbox, an evident victim of exposure despite the falcon's best efforts.) As I told JoAnne Young from the Lincoln Journal Star [link], being an "only child" in a peregrine eyrie has both advantages and disadvantages: no competition for food resources, but on the other hand no siblings with whom to develop advanced flying skills; I sometimes—but fortunately not yesterday—call this the "Top Gun" effect. With first-year mortality rates in the 65-75% range, it's just about impossible to say which will be more important, but my suspicion is that the loss of his sibling(s) before fledging is likely to weigh in on the negative side for this little guy. 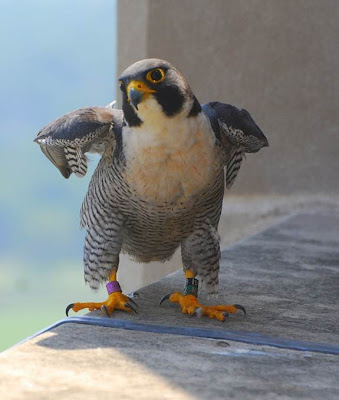