Ellie and I fished the floodwaters at Holmes Lake here in Lincoln yesterday. It was fun to wet-wade the fishing pier, and as a bonus we had it all to ourselves. The fishing was slow, just one fish each, but mine at least had the charm of novelty: the first walleye I've caught on a fly. It attacked a garishly tinselled woolly bugger variant (Postfly calls it an Olive Leech) and, thanks to the relatively cool water, put up a stout fight. 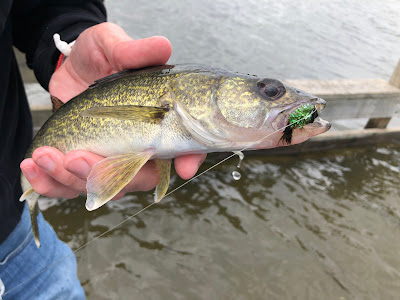 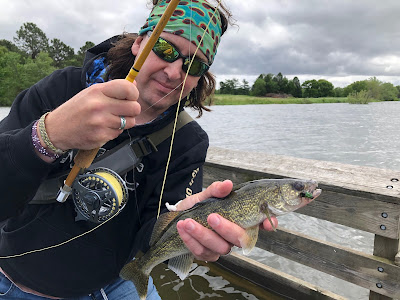 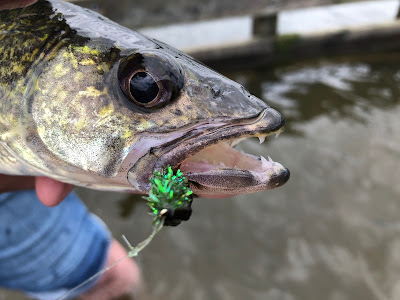 Ellie's one was a pretty black crappie, which I thought went very nicely with her light blue fishing shirt, watch band, and nail polish. A well-coordinated angler, to be sure!﻿ 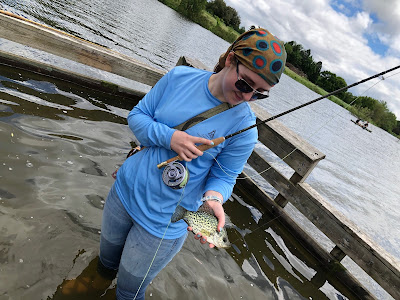 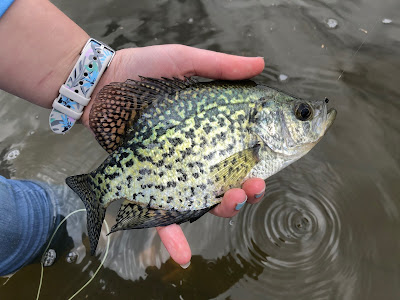 Posted by Mark Farrell-Churchill at 9:30 PM No comments:

Ellie and I were skidding in bluegill after bluegill the other day when this redear sunfish (Lepomis microlophus) made an appearance, not far from where we caught a couple last spring. 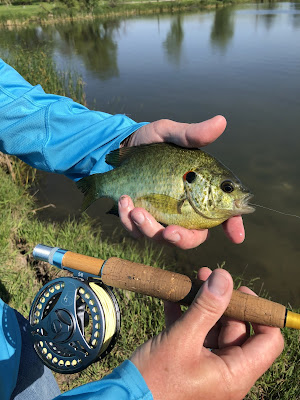 Redears spend most of their time deep in the water column, where they eat primarily snails and other molluscs, but come shallow to spawn. (At one time I planned to buy or tie some flies to imitate snails, but fortunately redears will take nymphs as well.) Their specialised diet has earned them the nickname "shellcracker" down South, except for Louisiana, where they are "chinquapins".

Posted by Mark Farrell-Churchill at 11:09 PM No comments:

While out fishing this afternoon, I encountered a good-sized bull snake (Pituophis catenifer sayi). I won't hazard a guess as to length, but I have no problem believing that they can reach 8 feet. 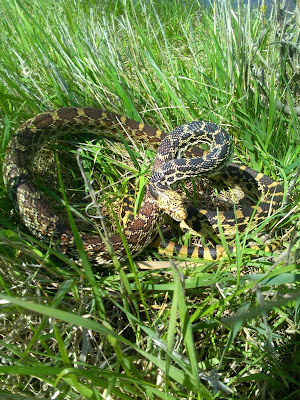 Bull snakes have a well-earned reputation for defensiveness, often mistaken for aggression. This description of bull snake posturing, from Wikipedia, is spot on; today's snake did the whole routine when I got close with my mobile phone, the only camera I had with me:

Owing to its coloration, dorsal pattern, and semikeeled scalation, the bullsnake superficially resembles the western diamondback rattler (Crotalus atrox), which is also common within the same range. The bullsnake capitalizes on this similarity by performing an impressive rattlesnake impression when threatened. First, it hisses, or forcibly exhales through a glottis or extension of the windpipe. The end of the glottis is covered by a piece of cartilage known as the epiglottis which flaps back and forth when air is exhaled from the right lung, producing a convincing rattling sound. It also adopts a rattlesnake-like "S-curve" body posture as though about to strike. It commonly vibrates its tail rapidly in brush or leaves, and flattens its head to resemble the characteristic triangular shape of the rattlesnake. These defensive behaviors are meant to scare away threats, however, and not to sound an attack. 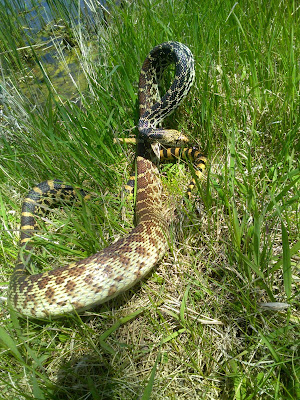 This specimen was on a narrow spit of land between a lake and pond; I'm sure it meant to pillage one or more of the red-winged blackbird nests nearby. 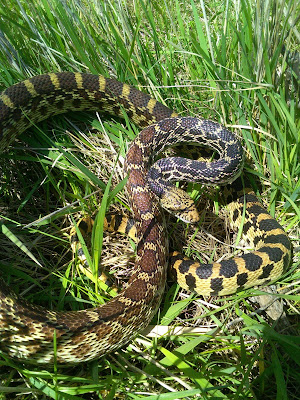 Posted by Mark Farrell-Churchill at 2:45 PM No comments: