This past Saturday, Jess and I took a much-needed road trip. This was to be a low-budget excursion, as we were essentially bereft of funds until our next paycheck, so we packed a cooler with the makings for peanut-butter-&-jelly and tuna sandwiches (that's two separate kinds of sandwich, not one abomination!), and hit the road fully aware we had only four dollars to our name if we needed to refuel. But hey, no pressure... 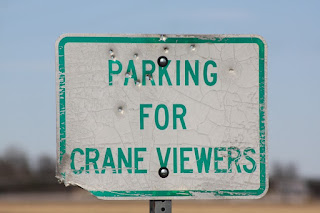 Our first destination was the Grand Island area, where we took in the sights and sounds of the sandhill crane migration throughout the morning.

[Windmill and the Doniphan water tower in the background.] 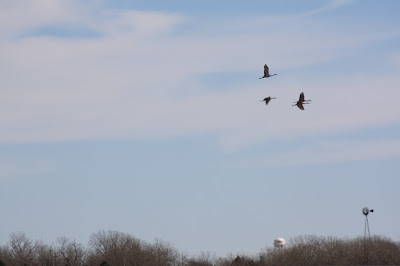 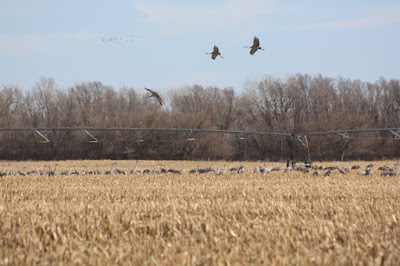 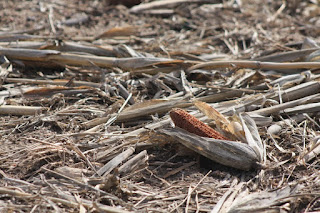 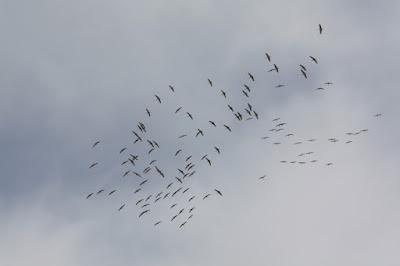 [These ones are all on the same flight plan.] 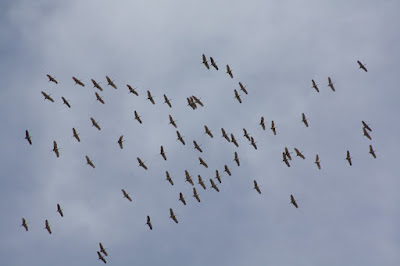 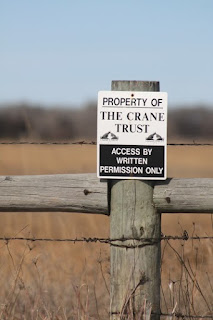 As always, there were plenty of geese as well, mostly snows and Canadas, with a few specks (white-fronted geese) mixed in. (And presumably some Ross's geese, too, but I've never been able to definitively single one out.) 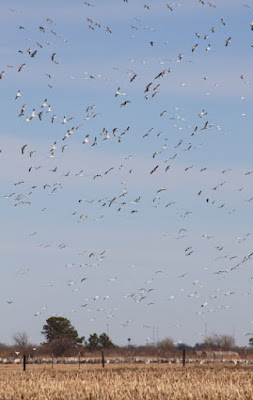 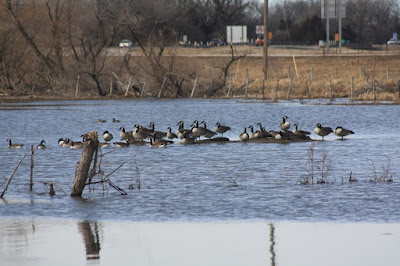 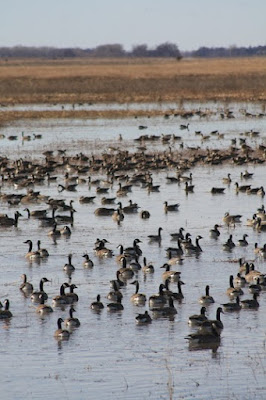 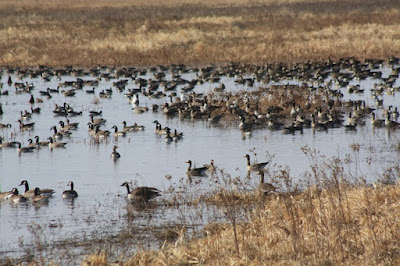 The raptor-watching was good also, highlighted by this pair of bald eagles and a merlin with what I believe to be a sora. (The merlin photo is mine, the rest are by Jessa.) 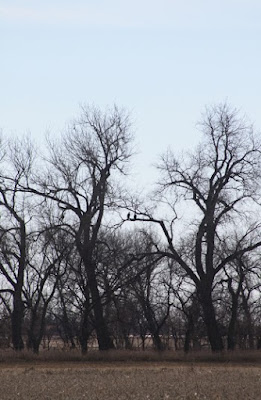 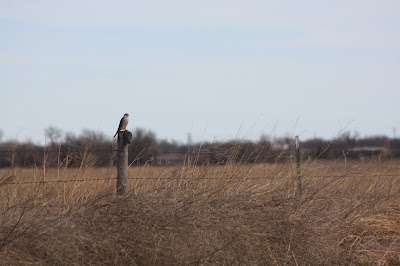 Raptors, more specifically trained hawks, were the main focus for the afternoon, as we drove past Kearney to meet up with Chris Remmenga at Elm Creek. Stekoa was up first, and took two rabbits in a small patch of woods in the corner of a pivot-irrigation field. 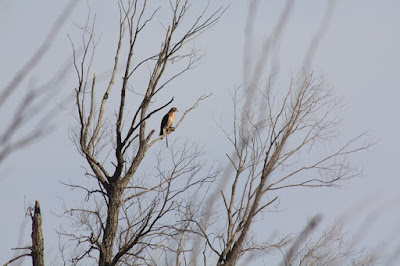 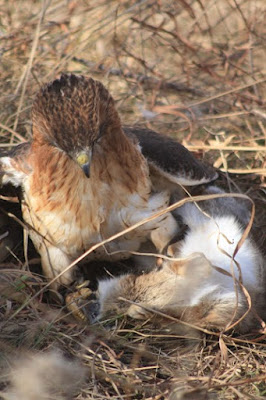 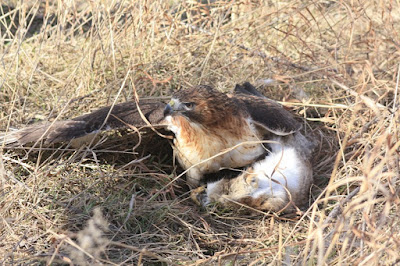 [Poles make me exceedingly nervous, but the lighting in this photo by Jess almost makes up for it.] 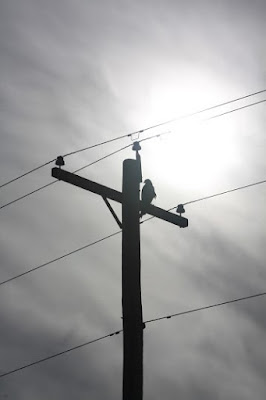 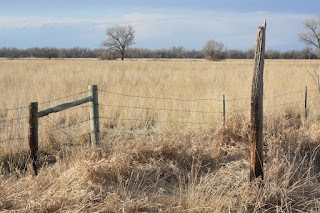 Once Stekoa was through, we drove a couple of miles to a section of prairie where Chris flew his ferruginous hawk, Dega. She was extremely attentive, and obviously a pleasant hawk to handle (I hate to think what a nasty-tempered ferrug would be like!), but unfortunately we only flushed one rabbit for her; it got up very close, dodged Dega's attack, and then disappeared into the tall grass and could not be re-flushed. Chris decribed Dega's acceleration thusly: "Off the fist, she starts like a redtail; if the flight goes long enough, she finishes like a goshawk." 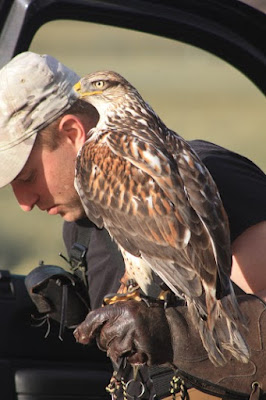 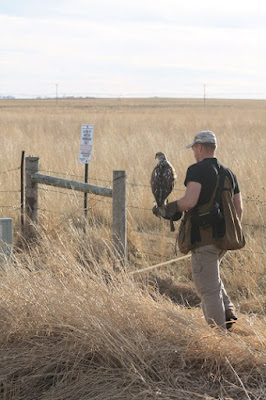 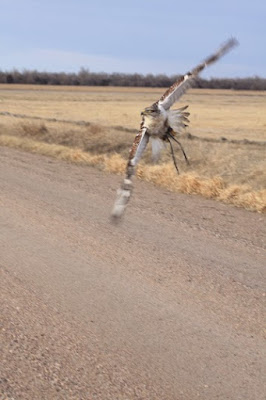 Typical of a ferrug, Dega likes to perch on the ground from time to time, and this is when she looks her most aquiline. Note the small feet; Chris reports that Dega doesn't grip the glove, and that consequently carrying her is "like trying to balance an upright 4x4 post". 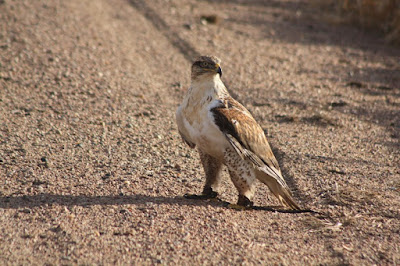 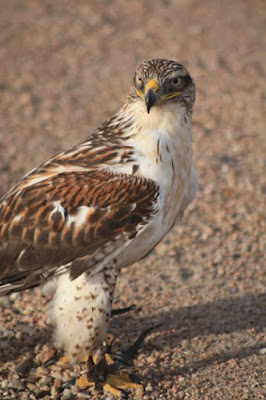 The drive home was uneventful and leisurely; we eschewed the interstate and maintained a deliberately moderate pace on two-lane highways in order to save petrol, and were still on vapours by the time we arrived. (Even after spending the four dollars at a truck stop in Elm Creek.) As we drove, we mused an interesting duality: On the one hand, we were flat broke, absolutely without resources if we happened to break down; on the other hand, we'd just spent the afternoon hawking—in a world-class destination, no less—and were therefore among the world's most fortunate human beings. A PB&J sandwich can taste pretty good when it's the sandwich of kings...

Posted by Mark Farrell-Churchill at 6:19 PM No comments:

Jess and I recently trapped a musket Cooper's hawk that had taken up temporary residence in a warehouse. A bit skinny, but a couple of days' supplemental feeding by Raptor Recovery Nebraska took care of that. He was feather-perfect and sorely tempting; if I had more time, I'd have loved to keep him and train him. 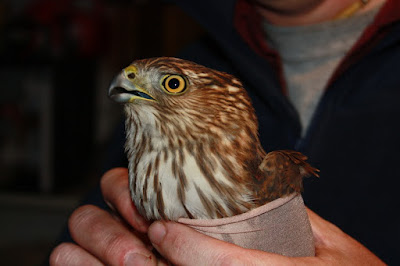 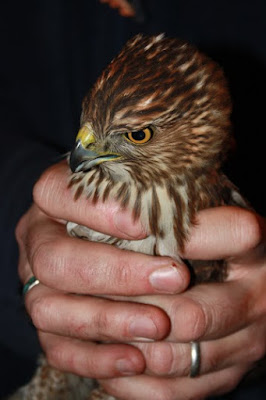 Maybe in the fall...

Posted by Mark Farrell-Churchill at 7:45 PM No comments:

As a bunny hawker, I've always been especially proud to host nesting rabbits in the garden. Now, Jess provides proof that even our front porch is rabbit habitat. 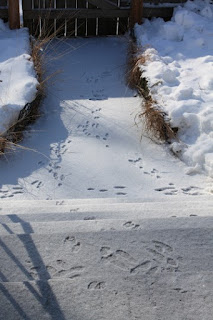 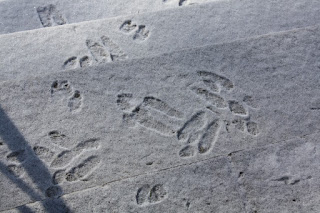 The following reflection appears in the 2016 Lenten devotional booklet for First-Plymouth Congregational Church here in Lincoln:

And he withdrew himself into the wilderness, and prayed.
—Luke 5:16

When, at the age of 15 or so, I took my leave of the Catholic Church and Christianity generally, my grandmother called me a heathen. At first, I was hurt that she had misunderstood me; I was not renouncing spiritual life altogether, just claiming a path more authentic to my own experience. But over time, I've come to embrace the term: heathen, one who lives on a heath.

So what is a heath? A heath is an expanse of shrubland habitat, usually with acidic or otherwise relatively infertile soil. Like the closely related landscapes known as moors, heaths have traditionally been considered waste areas. I've been privileged to spend time on both heaths and moors, and I tend toward a quite different view. In my experience they are abundant in both wildlife and edible fruits, including blueberries, cranberries, huckleberries, raspberries, strawberries, and wild plums. They may be "wastelands" to the farmer or the industrialist, but to the hunter of game or the gatherer of wild foods, heaths are places of plenty. 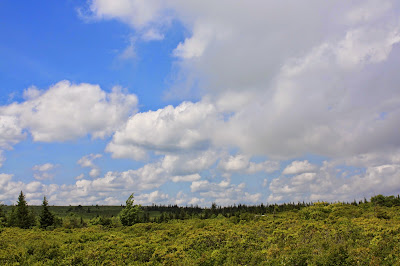 If heaths can feed the body of one who knows them well enough, they are perhaps even better suited to feeding the soul of one who approaches them with the right spirit. Being sparsely settled or uninhabited altogether, they tend to be quiet, peaceful places deeply conducive to reflection. Can it be a coincidence that both John the Baptist and Jesus sought solace and solitude in the wilderness? What better place to seek God?

My grandmother was neither a naturalist nor a philosopher, and while I love her and owe her much, it must be said that my grandfather was ultimately more influential. It was he who taught me to fish; he (and my mother) who gave me an appreciation for birds; he who set me on the path to wandering about on heaths and moors. And while he was as devout a Catholic as his wife was, I do not recall his expressing any concern about my departure from the Roman Church. He knew, I suspect, that I was baptised to what a friend of mine calls the Church of Field and Stream; that like Jesus and his elder cousin, I found God everywhere and not just in the temple. His acceptance, and that of my parents, gave me confidence in my own sense of spirituality, and helped make me who I am today.

So yes, a heathen. A happy eater of locusts and honey. A God-fearing heathen, at peace in the quieter spots in the world.

Posted by Mark Farrell-Churchill at 7:34 AM No comments: