All in due haste

Somebody has lit a fire under these guys to get this done in due haste.

In what appears to be a parting shot at any semblance of meaningful environmental protection, the Bush Administration is attempting to fast-track (really fast-track) the review of public comments on proposed changes to endangered-species rules.

The changes? Well, when considering the potential effects of federally-reviewed projects such as dams, power plants, etc. on endangered species, concerns about greenhouse gases would be dismissed a priori—and, if that's not incredible enough, the advice of federal biologists at the U.S. Fish & Wildlife Service and the National Marine Fisheries Service would not be sought. Whiskey...Tango...Foxtrot.

Now, it's reasonable to assume that a significant portion of the public commentary might be in opposition. Is that a problem for the administration? Not at all. The U.S. Fish & Wildlife Service proposes to bring in a team of 15 experts (speed-reading experts, apparently) to review all 200,000 or so comments in a 32-hour session. Do the math: 200,000 comments, divided by the 32 hours devoted to the task, divided by 60 minutes per hour, divided by 15 team members sharing the workload. Each of the 15 experts will need to read almost 7 comments per minute. That works out to not quite nine seconds per letter—and I don't mean letter as in character, but letter as in note, missive, epistle, some of which may be several pages long.

This is beyond cynical, even for the Bush White House. Apparently one or more of the Interior Department's many lawyers pointed out that Interior was required by law to read the comments—and so the administration will adhere to the letter of the law while flagrantly trampling on its spirit. Why bother actually discussing or thinking about public opinion (or, indeed, the public welfare) when you've already made up your mind to disregard it?

Read the AP article here if you are even slightly disinclined to believe any of this. An attempt to ignore global warming, by rule, and bypass or ignore biologists on endangered-species issues—and then to gloss over public outcry—does sound like parody from The Onion, but that's really what has been proposed.

Posted by Mark Churchill at 4:26 PM No comments:

"If The Walls Could Talk"

Here's one for Christy, Andy, and other real and honorary Athenians: A new (to me, and probably to you) song from Guadalcanal Diary frontman Murray Attaway. (Never mind he's really from Marietta; he's an honorary Athenian, too.)

[When the video is done playing, you can access a video for "Litany" as well.]
Posted by Mark Churchill at 4:33 PM 1 comment:

I get the call a couple of times a year: "A hawk flew inside the building, and now it can't find its way out." Usually it's a small bird-catching hawk that entered a structure in hot pursuit of some English sparrows, and I've trapped a number of sharp-shinned hawks, Cooper's hawks, and American kestrels from commercial locations such as a lumberyard, a metal-plating shop, a brick factory, a warehouse-style furniture store, a document-storage facility... Today's job was slightly different: the bird turned out to be a haggard red-tailed hawk, and the building was the Nebraska Cornhuskers' indoor training facility at, yes, the Hawks Championship Center (named for a major donor, not in anticipation of visiting raptors). Fortunately the football team has an away game this weekend, and so the field house was emptier and quieter today than usual. 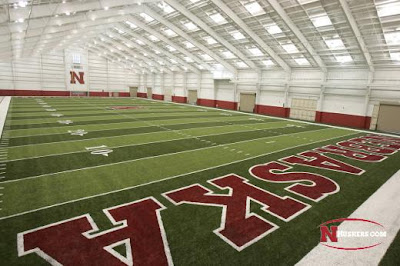 The Hawks Center is huge, comparable to an aircraft hangar—well, of course there's a football field inside, which should help to define the scale. Five national-championship banners (1970, 1971, 1994, 1995, 1997) are displayed prominently at one end of the field house; another banner hanging from a catwalk commemorates dozens of Nebraska football conference championships dating back to when they played in the Missouri Valley Conference (but omits a few conference titles in the pre-Cornhuskers era when they took the field as the Bugeaters). Everything in there is red and white, with the exception of the green portions of the field itself and two John Deere "Gator" UTVs.

Why the redtail flew in I'm not sure—the sparrow-chasing scenario doesn't really fit—but she had been there three and a half days and the athletic department, to their credit, called Raptor Recovery Nebraska, who in turn called me. How the redtail got in was more obvious: Visible in the photo above (borrowed from huskers.com) are several large garage doors which open onto an outdoor practice field. Once inside, however, hawks have a tendency to stay in the upper reaches of a building, flying among the rafters and ignoring the garage doors as a potential exit. Which is why I get the call...

Artificial turf makes poor habitat for wildlife, and a sharpie, Cooper's, or kestrel would be nearing the starvation point after several days in a building with no food, but a redtail in good condition could conceivably go a week without eating in warm weather such as we've been enjoying (or experiencing, at any rate). Hoping for the best, I deployed a bal-chatri, loaded with two white mice and an English sparrow, at the 45-yard line between the hash marks, then hid myself behind an enormous stack of red gym mats and settled in to wait.

A hungry hawk would have slammed the trap right away, but nearly an hour passed before Big Red deigned to circle overhead. A few minutes later, she landed on the turf three yards away—not an estimate, thanks to the specifics of the location—and walked around the trap peering at its inmates. (A friend of mine, also a falconer, calls this the "kicking the tires" routine.) Eventually she hopped on top and began footing half-heartedly, then flew off dragging the trap, a middle toe caught by a single noose—which promptly broke. The trap, of course, flipped upside-down, so even if she hadn't been made trap-shy by her brief entanglement...well, let's just say it's hard to casually saunter up to a bal-chatri, turn it over, and continue on under the watchful eye of an adult hawk without her getting just a wee bit suspicious of the easy meal.

I returned in the late afternoon with Ellie and a dark grey mouse, hoping that Big Red wouldn't make a connection between the suspicious, enclosed white mice and this more natural-looking offering. The facility manager opened one of the garage doors, we tethered the mouse near the cavernous opening, and once again settled in to wait.

Ellie's got a pretty good attention span for a nine-year-old, and enjoys hawk-craft to a degree, but eventually got bored and started asking when we could go home. I pointed out how lucky we were to get an insider's look at the NU facilities, and I reminded her that Big Red had been stuck inside for days, and therefore could make a much better case for boredom. Soon Ellie was rolling in the soft grass laughing at mock journal entries:

Finally, though, the hawk forsakes her habitual perches at either end of the field house for a beam above mid-field. She seems interested in the grey mouse, but perhaps a bit suspicious. At least she's looking now... Suddenly she's stooping toward the mouse. But wait—she's landed short of it by about...five feet? This is well out of bounds, so it's harder to tell. At last she strides over to the mouse, pins it to the artificial turf with a bright-yellow, nicely-taloned foot, and goes to work with her beak.

As Big Red eats—and fortunately, she takes a leisurely approach—Ellie skirts the far sideline until she is directly opposite the hawk, framed in the sunlight streaming in through the garage door. Then she rushes the hawk, sixty-odd pounds of nine-year-old girl blitzing three pounds of hollow-boned, feather-clad raptor; Big Red decides to take the hint (and what's left of the mouse) and flies through the doorway, free at last. She finishes her repast atop a chain-link fence outside the Hawks Center and then, at my approach, flaps out over the North Bottoms neighborhood where two crows rise from the trees in protest as she resumes her life out of doors.

Autumn, by the bushel or by the peck

The greatest service which can be rendered any country is to add a useful plant to its culture.

Sometime in the next week or so, we'll probably take a day trip down to Nebraska (by which I mean Nebraska City) to visit the Pendleton outlet and to lay in some apples and fresh-pressed cider from the orchards there. But we're not short on fruit at the moment: A friend from work sent me home a few days ago with a generous bag of heirloom apples from her family's small orchard. She couldn't tell me the variety—apparently her husband mislaid the diagram showing which trees are which—but they easily beat Granny Smiths for tartness. Ellie and I like a nice sour apple and, ignoring my friend's recommendation that they be used only for baking, we've been eating them at a good clip.

We haven't been the only beneficiaries, either. With the sudden bounty has come an uptick in the household Drosophila population. The fruit flies are a minor annoyance, but nothing more—except to our Siamese fighting fish (Betta splendens), who live in glass coffepots on the kitchen counter. For the bettas, the fruit flies are a boon equivalent to the apples for Ellie and me. When I catch the fruit flies loitering on the kitchen cabinets, I kill one or two with a tap of my finger, then step over to the coffeepots and let the water's surface tension draw the flies off my fingertip. The fish have figured out the routine by now, and as soon as I withdraw my finger, they float to the surface to suck down the flies.

The fox squirrels in the back yard, already starting to fatten up for the winter, get the apple cores. My redtail, Stekoa, would rather chase rabbits than squirrels—we'll be back at it soon—but it never hurts to propitiate the animal spirits anyway.

If there's a unifying theme to any of this, it's just that autumn is here, and I'm grateful.

[Pictured: Pendleton blanket based on a Cherokee basket. We'll need a basket at the orchard, right? And the colours are just right for the harvest theme.] 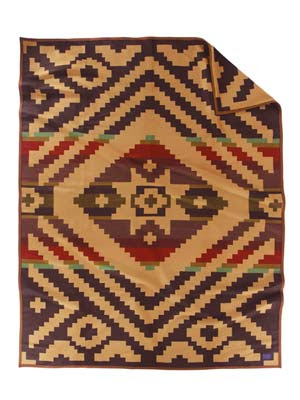 Posted by Mark Churchill at 7:59 PM No comments:

Henry Chappell at Home Range has written an excellent article for Orion magazine on an attempt at conciliation between Texans and the Comanche Nation.

The time for apology has long passed. The men guilty of planning and executing the ethnic cleansing of the Southern Plains are many generations gone. Though their descendants still enjoy the economic benefits of their ruthlessness, apologies seem hollow without amends, and what amends can be made for the near destruction of a culture?

RTWT. And may the spirits look kindly on everyone involved, especially the educators at Comanche Nation College and Texas Tech University.
Posted by Mark Churchill at 11:16 AM 1 comment:

As long as we're talking about conservation, today's Pearls Before Swine nails one of the bigger issues:

Pearls creator Stephan Pastis has the predator mindset down pat in this strip—just ask any falconer about bagged game, live-lures, or hawk-trapping:

And finally, one for Christy and other fans of the Athens music scene: 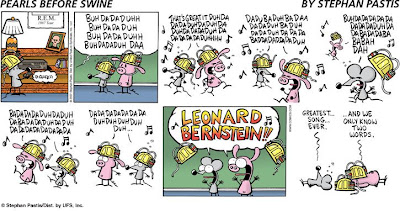 If your newspaper doesn't carry this strip, write a letter and beg them.
Posted by Mark Churchill at 7:16 PM 5 comments: