Trouble sleeping tonight, so my thoughts turned to owls, and I decided to reprise a photo essay from the Nebraska hawking journal. [Photos by me and the family.]

In late May and early June of 2005, a pair of eastern screech-owls (Otus asio) with their four recently-fledged young took up residence in our front yard—an excellent opportunity for photography and study. 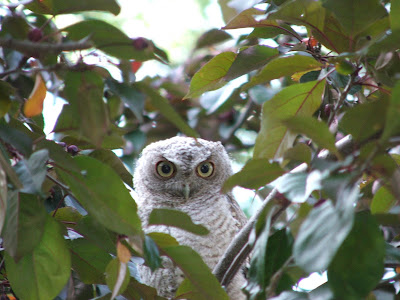 ↓ Adult female with a mouse. Screech-owl diets vary with season and location. A Michigan population studied by John and Frank Craighead preyed heavily on mice, at least in the winter, but Baylor University researcher Frederick Gehlbach (The Eastern Screech Owl: Life History, Ecology, and Behavior in the Suburbs and Countryside) indicates that owls in his Texas study area relied primarily on birds. 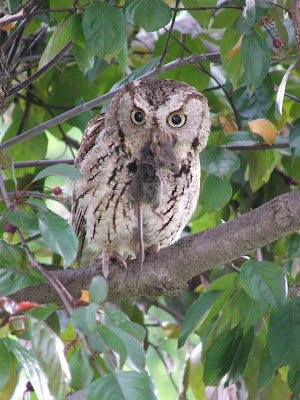 ↓ The adult female (center) feeds one of the fledglings (upper left) while another (lower right) waits its turn. The adult male does the majority of the hunting, but his mate always feeds the young. According to Gehlbach, these roles are so stereotyped that if the female is lost before the nestlings are capable of tearing their own food, they may starve in the midst of abundant but whole prey delivered by the male. 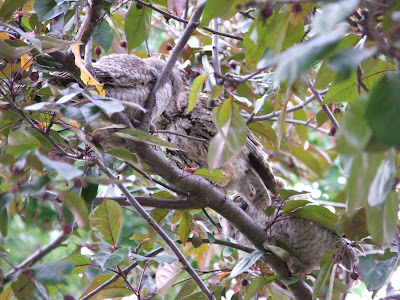 To my innocent eyes the only thing that falcons, owls, and parrots have in common is their oddly anthropomorphic habit of holding their food up to their mouths in one foot as they nibble.

—Stephen Bodio, A Rage for Falcons 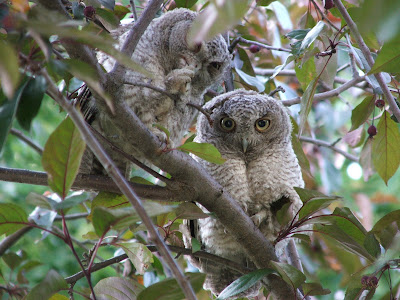 ↓ A study in camouflage: the grey color and tree-bark pattern of adult screech-owls help them remain hidden from predators and prey alike. Eastern screech-owls come in two basic color forms, rufous (red) and grey. Red is dominant to grey in terms of Mendelian genetics, but red screech-owls outnumber grey ones only in humid eastern forests. Grey makes for better camouflage in drier habitats, and for some reason red screech-owls are apparently less hardy in cold weather. Unsurprisingly, then, almost all screech-owls in Nebraska are grey. 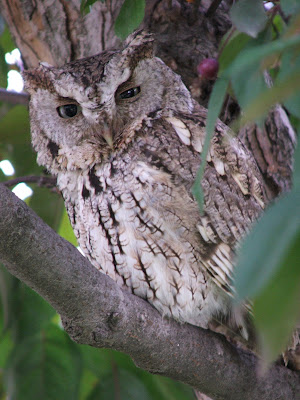 ↓ Screech-owls do well in suburban environments, partly because suburban owls have fewer predators and competitors to contend with than their rural counterparts. To survive to adulthood, though, these young screech-owls will have to avoid housecats, dogs, and cars—many screech-owls are struck and killed while catching worms on city streets during periods of rainy weather. Secondary poisoning is another threat. 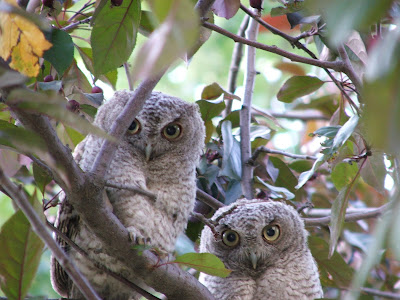 ↓ Once acclimated to human activity, screech-owls can become very confiding. The adults would take mice mere feet in front of us, in broad daylight. (The pressure of extra mouths to feed was undoubtedly a factor—outside of the breeding season, screech-owls are more strictly nocturnal.) They were frequently mobbed by robins but paid little attention. Gehlbach reports, incidentally, that the species most likely to mob screech-owls are those which figure most prominently on their menu. [Paper here.] 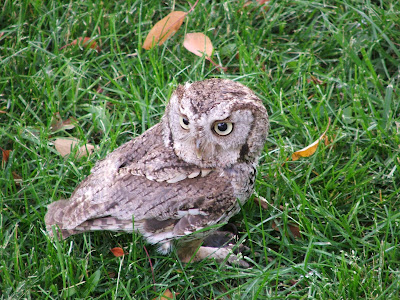 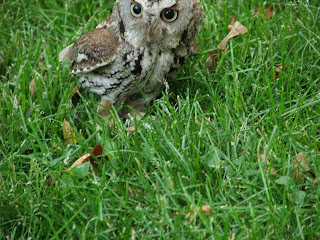 ↓ Adult screech-owl on a favorite perch: shaded and half-hidden, with a good view of the surrounding ground—perfect for napping and hunting. 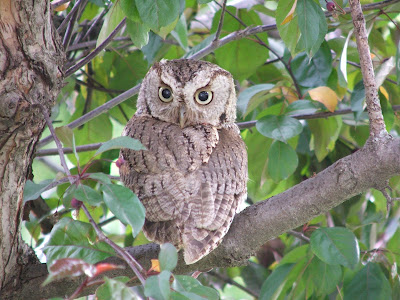 On the off chance that there's anyone reading Flyover Country who doesn't also read Terrierman's Daily Dose, please read this post at least.

Thank you.
Posted by Mark Churchill at 11:08 AM No comments:

Below is the essence of a previous post in visual form, courtesy of Wordle.net. (Clicking on the image will take you to a larger, more legible version.)

This new widget (at least I think it qualifies as a widget) lets you input text, then turns it into a visual representation. Repeated words appear larger, and users have the option of omitting common words like "a", "the", "of", etc. (For the above, I manually deleted all but selected key words.) A variety of fonts, color schemes and layouts are available as well. It's fun, and it's free! I see productivity plummeting as our informal writers' circle starts playing with this...

HT remchick, who sent me (appropriately enough) a Wordle collage of R.E.M. lyrics last night.
Posted by Mark Churchill at 10:59 AM 1 comment:

In a previous post, about 2 1/2 months ago, I wrote about our prairie garden and my lapse of faith in its capacity for renewal. Here's a picture of the front now: 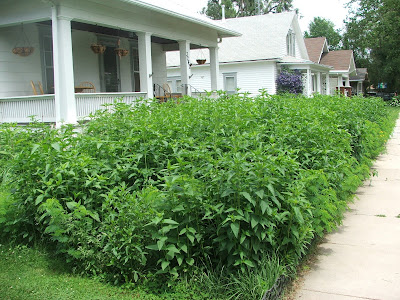 Some of the wildflowers are four to five feet tall, and they may not be done growing. The bulk of what you see here is false (oxeye) sunflower, not yet in bloom. We're now talking about thinning it out to give the other forbs and the grasses a chance to compete.

In fact, the garden is growing so exuberantly that one of our neighbors filed an anonymous complaint with the county weed-control office, which is tasked not only with the control of noxious weeds such as purple loosestrife, tamarisk, and various non-native thistles (we have none of the above) but also with enforcement of Lincoln's 6-inch limit on lawns. Both the complaint and the initial inspection (apparently a hurried drive-by inspection) occurred before anything was in bloom; we were found to be harboring "weeds and worthless vegetation" and ordered to cut same.

I phoned and later e-mailed the superintendent of the weed-control office, who agreed to re-inspect the garden personally. That's been two weeks now, and I've yet to hear back from him, but I know his department is severely overworked. Here's some of what he'll find when he does come out (all of these photos were taken in the last few days): 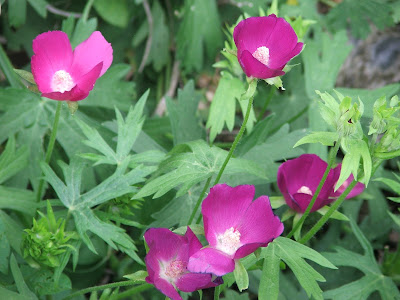 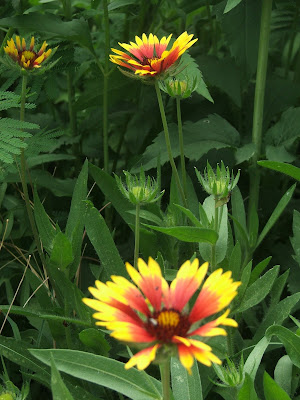 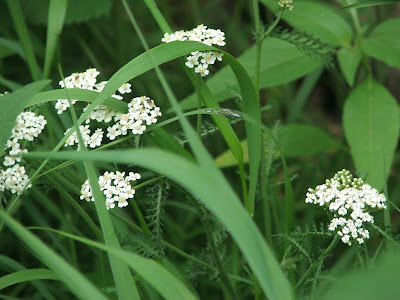 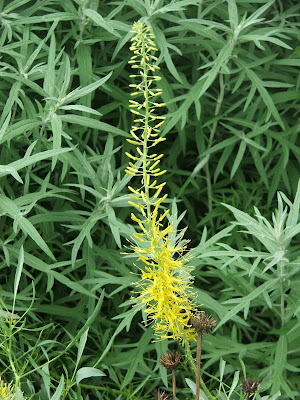 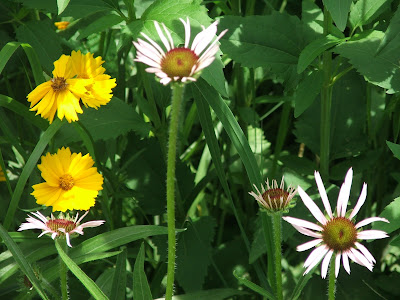 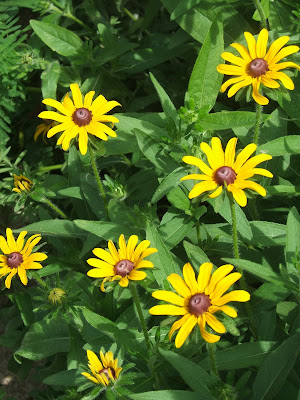 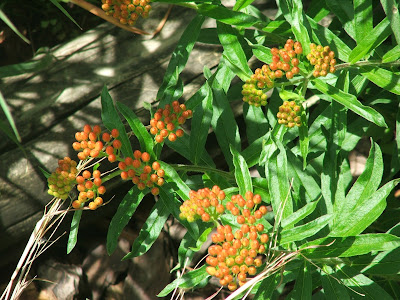 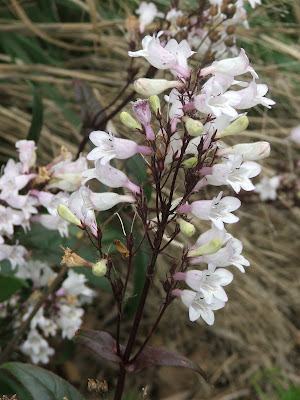 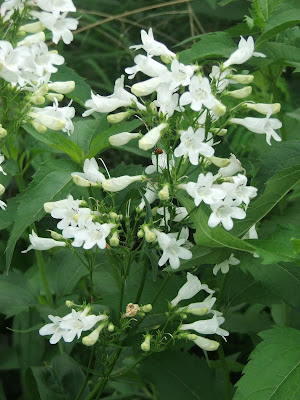 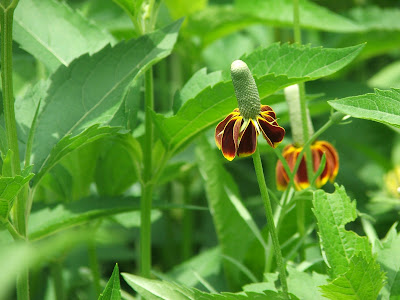 So what do you think? Weedy and worthless?

We've been seeing quite a few plains garter snakes (Thamnophis radix) in our yard and garden lately. This little beauty (in my head, I'm hearing that phrase in Steve Irwin's voice) had just eaten a large earthworm—along with small amphibians, one of the most common prey items for garter snakes. 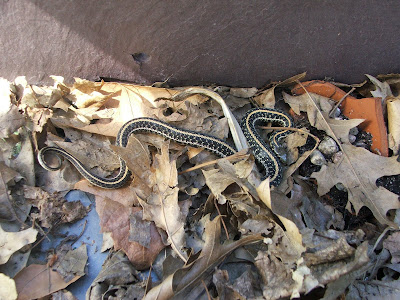 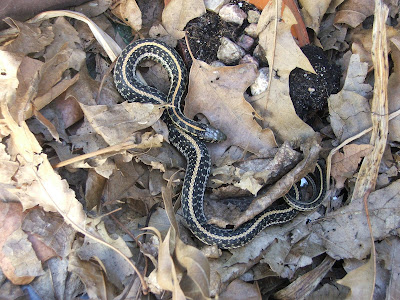 The other local garter snake, the red-sided (T. sirtalis parietalis), I've never found around the house, possibly because we don't have water nearby. Both species can be found in aquatic habitats, but I suspect the red-sided is more water-dependent. If I get out fishing anytime soon, I'll try to photograph a red-sided for comparison.

One of my redtails, Pocomoke, was a confirmed ophidiovore. We hawked rabbits (or attempted to) well into March, but on warm days he vastly preferred to fill up on snakes, especially garters. (I brought Pocomoke to Nebraska from Georgia, and since he was trapped in the aftermath of a hurricane and later moulted into an unusually colorful plumage, I always suspected he might be a Florida redtail, Buteo jamaicensis umbrinus. Sub-tropical origin might have accounted for his taste for serpents.) Anyway, I'm glad that our yard (including the area around the mews) can serve as a refuge for these beautiful reptiles.

This applies pretty well to my hawking 'Ru.

Posted by Mark Churchill at 4:09 PM No comments:

One suit was filed by students who argued that they had, upon admission, been promised an education at an all-female college. The court held by a 5-2 margin that no such contract existed.

The second suit was filed by alumnae and other donors who argued that gifts to RMWC had been intended to support a women's college specifically. This sounds like a stronger argument to me, but the court ruled unanimously that the laws cited by the plaintiffs did not apply to this case.

Why do I care? First of all, I was a member of the last all-male undergraduate class admitted to Washington & Lee University, about an hour away via U.S. Highway 501 over the mountains. I remember hearing the argument, similar to that employed by the Randolph students, that we had been admitted to an all-male school and should be allowed to graduate from one. I don't know, however, if that argument was ever made before a court. In any case, I was content not to be "grandfathered in"—W&L's single-sex status wasn't a major factor in my decision to go there instead of Johns Hopkins or Maryland—and things turned out well in the end, as I eventually met my wife at W&L.

Another reason for my interest is that I have a number of friends from RMWC, mostly of the long-lost variety but one of whom qualifies as a lifelong friend. (In fact, I heard from her this morning after a long hiatus. I don't know yet if this was coincidence or if her thoughts turned to me because of the news, but I suppose I'll find out soon.) I suspect most of them would have preferred, for nostalgic reasons at least, that RMWC stayed RMWC.

I do think there are reasonable arguments to be made for the option of single-sex education, at private institutions anyway, and I'm mildly disappointed that this option was closed due to financial considerations at Randy Mac. On the bright side, my RMWC sweatshirt (if I can find it again) is now a collector's item...
Posted by Mark Churchill at 3:23 PM 2 comments: