Andrew Wyeth: Ripples on a pond

When I heard that the artist Andrew Wyeth (see official website, Wikipedia biography) had passed away on Friday at the age of 91, it was not unlike hearing that a distant relative had died: my Uncle David has always considered Wyeth a major artistic influence. Just as a stone tossed to water causes ripples that radiate long after the stone's disappearance, Andrew Wyeth's work continues to affect David's painting and my own artistic sensibilities, and likely will for some time.

Like Wyeth, David is considered a "regionalist" painter, depicting rural scenes mostly in Maryland and Pennsylvania. Also like Wyeth, David works in watercolour and egg tempera. (I personally prefer his watercolours, with their more subdued tones.) He's had numerous shows and exhibitions, but I suspect his favorite was the one in Andrew Wyeth's hometown of Chadds Ford, Pennsylvania.

Here are a few snapshots of David's work from my dad's collection, though I suppose one day I will have to start thinking of it as my collection. (These small photos don't begin to do justice to the paintings, but will have to suffice.) 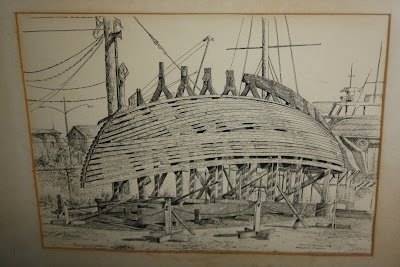 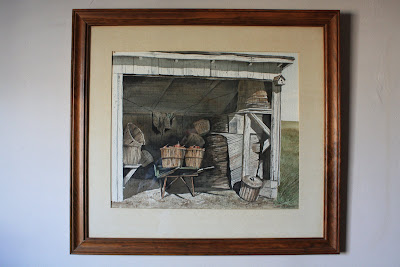 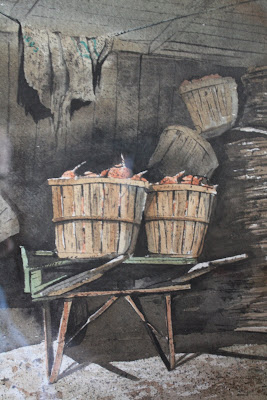 One way in which David's work differs from Andrew Wyeth's is that while David's landscapes almost always include man-made elements (houses, barns, etc.), the human form rarely if ever makes a direct appearance. Some critics, I assume, would draw psychological conclusions about this aspect of David's art, but I also suspect that most of those conclusions would be completely off-base. My uncle, like most in the family, could hardly be classified as an extrovert, but a gentler, more personable man you're not likely to meet. 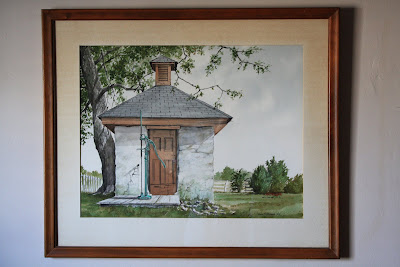 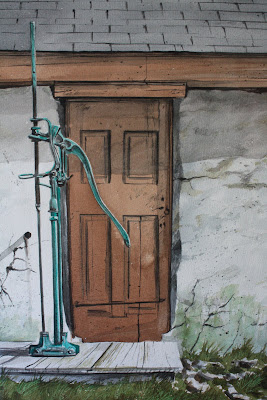 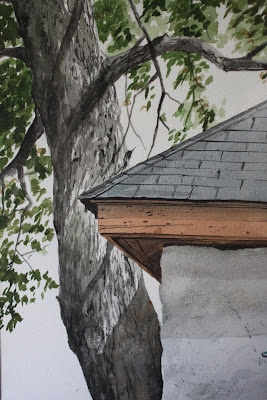 I have always admired, perhaps because it comes with great difficulty for me, the way artists like David can suggest detail that isn't necessarily there, as for example in the leaves and textured bark of the tree behind and to the left of the pump house. Robert Bateman, another artist both David and I admire, is a master of this. 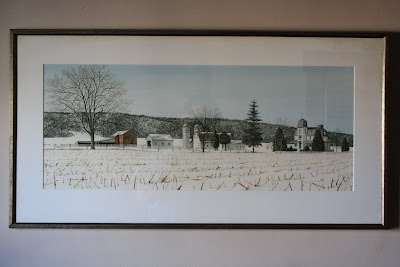 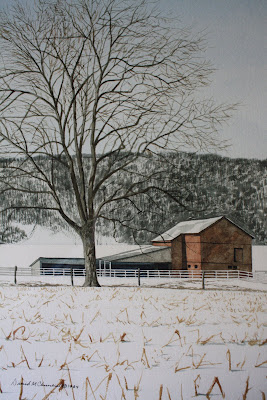 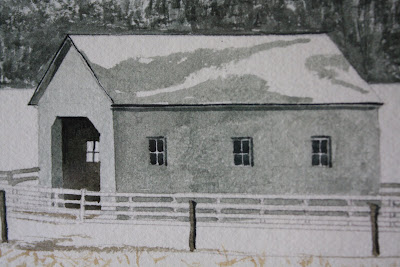 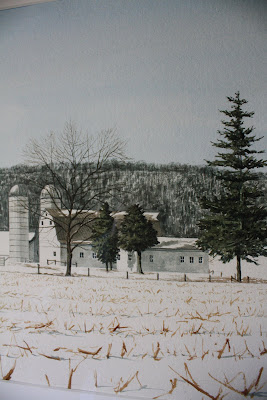 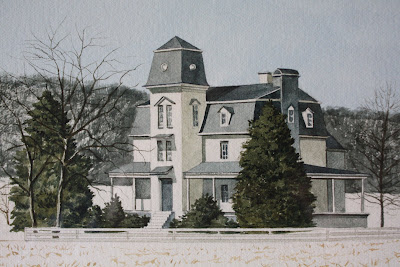 Watercolour is a difficult medium for a number of reasons, but one has to do with its transparency. Unlike with oils or acrylics, for example, there is no white paint. White comes from the paper itself, so the white areas in a painting like this (the snow, the fences, the sunlit sides of the house) are not painted but painted around. The unforgiving nature of the medium therefore requires a good deal of planning as well as meticulous technique; David typically "scouts" a painting with several visits to explore various points of view and study the changing of the light, but paints at home using photographs for reference. He does not consider himself bound by the physical realities of a location, however, often rearranging various elements for artistic effect.

On my last visit home in November, with the painting itself in the back seat of the Outback and a Maryland highway map pointing me toward Burkittsville, I set out to locate this scene. It wasn't difficult to find: Needwood Farms, established circa 1795, is located perhaps a mile outside the town of Burkittsville, right off Highway 17. Once there, I could see that David had flattened out the field in the foreground; from the point of view he used, the house is actually half-hidden behind a rise in the field. (Also, as you can see in the photo below, the evergreens around the house have grown much bigger since '84.) 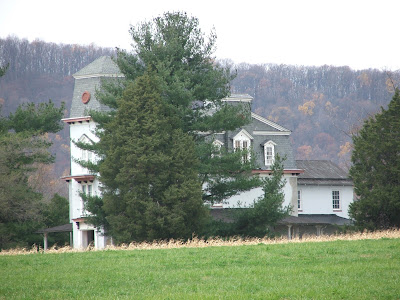 The ridge behind the farm is the low backbone of South Mountain, where on September 14, 1862 Major General George B. McClellan's Union troops attacked General Robert E. Lee's scattered Confederate forces, which ten days earlier had advanced into Maryland for the first time. McClellan took the three gaps held by the Confederates, achieving a significant Union victory at this stage of the war, but failed to press his advantage. The Battle of South Mountain was consigned to obscurity through McClellan's delay, which gave Lee time to gather his army near Sharpsburg, on the west bank of Antietam Creek. The ensuing battle there, on September 17, marked the single bloodiest day of the American Civil War.

David's personal website (like the gallery site here) is definitely worth checking out despite being a bit out of date, which is a reflection of the fact that health issues threatened to put an end to his painting career. Happily, he has made a remarkable recovery from what can be an utterly debilitating condition, and is painting once again. I hope to be able to post more later. Meanwhile, condolences from our family to Andrew Wyeth's. His was a remarkable talent.

...with circles and arrows and a paragraph on the back of each one explaining what each one was, to be used as evidence against us.

Well, not really, but these were taken by a cop. 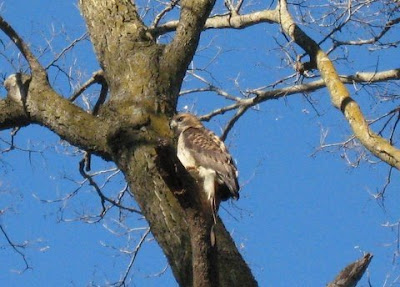 Conservation officer Dina Barta from the Nebraska Game & Parks Commission did my facilities re-inspection (part of the falconry permitting process) when I moved a couple of years ago, and expressed an interest in coming afield with me. A few months ago we bumped into each other while we were both stocking up on dog supplies, and traded contact info. Yesterday, we finally got around to hawking together.

Dina and her friend Keith met me at a State Recreation Area that holds a good population of cottontails as well as fox squirrels, a species I enjoy hunting but for which Stekoa harbors less enthusiasm. Temperatures were in the single digits, but bundled up against the cold, we ventured into the woods along with Maxine and Anya. Almost immediately, Stekoa changed direction, going at right angles to our intended route—a good indication of game on the move. Sure enough, when we caught up to him, a rabbit flushed from the undergrowth and was immediately taken. Total elapsed time: about three minutes. 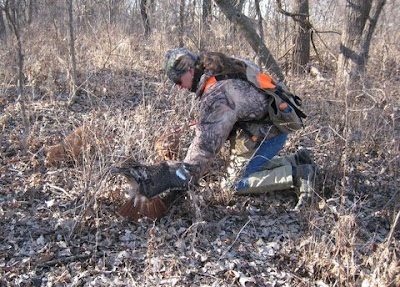 I rarely try for more than one rabbit in a day, but all the conditions were right: a quick first kill, company along (they had planned on seeing more flying than this), and an absence of pressing responsibilities elsewhere. So I rewarded Stekoa lightly, put the rabbit in my vest, and we set out again. 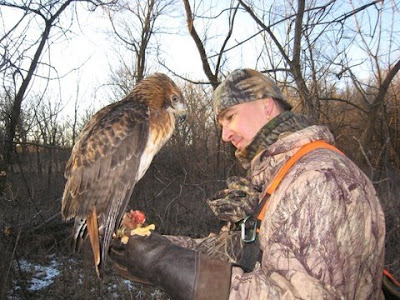 Weather like this often drives cottontails underground, so I was not at all surprised that flushes thereafter were few and far between. Dina and Keith didn't seem to mind at all; they were clearly enamored of the hawk (Dina noted that "If redtails were rare, everyone would agree they're the most beautiful bird alive") and also impressed with the way Max and Anya worked cover. I have to admit I was impressed with the dogs, too, unfazed as they were by the cold. They also showed off their athleticism—at one point we ventured into unfamiliar territory, and I was surprised to arrive at the edge of a bluff overlooking the creek. Forty or fifty feet down, with a path (made by what, I wonder?) going straight down an incline of at least 60 degrees. But Stekoa was flying ahead of us and Maxine, intent on her mission of staying with the hawk, barrelled straight down, crossed the frozen creek like nothing extraordinary had happened, and continued hunting. The less-confident Anya followed her before, I think, she knew what she'd gotten herself into, and got stuck three-quarters of the way down. I tried to "ski" down sideways, leaning hard into the hill, but traversed the lower half of the hill on the seat of my brush jeans—where there isn't a layer of tough Cordura nylon. (Fortunately, Dina didn't capture this episode with her camera.) Anya then scrambled back up the steep slope and followed Dina and Keith around to an easier crossing.

[The dogs investigate the site of a "wild" rabbit kill. The predator could have been any of several: hawk, owl, fox, coyote, or bobcat. I had to stash the frozen gutpile on a nearby branch to keep Max and Anya from chowing down.] 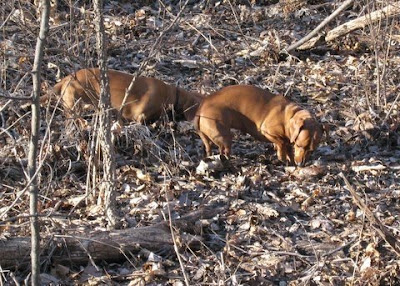 We ended up hunting for about two hours before Stekoa got another shot at a rabbit. This was an unusual flight, not especially exciting from a visual standpoint but tactically interesting: He glided most of the way, easing up, over, and around the flank of a small stand of sumacs to take a cottontail hiding in the grass on the far edge. Until Stekoa pitched down and the rabbit started squealing, I hadn't thought it was a hunting flight at all, just a routine glide to a new perch, and I wonder if the bunny was likewise lulled into a false sense of security by the casual approach. In any case, the rabbit was put in the bag, and we were done for the afternoon.

[Stekoa eats while Anya looks on. The dogs got rewarded, too: rabbit legs with a bit of meat left on, what falconers call a "tyring".] 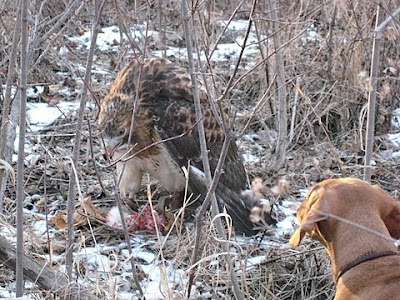 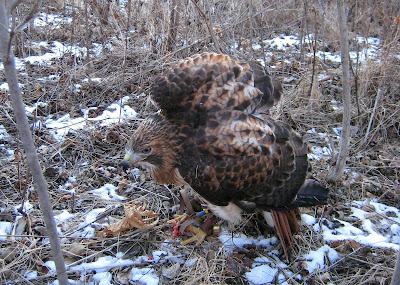 On our way out of the woods, we encountered a deer hunter just entering—it was the last day of the firearms season. Dina checked his permit, and even though Keith and I hung back we could hear the man spoke with a pronounced accent. Dina later told us that all the deer hunters she'd checked lately had been Russians—apparently they're the only ones hardy enough to sit still for hours in this late-season weather. We at least got to walk around, climbing in and out of the creekbed, keeping ourselves warm through exertion.

[I like this shot; you can almost tell by looking how the sun offers light but little warmth on a day like this.] 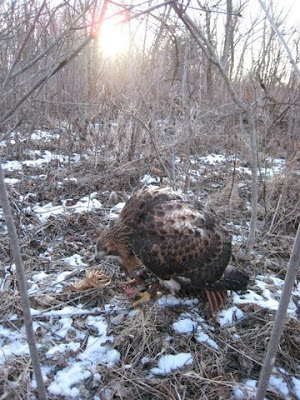 All in all, another good day. Stekoa certainly enjoyed himself—just don't get too close with that camera! 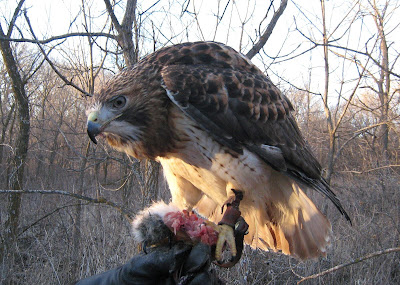 That kind of day.

Journal Star outdoors writer Joe Duggan had a nice column in yesterday's paper (link here) about a sharp-shinned hawk at his house. Coincidentally, just a few hours after I read the article, Julie T. called to tell me about a hawk (it turned out to be a Cooper's hawk) she had seen perched in a bush in her front yard. "The sparrows were in a state of panic," she said, as indeed they would be with an accipiter in the neighborhood.

All of which got me thinking (again) how fortunate we are to have such a plethora of urban wildlife here in Lincoln. The last few mornings, in between irritated slaps at the snooze button, I've been hearing a pair of great-horned owls in the trees behind the house. Karl Linderholm recently sent me this picture, probably taken by Mitchell, of a screech-owl at their back deck. 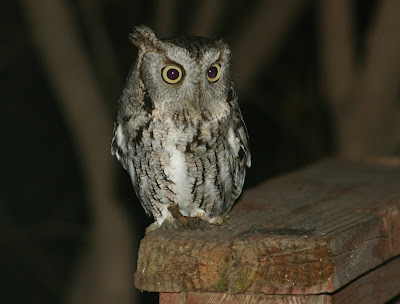 Then, of course, there are the redtails (one of whom I occasionally find perched on the fence just outside Stekoa's mews, prompting me to wonder what sort of communication might be transpiring between these normally asocial birds), merlins (easier to find in town, where they enjoy a concentration of European starlings, than out in the boonies), and the Capitol peregrines (previous posts here and here). City living definitely has its ups and downs, but seeing all these raptors on at least a semi-regular basis certainly helps to make it tolerable for me.
Posted by Mark Churchill at 1:00 PM No comments: