An assortment of dragonflies, all from Douglas and Sarpy Counties, most by Jessa. [UPDATED with new photos 7 August.]

Halloween pennant. The new dragonfly in town? According to the University of Nebraska State Museum, "it is perhaps a recent invader, since there are no records prior to the 1990s except for a large number collected in Cass County in 1914." 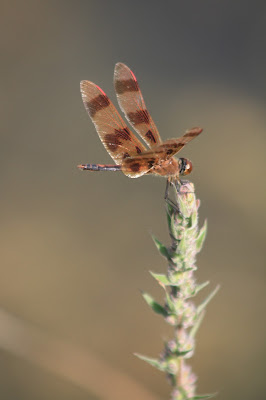 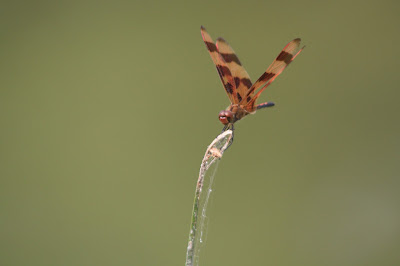 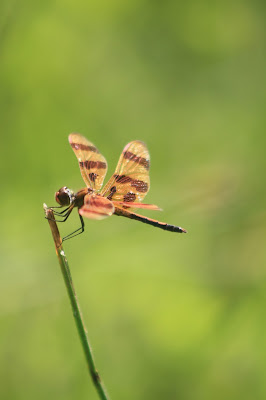 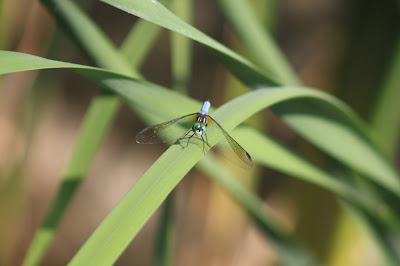 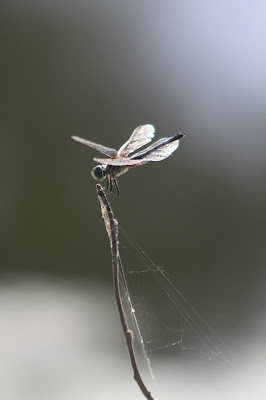 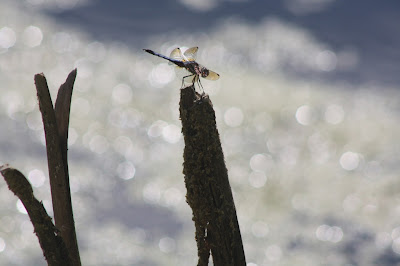 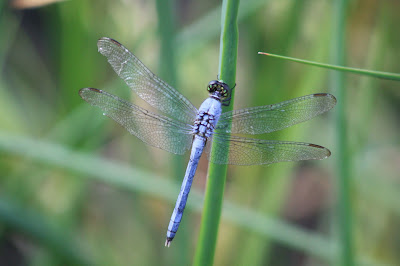 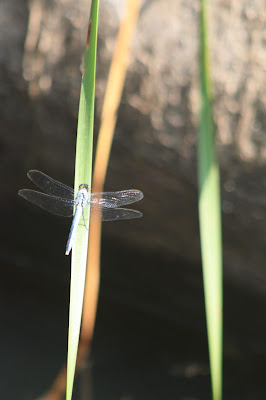 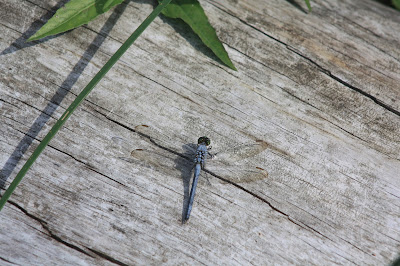 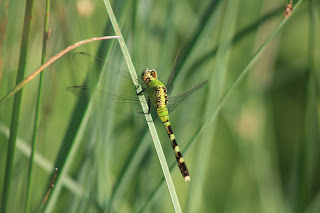 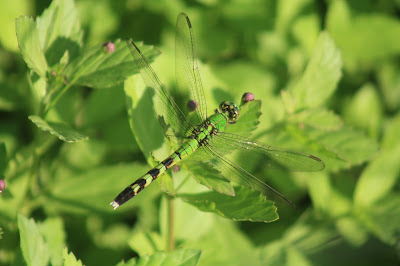 Pondhawk male and female together. Very much so. This, the second phase of mating, is known as the "wheel position". 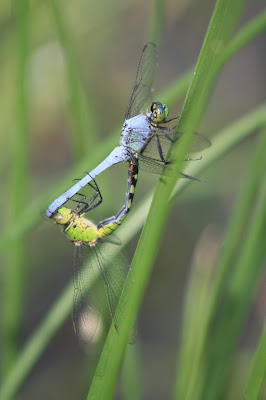 Eastern amberwing. Not just small in the photo; they're small in real life as well. 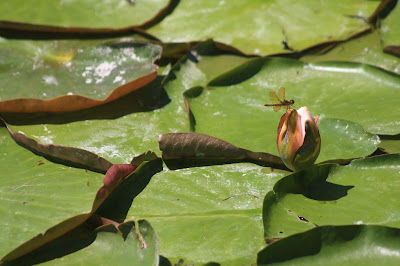 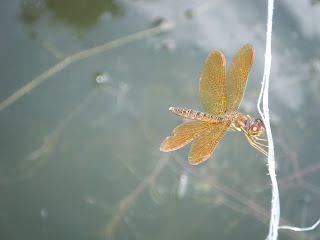 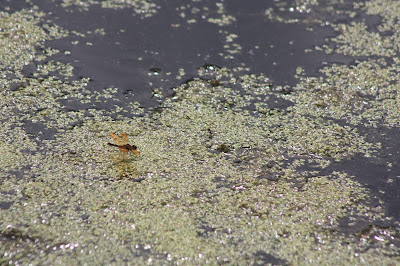 Widow skimmer, eating a ladybird beetle in the first shot. 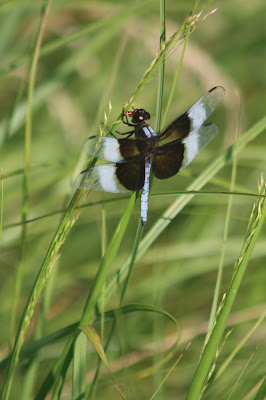 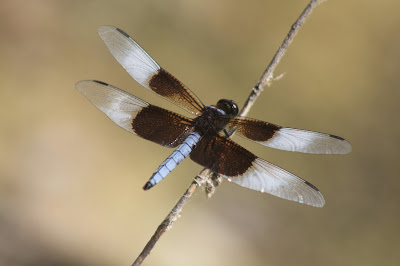 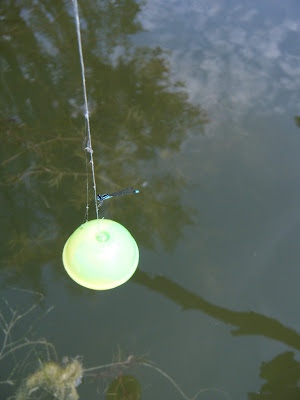 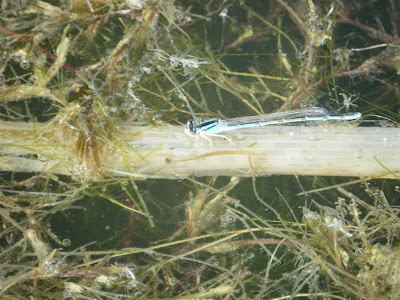 Posted by Mark Farrell-Churchill at 11:03 PM No comments:

In 1880, a third-year medical student at the University of Edinburgh accepted a position as ship's surgeon and captain's companion on the whaling vessel Hope out of Peterhead, Scotland. Like many such adventurers, he kept a journal of his travels; this particular journalist was to become better known as a writer than as a physician. His name was Arthur Conan Doyle.

Doyle scholars Jon Lellenberg and Daniel Stashower (both, I believe, acquaintances of my dad, "Corot") edited and annotated Conan Doyle's journal as 'Dangerous Work': Diary of an Arctic Adventure, published by the University of Chicago Press in 2012. Unsurprisingly, it's a good read; Doyle's turns of phrase, sense of humour, and essential compassion for humanity will be recognizeable to anyone familiar with the Sherlock Holmes stories.

'Dangerous Work' appealed to me both as a Holmesian and as someone with an interest in Arctic wildlife. So I was particularly intrigued by the entry for 16 April:

Jack Buchan shot a hawk in the evening which the Captain with his eagle eye discerned upon a hummock, and detected even at that great distance to be a hawk. About 18 inches high with beautifully speckled plumage.


The use of "speckled plumage" would seem to indicate that this was a white gyr. Consider this entry from 18 March, about a month earlier: "Captain saw a large speckled owl a couple of hundred yards from the ship, saw a few roaches [dovekies, Alle alle] and guillemots but we are too far from land to have many. We are considerably to the North of Jan Mayen now." Clearly at this latitude, what the captain reported was a snowy owl; if both the owl and the "hawk" were speckled, we might assume both shared black markings on a white background.

Later in the journal, however, Conan Doyle includes on a "Zoological List of Whaling Voyage" an "Iceland hawk (Falco Icelandicus)". At that time, taxonomists recognized several species of gyr, corresponding to what we now denote "colour morphs", and the Icelandic falcon was grey on the back and white underneath. A white gyr with black markings would be considered a Greenlandic falcon.

[Field guide illustration by Roger Tory Peterson. Peterson would have shunned the old-fashioned terminology, but the central bird represents the "Icelandic" type, and the right-hand bird the "Greenlandic".] 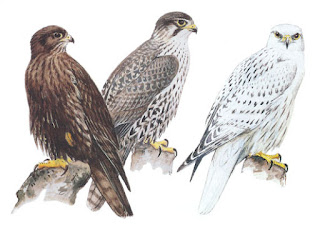 So, was Doyle's gyr white or grey? The young medical student turned whaler was not an ornithologist, and made no claim to be one, so it could be a mistake to rely too heavily on his identification of the bird as an "Iceland hawk" specifically. His drawing ("my idea of a hawk—had the Smallpox in its youth") makes no distinction between the back and underneath, showing instead a uniform spotting all over—but again, while some of his sketches are quite good, he had no pretentions of being an artist, either. The question could be easily settled if the collected specimen could be tracked down, but if I'm honest, I'm far too lazy a researcher to make the effort even if I knew for a fact that the specimen still existed.

[Conan Doyle's sketch, along with one by Captain John Gray.] 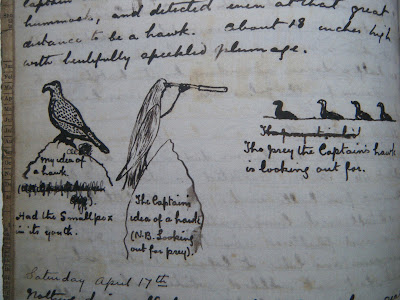 What is beyond question is that Conan Doyle's observation of a gyr perched on an ice floe far from land is consistent with a "discovery" made over a century later by Kurt Burnham of the High Arctic Institute, indicating that some gyrs actually spend a good portion of the year out at sea. As Doyle's most famous creation, Sherlock Holmes, proclaims in The Hound of the Baskervilles, "The world is full of obvious things which nobody by any chance ever observes."

Posted by Mark Farrell-Churchill at 12:37 PM No comments: 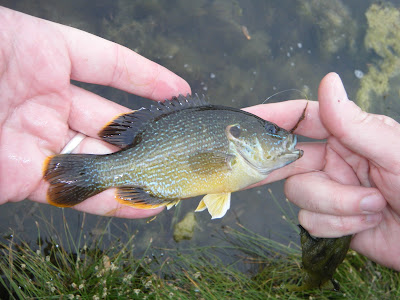 Some anglers deride them as "bycatch" or "bait thieves", but when you're fly-fishing for beauty, it's hard to beat Lepomis cyanellus. (We like their aggression as well—few fish really attack a fly like a greenie.) 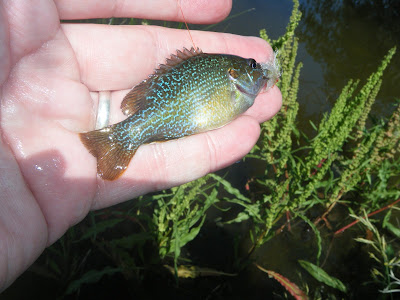 Posted by Mark Farrell-Churchill at 7:17 PM No comments:

M: "...Of course, Whedon's soliloquies do tend to be shorter."

J: "Well, you know what they say about brevity..."

Posted by Mark Farrell-Churchill at 12:21 PM No comments:

I think what Haldane meant to say was "a perfectly understandable fondness for beetles". 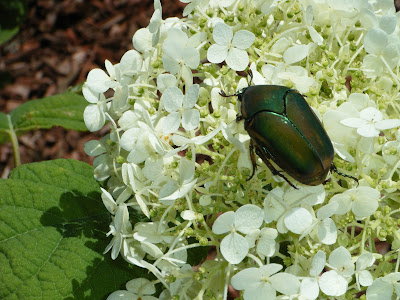 This iridescent scarab beetle was rescued from a pissoir and released in more congenial surroundings.

Posted by Mark Farrell-Churchill at 2:05 PM No comments:

Long story short: We went away for Father's Day weekend, camping and fishing on Verdigre Creek, and returned to find the mews empty. Evidence left behind suggested that kids had broken into the mews, poked at Stekoa with broomsticks, and thrown flowerpots at him until he finally fled. (Not the only vandalism done, but by far the most serious.) This was devastating on multiple levels: he's the best rabbit hawk I've ever flown, Jessica is at least as attached to him as I am, and I don't know whether my circumstances this autumn will allow for trapping and training a new hawk. But by far the worst part was not knowing whether he had escaped his tormentors unscathed.

I was sure I'd never see him again, but last Tuesday evening Elaine Bachel from Raptor Recovery got word that a hawk wearing bells had been seen at a city park. She contacted Amanda Kaufman, my friend and former apprentice, now a general falconer and working for Animal Control. Amanda stopped by the house, gathered up Jess, and went to the park, where they maintained a vigil until I arrived from work. By that time, Stekoa was settled into a pine tree for the night, but Jess and Amanda assured me he was flying well, and that he had been on the ground eating at the time of the original sighting.


Dawn the next morning found me at the park, just a couple of miles from home, ready to call Stekoa down for a large feeding of rabbit. He showed some indications of interest—small intention movements and the like—but my hopes for a quick recovery were disappointed. Not too surprising, considering he was last flown nearly four months ago, not particularly hungry, and most likely a bit traumatized by his recent experience. After a few hours of constant mobbing by angry songbirds, he left the park and flew into a residential neighbourhood, where of course I was bound to feel much more conspicuous.

I knew this in a vague, academic sense, but a red-tailed hawk's capacity for doing nothing is quite impressive. After twelve hours of mostly doing nothing while I fretted and fidgeted below, Stekoa finally came down to the fist and we went home.

Stekoa's been staying inside, and will at least until the fireworks have ended and security around the mews has been beefed up. The little bastards who broke in have not been found, and will likely never face any consequences for this particular crime, but I'm confident they'll end up in prison for something else years from now...