Credit where credit is due: Cooper's hawk tactics

The daring exploits of this Hawk, which have taken place in my presence, are very numerous, and I shall relate one or two of them.
—John James Audubon, The Birds of America

Driving along Cornhusker Highway last week, I saw a red-tailed hawk rowing its way across an industrial park—then did a double-take when I noticed the long tail. Not a redtail then, but a Cooper's hawk doing a dead-on impression of a redtail's casual, point-A-to-point-B flight. The hawk slowly flew toward a utility pole, on which several pigeons perched. Just like a redtail, it dipped slightly as it approached the pole, then pitched up for a landing. At this point, of course, the pigeons are going to abandon the pole even for a redtail. The Cooper's knew this—was counting on it—for as soon as the pigeons flushed, she twisted into a stoop, stepped up her wingbeat, and disappeared behind a warehouse, hot on the tail of one of the fleeing pigeons.
Many birdwatchers, and more than a few falconers, think of accipiters as rather mindless, purely reactive predators: See, chase, kill, eat. Sleep. Repeat. And perhaps it is true that accipiters are less cerebral than falcons or buteos, but close observation shows that ambush is not the only option—that there is more to a Cooper's hawk, for instance, than just hair-trigger reflexes and cheetah-like acceleration.
[Urban Cooper's hawk. Photo by Pat Stull.] 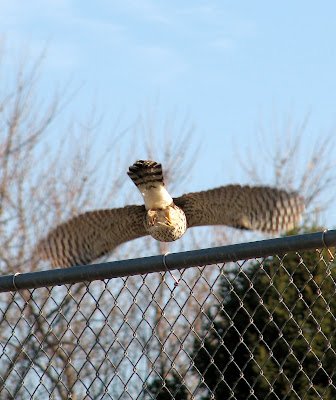 In his book The Cooper's Hawk: A Cross Timbers Chronicle, Kansas falconer/naturalist Vic McLeran offers several examples of accipitrine tactics that demonstrate a deliberate approach to predation. Among them is another example of mimicry: a Cooper's that imitates the tilting, meandering flight of a northern harrier to approach, by stages, a flock of prairie chickens. Other creative Cooper's hawks in the book use coyotes or human hunters as beaters, or flush birds themselves by crashing repeatedly into impenetrable cover until the sparrows within lose their nerve and flee their stronghold. Another flies directly away from a flock of starlings, then drops low and uses the terrain to mask a flanking maneuver, circling around to take one of the starlings with a quick dash from an unexpected direction. (A trained hawk in this instance, but no one trained her to do that.)
Obviously there must be a first time for everything, but when a human happens to witness such an unconventional approach—a trick play, as it were—it's safe to assume that the hawk has successfully employed that same tactic before. But, for a mimic like the Cornhusker Highway bird, not too often: for a trick play to work, it has to be unexpected. This hawk must have played flocks of pigeons for fools, probably on a recurring basis, but not the same flock, or the redtail gambit wouldn't work. So not just creativity, then, but discretion. Intelligence. 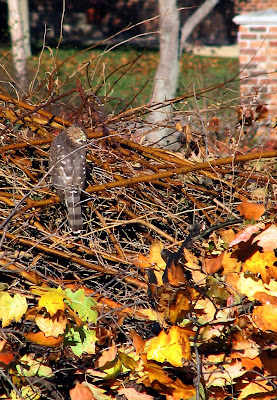 Several years ago, when I was flying a passage sharpshin, I was granted access to a good field in the southern part of the county, land covered by a conservation easement. Long and narrow, it was flanked on each side by a windbreak of trees. The field itself was planted in a mix of grasses and forbs, with stands of tall sunflowers that sometimes held a covey of quail—the reason for our visits. Also present were a flock of pheasants that made use of the field, feeding among the forbs and resting in the phragmites that grew in the lower, wetter spots, and a big female Cooper's hawk that hunted them. We saw her regularly, and every time we did see her, she was hunting the pheasants, and so I assume that she must have been successful or surely she would have given up long before: a pheasant is a tough bird, far from an easy kill even for such a large Cooper's.

Occasionally I'd see her perched on a branch way down the treeline, but she usually made her appearance in typical spooky Cooper's hawk fashion, materializing as if from nowhere, weaving her way through the trees of the windbreak with the accipitrine flap-flap-glide. As she came level with the pheasants, she'd veer suddenly toward them, putting them to flight. I was struck by the predictability of her attack, wondering how it could possibly remain effective...until I saw her do it differently. On that occasion, she again came flying down the treeline, not flap-flap-gliding in search mode but pelting through the trees in headlong pursuit of a bird—except there was no bird in front of her. The appearance, though, that she was otherwise occupied froze the pheasants in place for an extra second or two...a fatal mistake for a late-rising hen.

One of the limitations of falconry is that our hawks tend to be constrained, flown in the ways we think to fly them, and plying their trade at best a few hours a day. Little wonder then that wild hawks can show us things we might not have imagined, things that surprise us. Cooper's hawks may hold more surprises that most, owing to their aversion to close observation. It can take hours afield to glimpse mere seconds of an accipiter's day. It's easy to respect the physical abilities of a Cooper's hawk, but perhaps it's time we paid more attention to their mental abilities.
[Related post (by David Sibley): A hawk in pigeon's clothing]