Speaking of Ellie and eagles...

Shortly after our return from Idaho, she took this shot of an adult bald eagle perched in a small tree not far off a lightly-traveled dirt road. 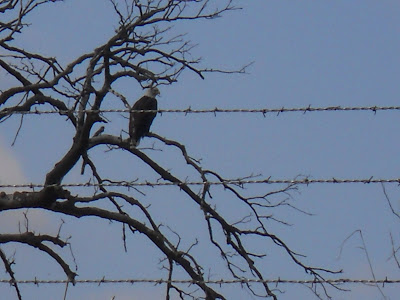 Why here? She zoomed back out for context: 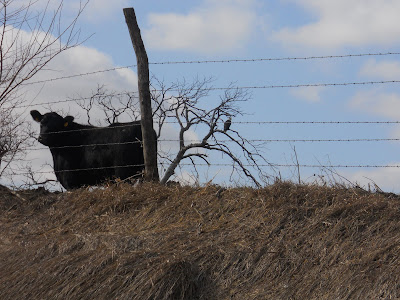 It was calving time—we had already seen several tiny newborns on our drive—and the eagle was doubtless hoping for (or may have already found) a stillborn calf. Of course, some ranchers seeing an eagle dining on a calf might assume the eagle was the author of the calf's demise rather than merely the beneficiary, so we didn't feel bad at all that the eagle flew off, apparently made nervous by our stopped vehicle. 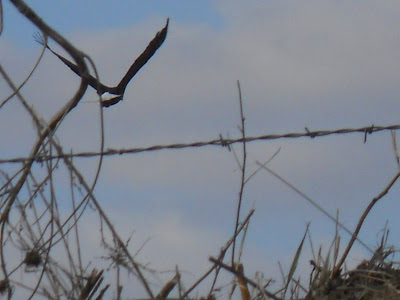 This is a harpy eagle, Harpia harpyja. Harpies, among the the largest raptors in the world, are native to the rainforests of Central and South America, where they hunt monkeys, sloths, and other arboreal mammals. Their stout, powerful feet can exert over 500 pounds per square inch of pressure; their largest talons are roughly the size of grizzly bear claws. They can lift approximately three-quarters of their own body weight and, like many raptors, routinely kill animals many times their own size. 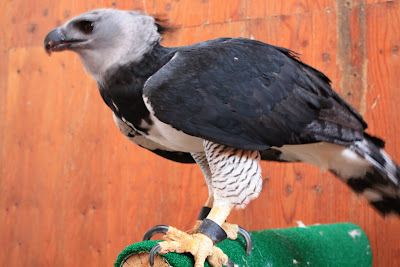 This is a smallish primate (who also happens to be my daughter) tidbitting a harpy eagle. Don't try this at home, kids. 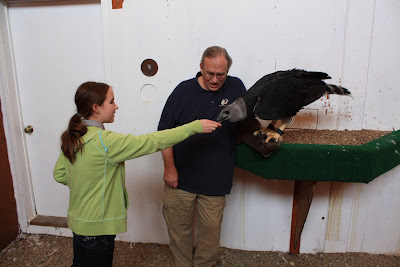 Ellie is under the watchful eye of Peregrine Fund biologist Jim Willmarth, who I first met over a decade ago when I was doing some summer work with the P-Fund in Montana. He kindly gave us a behind-the-scenes look at The Peregrine Fund's World Center for Birds of Prey in Boise.

This eagle, Luigi, is an eight-year old male, raised at a captive-breeding facility in Panama and originally slated to be a breeding bird. Things didn't work out with his intended mate, a particularly aggressive female, and due to his own exceptionally easygoing temperament he became an educational bird—an ambassador for his species, which has been threatened by shooting as well as habitat destruction. [Learn more about The Peregrine Fund's work with harpy eagles here.] Luigi is exceedingly well-manned, playful and very cognizant of his own strength; we watched him gently push Jim's hand aside where another raptor (my redtail Stekoa, for example) might have footed in earnest. Jim also told us of tidbitting Luigi with a piece of liver; Luigi refused to take it, apparently believing Jim to be injured, until Jim showed him by moving it around that it was separate and not a piece of his own flesh. 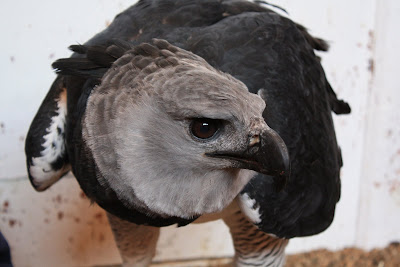 Ellie, always an admirer of raptors, is now positively smitten with harpy eagles, thanks to Jim's generosity and Luigi's approachability. I'm sure there are plenty of Panamanian and Belizean kids who will grow up with an appreciation of harpies thanks to their own early encounters with Luigi. It's easy to become discouraged about environmental education when it's done badly—and trust me, I've seen it done badly—but done right, it just might be the silver bullet.
Posted by Mark Churchill at 6:57 PM 1 comment: 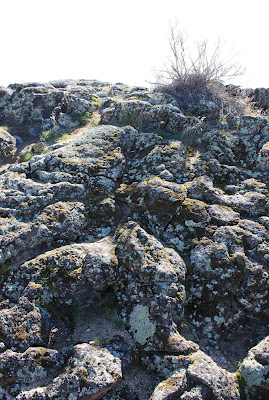 Ellie and I visited the Morley Nelson Snake River Birds of Prey National Conservation Area near Kuna, Idaho—600,000 acres of mostly BLM land encompassing the Snake River gorge and surrounding plateau. This is high-desert country dominated by winterfat, sagebrush, and sparse grasses (along with, unfortunately, introduced Russian thistle or "tumbleweed", Salsola spp.) and supports a large population of Townsend's ground squirrels and black-tailed jackrabbits, which in turn support large numbers of raptors as well as a notable concentration of badgers.

View from the canyon rim. 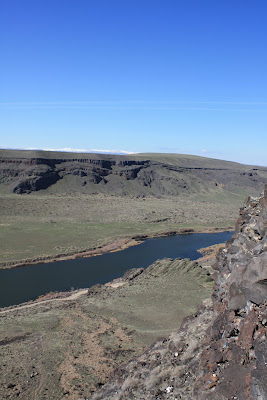 The first step's a doozy. 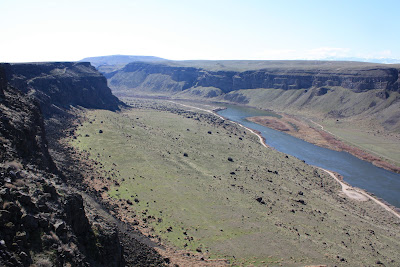 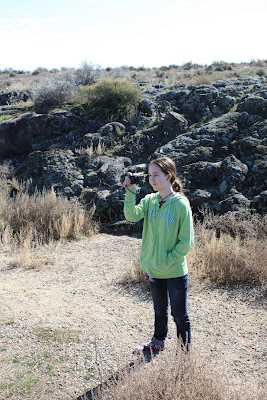 Were I a serious photographer, I could have spent the better part of the day shooting this one sculpted volcanic rock. 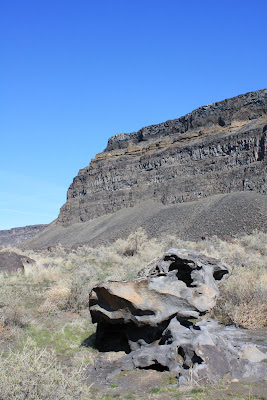 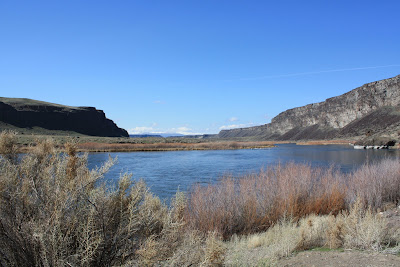 I managed not to get any usable hawk photographs, but we did see red-tailed hawks, ferruginous hawks, golden eagles, American kestrels, and of course several prairie falcons. The largest concentration of nesting prairie falcons is here in the Snake River NCA. (The largest wintering population, incidentally, is in the northern Sandhills around Valentine, Nebraska.) Prairies dine almost exclusively on ground squirrels when they are available, switching to horned larks and other birds at other times of the year. Other notable sightings included a number of ravens and Say's phoebes. And I feel obliged to take note of a population of what, in other circumstances, I would simply call pigeons; in this place, living on cliffs and surrounded by such deadly neighbors, I will accord them their formal name of rock doves.

Here, on or just outside the NCA, is a ferruginous hawk nest: bulkier than a redtail nest, in a mere twig of a tree that redtails would never use. This nest is conveniently located in the middle of a large prairie-dog town—"close to shopping", as a real-estate agent might say. 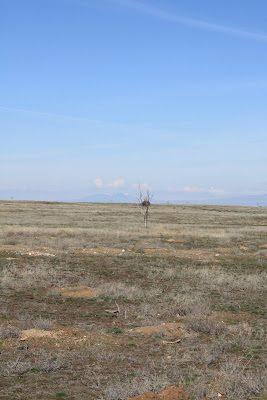 This is Mecca, a pilgrimage that every falconer should make at least once in his or her lifetime. I hope to make it back before too long.
Posted by Mark Churchill at 10:29 AM No comments:

No storyline, just a few snapshots of a big female gyr x peregrine at play. 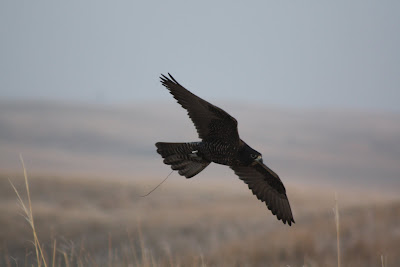 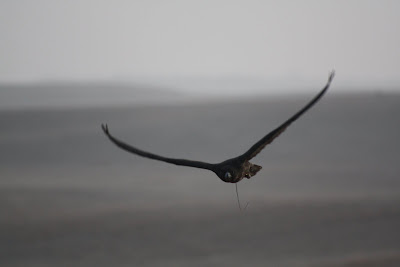 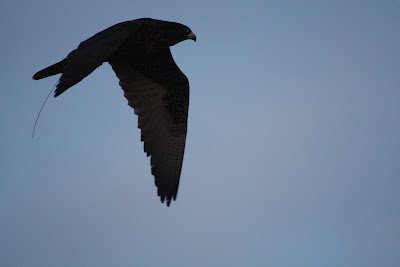 Posted by Mark Churchill at 9:20 PM No comments:

The better to see you with, my deer

The Nebraska Department of Roads (in any other state it would be the Department of Transportation) plans a deer fence along a four-mile stretch of I-80 between Lincoln and Omaha in order to reduce deer-vehicle collisions. Everywhere else, of course, motorists (and deer) will have to take their chances as usual.

Another approach: kill 'em all. (Fortunately, this proposal has been modified extensively following an outcry by deer hunters and others with values that go beyond the purely economic.)

I just want to see the critters. To that end: 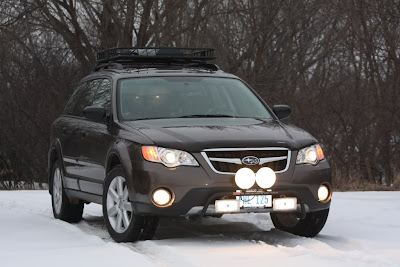 That's a pair of Hella 500 driving lights (packaged as "sport activity lights" for the Subaru Baja) and a pair of Hella 550 fog lights on a Rally Innovations lightbar. When everything's switched on, the road is lit up like Memorial Stadium. (A big thanks to Chris Cook at PTC Factory Outlet, Chase at RI, and Lael Cleland at Lael's Import Performance.)

Posted by Mark Churchill at 8:40 PM No comments: