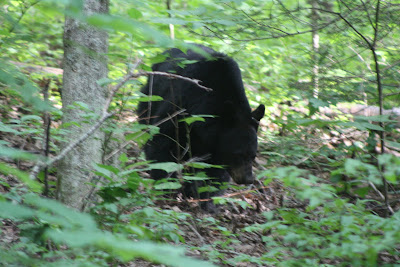 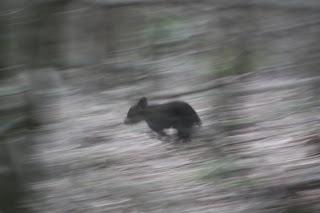 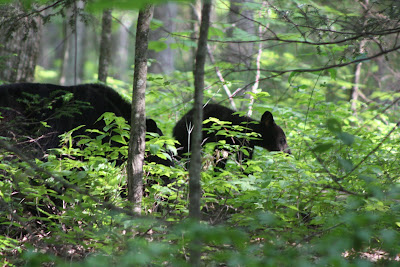 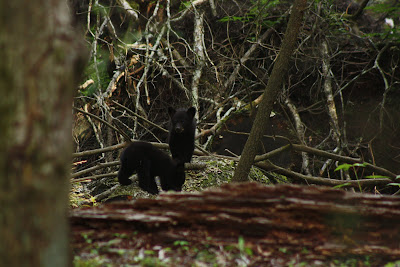 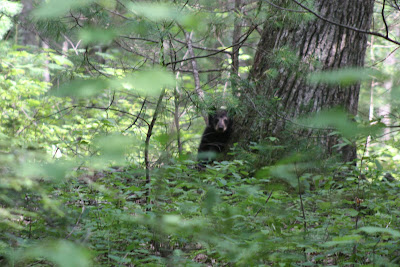 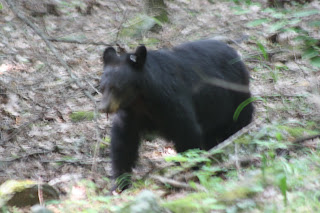 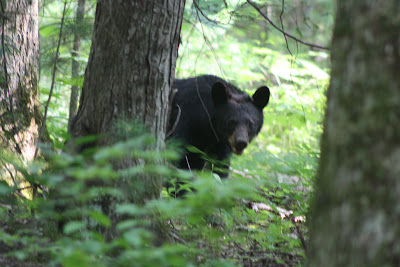 Posted by Mark Churchill at 11:15 AM No comments: 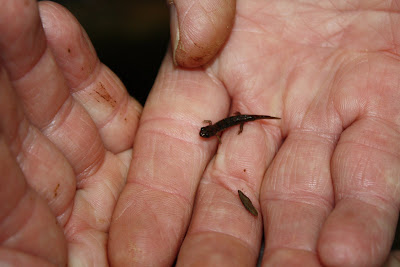 The Great Smoky Mountains are sometimes called "The Salamander Capital of the World". On an individual basis, salamanders (known colloquially as "spring lizards") outnumber all other vertebrates—birds, bears, fish, raccoons, humans, bats, deer, etc.—in these mountains. But it's not just that there are lots of salamanders here—there are many different kinds of salamanders here: twenty-five to thirty species, more or less. The "more or less" depends on who you ask, and when: several currently recognized species have been lumped with other, more widely-ranging species in the past, and some experts believe that there is more splitting to be done. There is a consensus, however, on one fact—the southern Appalachians, and the Smokies in particular, boast a greater diversity of plethodontids or lungless salamanders than anywhere else on the planet.

The Jordan's salamander (Plethodon jordani) is endemic to Great Smoky Mountains National Park; another species, the imitator salamander (Desmognathus imitator) is restricted to the Smokies and the adjacent Balsam Mountains. Because mountains have much in common with islands, these and several other high-elevation amphibian species may be particularly vulnerable to global warming: as the climate grows warmer, their habitat shrinks; with nowhere to go but up, they might eventually run out of space if current temperature trends are not reversed. At present, however, the Jordan's salamander is quite abundant within its limited range. The imitator is somewhat less so, but that is to be expected: it is a Batesian mimic taking advantage of its similarity in appearance to the unpalatable Jordan's; this form of mimicry is most effective when the mimic is relatively uncommon and predators are more likely to encounter the genuine (distasteful) article. Interestingly, though, only some imitators look like Jordan's; where imitator salamanders co-occur with Santeetlah salamanders (Desmognathus santeetlah) or Ocoee salamanders (D. ocoee), some individuals look like those species, which predators are not known to find aversive.

...All of which goes to illustrate a basic point about plethodontid salamanders: they're confusing as hell. Hardly any of these species are uniform in appearance, most look very similar (in some guises) to other species, many hybridize at least occasionally, and even if you're a professional herpetologist with DNA samples and a fully-equipped lab, no identification will be forever beyond dispute because salamander taxonomists agree on very little. Evolution is an ongoing process, after all, and not always conducive to neat little boxes.

With those caveats in mind, let's take a look at a couple of low- to mid-elevation 'manders.

Spotted dusky salamanders (Desmognathus conanti) are widely distributed across the Southeast, and are generally found at lower elevations in the Smokies. These were found at Laurel Creek, between Townsend and Cades Cove, on the Tennessee side of the park. (They were captured in water and placed on the sandy bank for photographic purposes, then returned to their stream.) 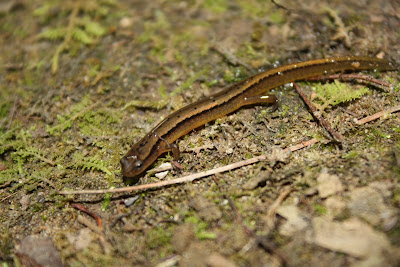 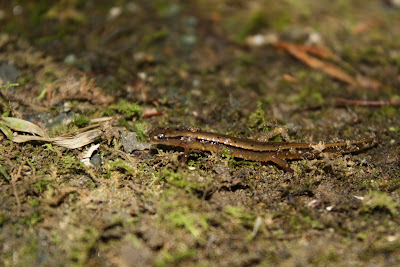 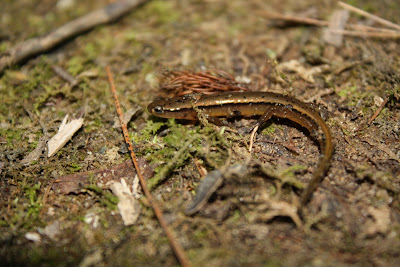 The next two photos might also represent D. conanti—note the similarity of color scheme if not pattern—but I believe they are in fact seal salamanders. Seal salamanders (Desmognathus monticola) also occur across the Southeast and are (surprise, surprise) quite variable. Stephen Tilley and James Huheey, authors of the handbook Reptiles & Amphibians of the Smokies, explain the common name: "Individuals are often observed during the daytime, posed on wet rocks in the spray of rushing streams with their heads raised to create profiles reminiscent of a seal's." 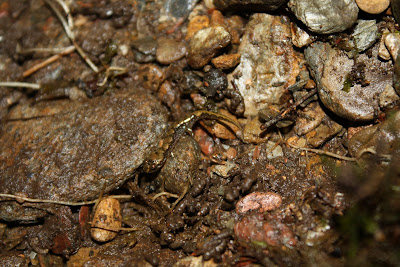 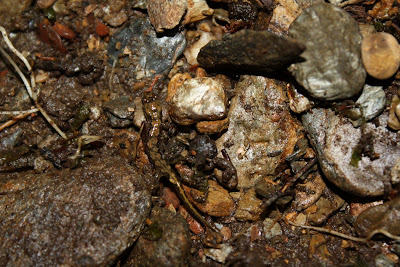 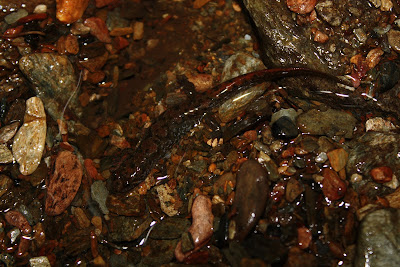 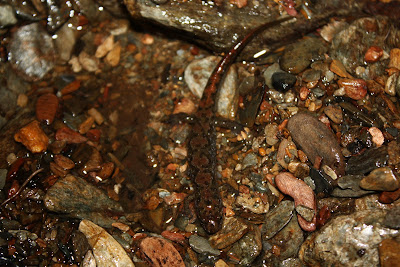 ...and nearly black. Incidentally, all of the photos I've attributed to seal salamanders are in situ shots from a single location on a small tributary creek of the Little River near the park entrance at Townsend. 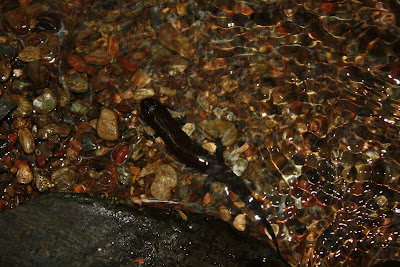 By the way, if I've given the impression that scientists who study salamanders are contentious, it's only fair to point out that their subjects are as well. The dusky at lower left in the picture below (again, from near the park entrance at Townsend) had better be careful: seal salamanders are not at all shy about eating other salamanders, including their own kind. 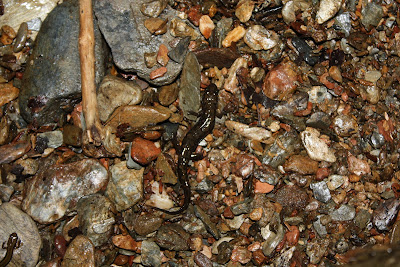 A few tools to take with you for a salamandering expedition (this is not necessarily a comprehensive list):

Taken along the banks of the Middle Prong of the Little River, near Tremont: 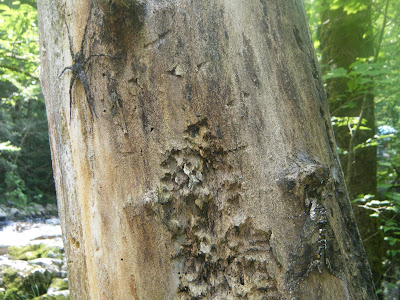 The spider was nearly the size of my outstretched hand. (I buy my gloves in size XL.) The kind of arachnid that might bring to mind Shelob or Aragog. But did you notice the moth? 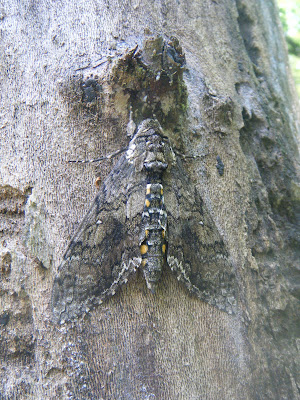 Last summer, we built a fence had a fence built around most of our yard, which was a sizeable investment but a huge quality-of-life improvement, especially for the dogs. It also had the unintended benefit of providing a couple of sites for new niche gardens. This is the Great Smoky Mountains garden we built for Susan. [Click to embiggen.] 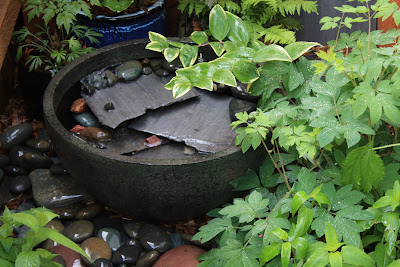 It's impossible, of course, to replicate an ecosystem dominated by dramatic terrain and huge trees, especially in such a tiny area (approximately 3'x6'). Instead we decided to let the tiny area work for us by focusing on microhabitat, selecting plants such as one might find growing in the understory of the Smokies' forest, perhaps alongside a cold freestone stream. The forest itself is merely suggested by the shade provided by the fence. 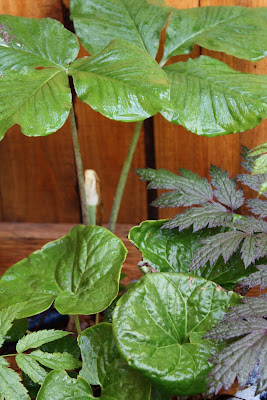 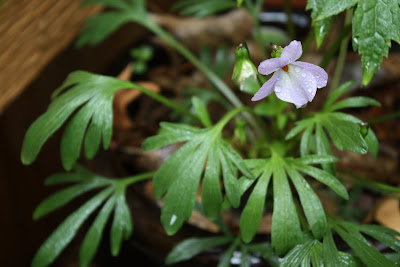 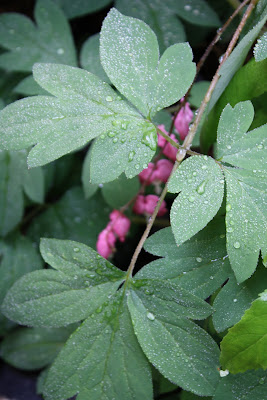 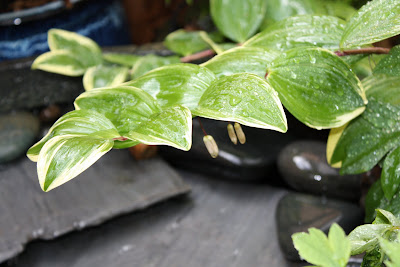 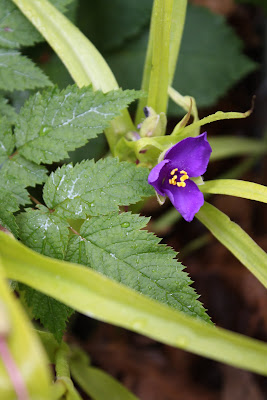 Besides those pictured, plants include ferns, turtleheads (both pink and red), bee balm, and cinquefoil. Most are Smokies natives, but we also made use of cultivars and, in some cases, close relatives as stand-ins. Water, another essential element of the Smokies, is provided in the basin (fiberglass, but with a convincing slate finish) and further suggested by the river rocks that "flow" from its foot. 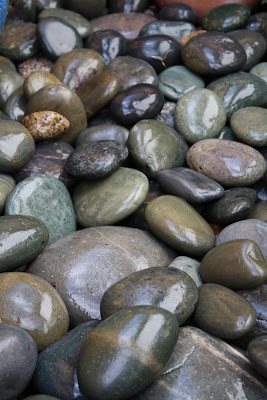 The garden was started last year, and has become fairly well-established; our biggest challenges have been remembering to water frequently (this is a lot thirstier than our prairie garden) and keeping the dogs from trampling it too badly. Anya and Mandie are the main culprits; Max is usually content to doze on the porch of the mudroom nearby. 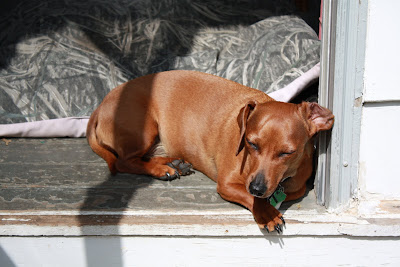 Soon to come: some photographs of/from the real Smokies.

Posted by Mark Churchill at 5:30 PM No comments:

The kids are alright

Following up on a theme previously established by Patrick Burns (Terrierman's Daily Dose) and the Querencia crew, "The Kids Are Alright": Today's example is Mitchell Renteria, family friend and frequent photographic contributor to Flyover Country.

Mitchell already has at least one professional credit as a photographer, having illustrated my hawking-dogs article in International Falconer magazine a couple of years ago. He also interned for a semester with National Geographic photographer Joel Sartore. And Mitchell, who is considering a career with the National Park Service, is even now on his way to a summer internship at Yellowstone. Not a bad resumé for a kid who just graduated from high school!

A couple of pictures from the archives: 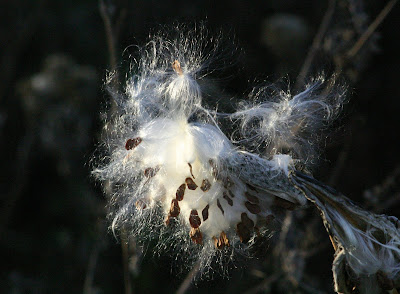 Golden river. This photo has incredible peace-inducing properties. It's been the background on my computer since the day Mitchell sent it to me; I share it now with the hope that everyone who sees it will sit and sigh and lose track of time for a few moments at least. 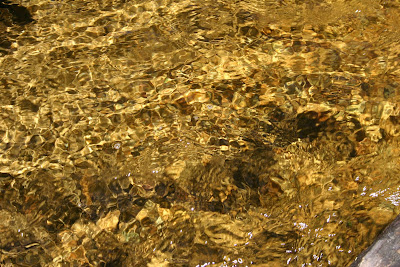 Posted by Mark Churchill at 11:36 AM No comments: