From the good folks folks at Despair, Inc. 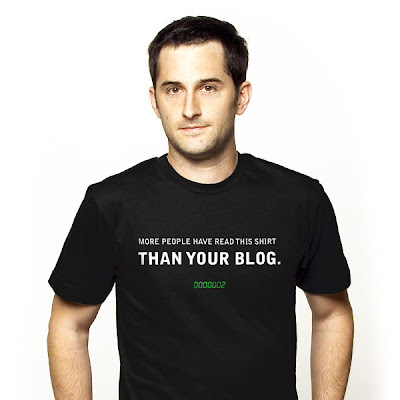 Posted by Mark Churchill at 10:42 AM No comments:

A bird in the hand

The phone's been ringing off the hook lately with bird-in-a-building calls from Raptor Recovery Nebraska: a Cooper's hawk in the secured hallway of a shopping mall, a kestrel in a hospital under construction, a Cooper's hawk in a warehouse. Most of these rescues have been up in Omaha, and the drive has become tiresome (surprisingly, it took three days to get the Cooper's hawk at the mall), so when I got the call Wednesday afternoon about a hawk (species unknown) inside an Omaha printing facility, I was more resigned than overjoyed at the prospect of another trip up I-80.

Upon arrival, I met the general manager and we went in for a look around. He hadn't been able to give me a great description, but I was more or less expecting another Cooper's.

Instead I found, and immediately trapped, a passage jack merlin. [Photos by Mitchell Renteria (1 & 3) and myself (2 & 4)] 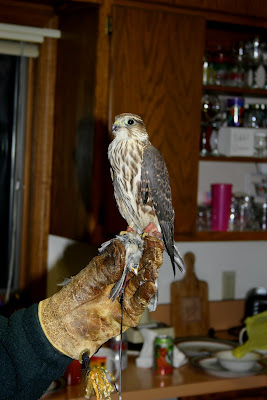 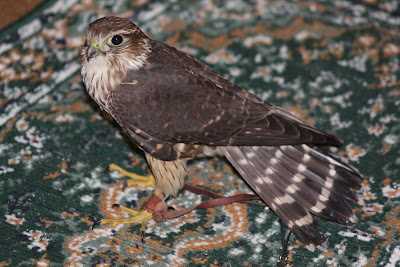 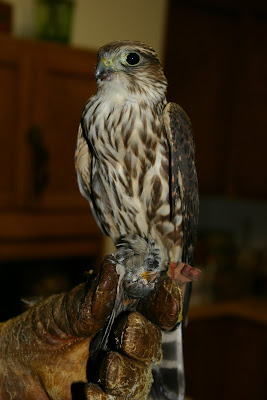 After all the miles I put on my car this fall without trapping a merlin, it's so nice to have this jack fall into my lap. This he did almost literally—having been inside for nearly a week, he hit the trap as soon as I set it down and turned my back, but before I had a chance to walk away. Razor thin, but otherwise in good shape, I have high hopes for the little guy. 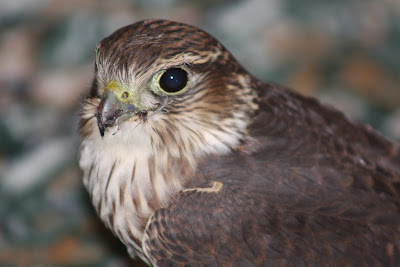 And damned if that drive didn't seem easier this time around.

These shots courtesy of Mitchell Renteria. I'm really glad there are other (and better) photographers in the group, especially since I don't carry a camera when it's my bird in the air... 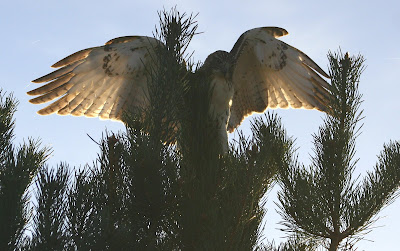 [Stekoa in flight at Davis Creek] 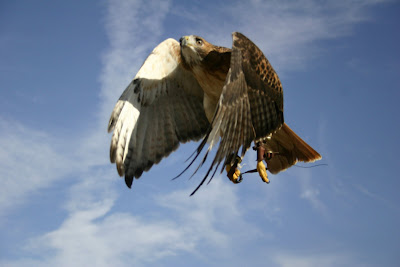 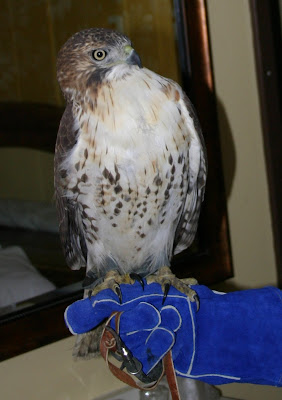 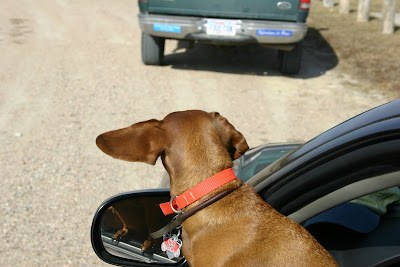 Some notes and photos from the recent Nebraska Falconers' Association field meet in Burwell:

The meet started (for the early risers among us, anyway) in the pre-dawn quiet Saturday morning. We drove to a shortgrass prairie hillside where, as Eric Johnson advised us, sharp-tailed grouse lek in the spring and roost at almost any time of year. He pointed to the next ridge over and said that, due to subtle habitat differences, greater prairie-chickens were to be found there instead. (Rosehips on this hill for the sharps, a favored grass on the next ridge for the chickens.) Eric unhooded his gyr x peregrine hybrid, River, and after a short pause atop the truck, she took to the air. 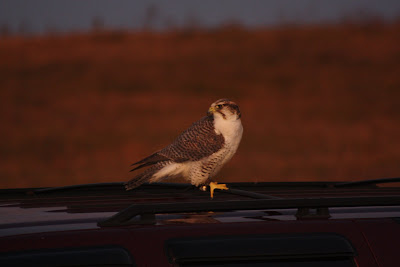 Once she'd attained her pitch—five hundred feet or so this morning; Eric would prefer higher but River favors her gyrfalcon side and doesn't need much height to generate speed and power—Eric and I ran in for the flush, accompanied by Gunner, Eric's English setter. River stooped and hit a grouse, then stooped again after her pitch-up. We both agreed it had been a fatal hit, and found her on her kill under a lone cedar tree not too far from where the flight had begun. It turned out to be a prairie-chicken after all; the self-imposed segregation of sharps and chickens is incomplete, and hybrids are not uncommonly found.

[River and her chicken] 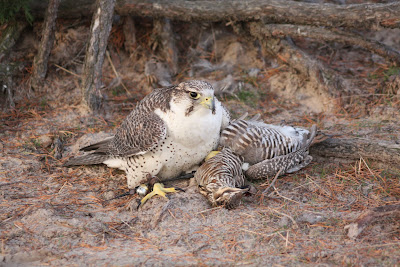 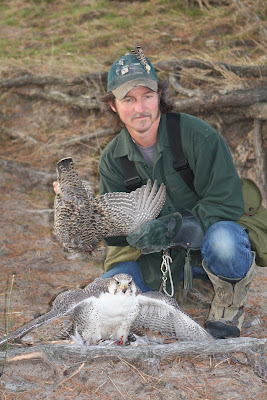 [Gunner cools off in a stock tank] 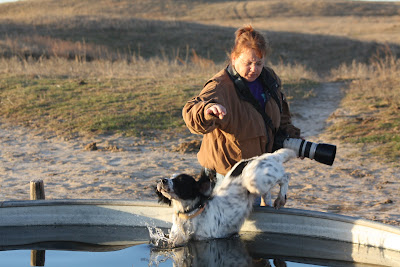 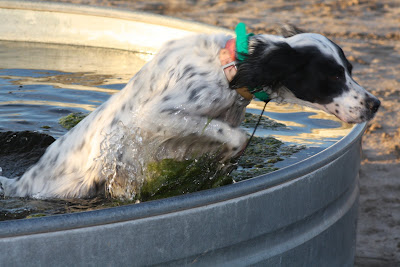 We flew bunny hawks in the afternoon. I had really been looking forward to an "easy" rabbit hunt in the Sandhills, where the cover tends to be more sparse than it is back home. What I got was a two-hour ordeal (maybe three) in heavy cover at Calamus Reservoir, as Stekoa followed cottontails running alternately through hillside cedars growing as dense as any southern Appalachian "rhododendron hell", impenetrable willow thickets growing at the edge of the lake, and enormous piles of driftwood bleached to silver by the relentless prairie sun. I would have gladly abandoned the hunt, but I had little hope of calling Stekoa down while he was seeing rabbits, and anyway Maxine and Anya were working so hard in the heat that they made me feel ashamed for even thinking of quitting. The crowd of beaters and onlookers was repeatedly split as we traversed the area, and eventually most of them set off to fly other hawks in a more congenial setting. Finally, after everyone but Donna Vorce had departed, Stekoa was induced to leave the cedar hell for a more open area of grassland dotted with individual cedars, adjacent to a small cattail marsh, and within a few minutes he had his rabbit.

[Wind circles on the beach at Calamus] 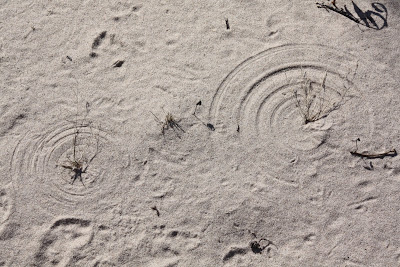 Karl Linderholm caught a rabbit with his Harris' hawk, Clarice, and first-year apprentice Nick Morris and his redtail took their first rabbit together. Scott Backlund bravely flew a new passage redtail, trapped just 18 days earlier, with a crowd of about twenty people in attendance. Surprisingly, only a single bunny was flushed for her, but she handled herself well and ought to be as steady a hawk as one could wish for. No rabbits were flushed for Clarice's brother Hannibal, flown by Bob Noble, and after three voles Bob decided to call it a day. 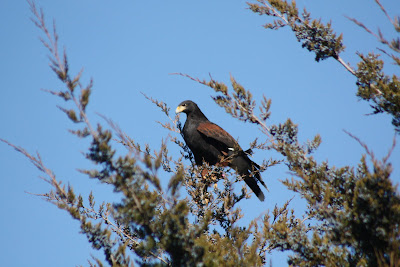 [Karl and Clarice with her rabbit] 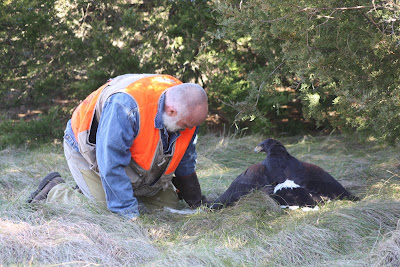 Sunday was another early morning, this time with Anita Johnson and her hybrid tiercel, Riddick. Riddick is River's brother, but he seems more peregrine than gyr—when he was at about six hundred feet, another longwinger in the party commented on his nice pitch, to which Anita responded bluntly, "That's shit; wait 'til he gets there." "There" was something like eleven or twelve hundred feet, and when Riddick came down those of us who had lost visual contact were able to find him again by the ripping sound made by the air rushing through his wings. He hit a prairie-chicken and disappeared over a hill, but despite the cloud of feathers that went drifting over Eric and Karl, both Anita and I knew that the chicken would keep going and Riddick would soon be back. He did return, and once again mounted into the sky, but a wild prairie falcon came in and crabbed with him; by the time that interaction was over, Riddick was spent and Anita called him in to the lure. 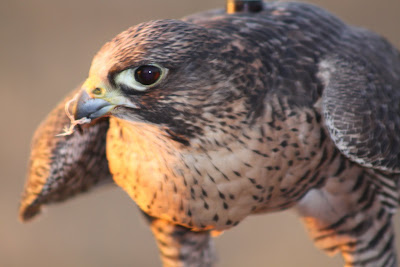 The meet was more or less over by breakfast, except for a small party of us who adjourned to Davis Creek Reservoir for a last bit of bunny hawking. The hills above the lake, with their sandy soil, are characterized by healthy cottontail populations, large stands of densely-growing switchgrass, and an abundance of holes the rabbits can use for escape cover when the switchgrass isn't enough. But eventually both hawks flown, Clarice and Stekoa, caught bunnies and we all headed for home.

[No longer with us: This church near Davis Creek, photographed last winter, has since fallen down. A lot has changed since last year...] 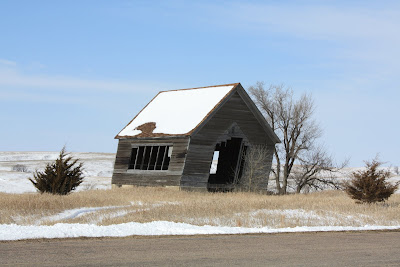 The can-do, make-do spirit is alive and well 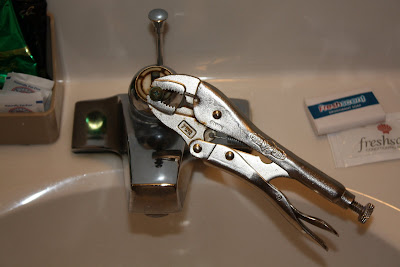 It may or may not be elegant, but it worked great all weekend. This pair looks old enough to be Nebraska-made; the Vise-Grip was invented and, until recently, manufactured in DeWitt. Rubbermaid bought the company in 2002; last year they closed the factory in DeWitt and outsourced production to China. Word is that the quality has suffered.
Posted by Mark Churchill at 11:27 AM No comments:

In falconry lingo, "entering" refers to the introduction of a hawk to new quarry: A newly-trained redtail is said to be entered on rabbits after catching its first cottontail, a peregrine might be entered on ducks before taking on more difficult game like prairie grouse, and so forth. Falconers don't usually speak or even think of terms of "re-entering" an intermewed hawk; entering is a one-time event, rather like losing one's virginity.

But I have to admit that I was reconsidering the concept this season. Stekoa and I ventured back into the field a bit later than usual, owing to scheduling conflicts and the vagaries of this October's weather. And it was starting to feel as though my avian partner had forgotten all about rabbits: until yesterday, he was averaging five "miscellaneous" kills (mice, voles, snakes) per outing, and could easily have doubled that if I had had the patience. Flights at bunnies were few and far between, not to mention seemingly half-hearted. Why follow me and the dogs, why put in hard flights at rapidly fleeing cottontails, when so many delectable treats are to be had by simply dropping out of a cedar tree?

Yesterday, though, everything came together. The dogs and I flushed a couple of rabbits almost immediately, and Stekoa pulled fur on one before it escaped into standing corn. (The strange weather has also played havoc with the harvest.) Suddenly he was all business, following closely and, better yet, taking good high perches out in front of us. The dogs had a good day, too, Anya yipping up several scent trails—most of which also led into standing corn—and Maxine running full-tilt in several directions at once despite the uncomfortable warmth of the afternoon. After several good but unsuccessful flights in heavy cover, I got our party turned around back in the direction from which we had come: it was hot, I was tired even if Maxie wasn't, and I wanted to end the hunt on a high note rather than letting it descend into another moustravaganza. But, as so often happens, we found another rabbit and Stekoa caught it within sight of the car. Triumph, sure, but also relief.

Last night I mentioned to my daughter that (by our standards, at least) I hadn't seen her much lately: between work, hawking, and other responsibilities—including a couple of hawk-trapping assignments for Raptor Recovery—I haven't been able to take her to school in the mornings or pick her up in the afternoons. "That's okay, Dad," she said. "I'm glad you've been helping the hawks and getting out hunting. It's good for you."

Ellie and my wife, obviously, are both very supportive. They also know me very well. Susan says I'm at my most difficult just before hawking season, my short temper being symptomatic of inactivity, confinement, and repressed hunting urges. And Ellie's comment made me realize that I had not just been anxious to re-enter Stekoa on game. I needed to re-enter my life, to fully engage in the pursuits that bring me alive again after the long stultifying months of summer.