After a three-year delay—exactly the amount we had promised to avoid—we rang in the new year with some new ginger beers and ginger ales; this is our review. Long-time readers will be familiar with the format, but for background, here are the previous posts:

As with the 2015 version, this post will be limited to new entries. Tasters were yours truly, Jessa, Ellie, and Ellie's beau, Nick.

Barons Ginseng Ginger Ale. The only address apparent from the bottle was  an e-mail address; later, Jessa discovered "a locally made retro California brand" under the cap, but California's a big place, so "locally made" is still a bit vague. This, plus a bland label, had our expectations low. Those expectations were met. Made with cane sugar and natural flavor, but flat tasting despite the carbonation. The ginseng didn't do much for it. Clear but with some colour, this is a GGA, but one we won't bother with again.

Brickway Brewery Ginger Beer. This one hails from nearby Omaha, Nebraska. Canned rather than bottled, so points deducted—then earned back on the strength of "cold-steeped with fresh ginger." Golden colour but not cloudy, smooth but not especially sweet; "almost really good", as one of our tasters put it. I think this judgment holds true if viewed as a GB, but it's actually on the borderline between a GB and a GGA, with cream-soda influences.

Misty Wither's Ginger Beer, by Orca Beverage in Mukilteo, Washington, was a nice surprise. In a clear glass bottle with ornate lettering and scrollwork on the label, it looks like an old brand—but it's apparently new. The drink itself is very pale and relatively clear, so we weren't expecting much spiciness. And, true to our expectations, it got off to a smooth start, but that was followed by a substantial ginger bite and a pleasant heat that lingered long after our glasses were drained. Similar to Caribbean GBs despite appearances. Cane sugar, ginger extracts and natural flavors.


Olde Brooklyn Park Slope Ginger Ale by White Rock Beverages is notable mainly for its marketing. I'll explain: One of our tasters noted right from the beginning, "You know it's old because it has an 'e' at the end." Furthermore, the address given on the label is Whitestone, New York, which a quick check of Google Maps informs me is located in Queens, not Brooklyn. White Rock's website goes on to describe "nostalgia-themed sodas" that "capture the flavour and spirit of the oldest and most famous Brooklyn neighborhoods". Uh-oh. Not inspiring. They did at least use cane sugar and natural flavors; the result is a decent but not standout DGA, comparable to Canada Dry or Schweppes. (If you want something from Brooklyn, I again recommend Bruce Cost Ginger Ale, which we reviewed in 2015.)

Our last entry this year has a unique twist: cucumber. I'll let the label tell the story: "In late 18th century Grand Isle, Louisiana, when the gentleman pirate Jean Lafitte still patrolled local waters, you could find an abundance of two things—seafood and cucumbers; the latter being their biggest cash crop until World War II. Chances are if you walk into a Louisiana backyard garden on a warm summer day, you'll still find a few cucumber plants. Swamp Pop Jean Lafitte Ginger Ale blends the refreshing flavor of cool cucumbers with a spicy ginger nod to Jean Lafitte's southernly travels through Caribbean waters." This soda is actually made in Lafayette, not Grand Isle, and you wouldn't mistake it for a Caribbean GB—this is a clear GGA in clear glass—but the cucumber works with the ginger to produce a sweet and mild ginger drink. Made with natural flavors and, of course, cane sugar. (Could you expect anything but cane sugar out of southern Louisiana?)

'Til next time...stay thirsty, my friends.

Posted by Mark Farrell-Churchill at 2:09 PM No comments: 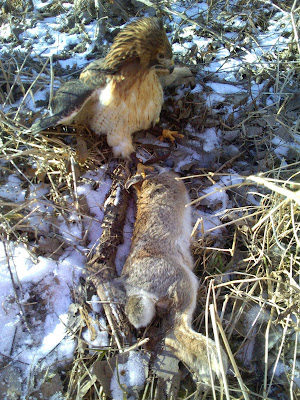 Stekoa with the first rabbit of 2019, taken this morning at Pawnee Lake.

Posted by Mark Farrell-Churchill at 6:50 PM No comments: 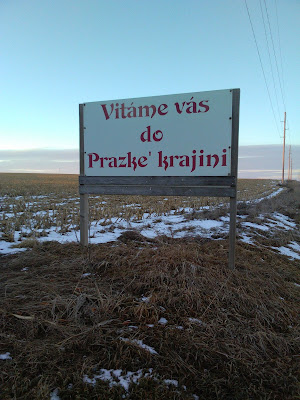 A few days ago, Stekoa, Anya, and I drove up to the Bohemian Alps—a region of rolling hills settled by Czech immigrants in the 19th century—near Prague, Nebraska. (Maxine, getting up in years and having hunted hard the day before, opted for a day off.) We were rewarded with lovely scenery and a fantastic flight on this, our last rabbit of 2018. There will be more before the season ends, inshallah. 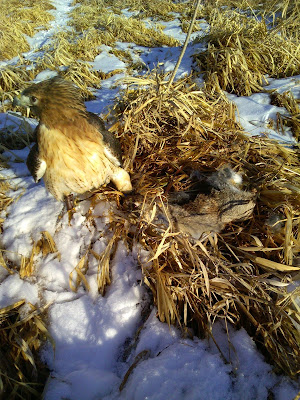 Posted by Mark Farrell-Churchill at 11:00 AM 2 comments:


Posted by Mark Farrell-Churchill at 10:30 AM No comments: