Of all the things you wouldn't want to fall out of your kitchen cabinet, to deflect off the countertop and shatter on the floor...

...a large glass bottle of Karo syrup would have to be near the top of the list.

Particularly if the floor was already strewn with spilled bird seed.

Emma Maris has a nice post over at The Last Word On Nothing entitled "Coming of Age in a Trash Forest", about secondary forest contrasted with "The Big Pristine". RTWT, but the final paragraph is the one that really got me:

My unscientific guess is that upwards of 80% of ecologists and conservationists first learned to love nature in places that weren’t pure, pristine or wild: culverts in cul de sacs, empty lots, summer camps on formerly logged land, hedgerows and the weedy margins of agricultural fields. We loved them as kids, and now we are learning to love them again as scientists and environmentalists. It is a kind of homecoming.


I'm definitely an eighty-percenter. Most of my childhood was spent in the decidedly more rural environs of Loch Raven, but the first piece of ground to attract my attention as a young naturalist was in Catonsville, Maryland, on a street named for a long-defunct convent which, I suspect, left the neighborhood poorer for its absence. This was a long-settled and densely-populated area that was entering a period of decline. (When I returned years later with childhood friend Joann Grimes, we discovered that, apart from everything being smaller than we had remembered, the lane had made the slide from "somewhat sketchy" to a decidedly Not Good Neighborhood.) Across the street were quad-style apartment buildings, but ours was a Baltimore-style rowhouse, albeit without the marble steps.

Rowhouse residents parked in an alley behind the elongated building; the car I remember best was "Uncle" Carmine's (my friend Cindy's uncle, but he was Uncle Carmine to every kid on the block) Chevrolet Vega, distinguished by its bumper sticker: "You toucha my car, I breaka you face." (With Carmine, at least, the threat of violence could be taken as a joke.) But beyond the dusty gravel of the alley and up a red-clay embankment lay "the woods".

The woods, along with a small meadow on the other side, were the only "wild lands" accessible to the kids of the neighborhood. Here were built innumerable tree-forts, which lasted until blown apart by summer thunderstorms, pulled down by winter snowfall, or (most often) cannibalized to built bigger and better forts.* Here we could play at Tom Sawyer and Huckleberry Finn, though in retrospect I doubt many of the neighbor kids were literarily inclined. And here, just a stone's throw from my back door, was Nature itself—not just pictures in a field guide, but actual living things that made field guides worth carrying around.

Rank and weedy as they were, the woods tasted fine. There were honeysuckle vines (one of which, on an isolated section of chain-link fence that marked an abandoned right-of-way connecting to the alley, Bobby Quigley and I accidentally set alight with percussion caps one autumn day), blackberry tangles, and abundant mulberry trees. I'm sure many adults would have welcomed the demise of the neighborhood's mulberry trees (as long as it required little or no effort on their part), for the berries left purple stains on everything: cars, sidewalks, laundry hung out to dry, and quite often the faces of their progeny. But to a kid, the stains are worthwhile: nothing beats the taste of sun-warmed, bordering-on-overripe mulberries fresh from the tree in which you are perched watching the birds.

And snakes. The woods were home to a few black rat snakes (Elaphe obsoleta in the books I grew up with, though I see the species has now been renamed Pantherophis obsoletus) and abundant eastern garter snakes (Thamnophis s. sirtalis). I kept both of those, but my favorites were the diminutive Dekay's snakes (Storeria dekayi) and even more delicate, even more exquisite ringnecks (Diadophis punctatus). I never kept any of them for long, and some of them not even as long as I intended, for the Dekay's in particular were talented escape artists. My little brother had a collection of rubber snakes, lizards, and turtles, and as I recall it was one of my prodigal Dekay's that startled my mom late one night as she was picking up after Greg in the basement. I was awakened by my dad to remove the not-rubber-after-all snake, but he had a hard time concealing his amusement.

Berries and birds and snakes were everyday finds, but once I got really lucky and found a fossil on the edge of the woods: a chunk of mudstone covered with scallop impressions—Chesapecten, I've always assumed. (I still have it somewhere, and will post a picture later if I can remember which box it's in.) For a typically dinosaur-besotted little boy, this was a red-letter day. It wasn't Montana or Utah or Mongolia, just the inner suburbs of Baltimore, but my woods had fossils! 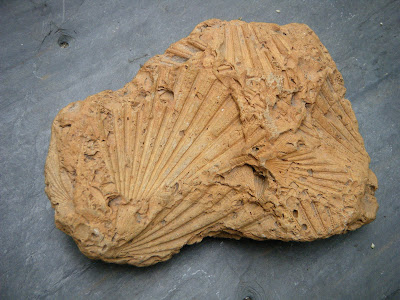 As far as I know, the woods are still there. My parents bought into the rowhouse for $15,000, give or take, about 1971; the unit next door was recently sold for something between $175,000 and $185,000 (thank you, Internet!). I'm not sure if that represents a neighborhood renaissance, an overheated mid-Atlantic housing market, or simply forty years of inflation, but I'd be willing to bet the woods are still weedy and at least as litter-strewn as when I was a kid. And I'd be equally willing to bet there are still birds and snakes and maybe even fossils waiting to be found there. What I don't know, in this age of nature-deficit disorder, is whether there are still kids who get off the couch (thanks again, Internet, and video games, and cell phones...) and explore those woods. No bet this time, but I sure hope there are.

* Quote from Emma Maris: "The nice thing about secondary forest is you can pound nails into it." I considered making this the title of my post.
Posted by Mark Churchill at 11:48 AM No comments: