One by the Dixie Chicks for Memorial Day:

Rachel Stewart sent the following pictures from her farm in New Zealand:

Her garden of native plants. 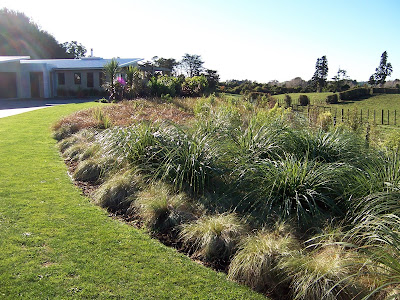 The hill out back. I suppose a person could get used to seeing this every morning... 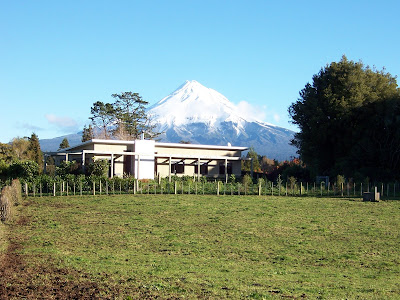 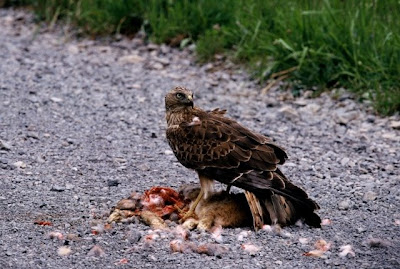 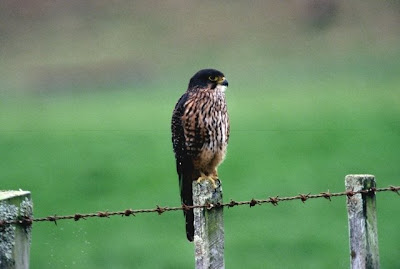 The karearea appears on the NZ $20 bill [sorry for the tiny picture, but notice how nicely the green matches Rachel's photo!] and is endemic to New Zealand. The kahu is also found in the wetter parts of Australia and on many of the region's islands. Apart from an occasional Australian kestrel (Falco cenchroides), which occurs as a vagrant, there are no other living diurnal raptors in New Zealand.

New Zealand also has one owl, Ninox novaeseelandiae, called ruru in Maori and morepork in English; both names relate to its two-note call. [Photo below courtesy of the Maungatautari Ecological Island Trust.] 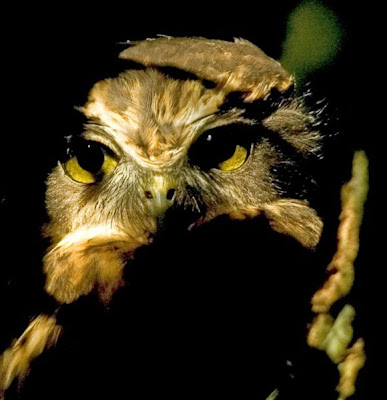 Rachel writes that it's frustrating to see such magnificent raptors on a regular basis knowing she'll likely never be allowed to fly them, due to New Zealand's ban on falconry: "You Americans don't know how lucky you are!! Actually, you probably do know how lucky you are and, indeed, it has been more hard work than luck. Praise be to NAFA!"

A few decades ago, when falconry was unregulated but not explicitly banned, a man named Rob Wheeldon enjoyed very modest success flying kahu at (introduced) rabbits. In a 1992 Hawk Chalk article, he recalled that 14 rabbits in a season had been his best record:

It goes without saying that the harrier is certainly not the ideal falconer’s bird. Nevertheless, this bird does provide a challenge to get the very best out of its limited potential and possibly that of the falconer as well, which when everything goes according to plan makes the sweet smell of success just so much greater.

The ban may very well have been enacted as a direct response to Mr. Wheeldon's activities, which is especially unfortunate since he seems to have been a typical falconer/conservationist. In addition to rehabilitating injured harriers, he and his wife ran a breeding-and-hacking project aimed at bolstering the population of the New Zealand falcon.

Karearea have been also captive-bred abroad, and are perhaps most notably employed by Nick Fox's mounted hunt in the UK, the Northumberland Crow Falcons. Sadly, they seem to be on the decline in their home country despite legal protection. But Dr. Fox, who wrote his dissertation on the New Zealand falcon, has embarked on an interesting conservation programme called Falcons for Grapes, the goal of which is to provide nesting sites in New Zealand's vineyards; the falcons in turn should reduce losses to depredating birds such as starlings, blackbirds, and thrushes.

Essentially we propose to use one wildlife problem—the conservation of falcons—to mitigate another one: bird damage to grapes. Conservation is a luxury; it costs more money than it generates. In this project we plan to generate funding from commercial beneficiaries—the wine industry—to conserve the falcons. It will be a symbiotic relationship.

Unlike most bird abatement projects employing raptors, Falcons for Grapes does not require that the birds be trained or actively managed. But there are, I suspect, a few enthusiasts like Rachel who would love to have the opportunity to train and fly their native raptors at quarry. Given the negligible impact of well-regulated falconry on both raptor and game populations—not to mention the fact that so much of the likely quarry in New Zealand is non-indigenous anyway—I can think of no compelling reason they should not be allowed to do so.
I've encouraged Rachel to get together with Australia's Peter Nolan and other like-minded people to form an "ANZAC Falconers' Association" to lobby both governments for a change, and I'm sure that many NAFA members would be glad to share the benefit of their experiences in opening up previously closed states and provinces. Free the Antipodes!

From The Red and Black, the UGA student newspaper, a short video about the Flying Rats' recent visit to Conehatta on the Choctaw reservation in Mississippi. I wasn't around long enough to make the trip west, but I sure do miss the game—played here for fun and comradery.

Posted by Mark Churchill at 7:57 PM No comments:

Meet the Beetles, and other lacrosse miscellany

The Lincoln Rampage were knocked out of the Nebraska High School Lacrosse Association championships with a first-round loss, 14-3, to Millard West last weekend. The outcome was not altogether unexpected—our varsity team was winless through the regular season—but we did think that West displayed a certain arrogance and lack of sportsmanship by posting a Facebook invitation to their semi-finals game before their game against us was even played.

West went on to win the championship; meanwhile, we're looking forward to next season and beyond. We graduated just one senior, with two juniors moving up. The rest of our players are rapidly-improving freshmen and sophomores, so in two years we may be the team to beat. Thanks to a generous equipment grant from US Lacrosse, Brine, and Warrior, as well as a positive working relationship with the Abbott Sports Foundation, the club's existence is secure and success will come eventually.

My cousin Laura, a freshman midfielder for the Catonsville Cardinals, had a much better year. She had several multiple-goal games (although my search for video highlights has been unsuccessful) and Catonsville, the defending national junior-college champions, lost only one regular-season game. The Cardinals fell to that same team, the Onondaga Lazers, last weekend in the NJCAA semi-finals; Onondaga went on to win the national championship. I congratulate Laura and her teammates on a successful season—and if you have to lose, you may as well lose to the best.

After playing for the Omaha Rhinos (West) last summer, some friends and I have started a new team, the Salt Creek Tiger Beetles. (The team is named for Lancaster County's endangered endemic—three guesses who came up with the moniker.) Despite being older and slower, we dealt the Rampage another loss, 8-6, this morning to claim the first annual (and very unofficial) Lincoln City Lacrosse Championship. Yours truly scored the first goal as well as the game-winner. Here's hoping that's not the high-water mark of my season... Regular-season play in the Great Plains Lacrosse League begins June 6th.

* * *
I've written before about my favorite professional team, the Baltimore-then-Washington-but-now-playing-in-Annapolis-so-let's-just-call-them-Maryland-or-maybe-Chesapeake Bayhawks. Last night they faced off against the MLL's newest franchise, the Toronto Nationals, in the first game of the season. Final score: Toronto 17, Bayhawks 16. Not the result I had hoped for, but here are three things to like about the Nationals:

With all teams now playing in one division, perhaps it will come down to the Bayhawks vs. the Nationals in the finals. Something to hope for, anyway...