Ellie and I have gone fishing a couple of times lately; below is her first trout on her new CGR rod. (Photo by Ellie herself.) She likes the slow-flexing fiberglass, and it obviously gets the job done, as she out-fished me at Fremont on Friday. 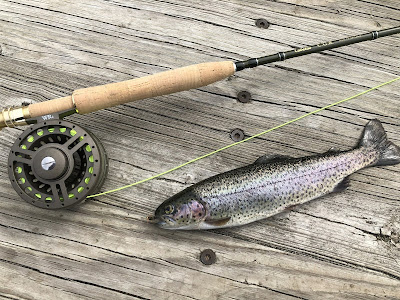 We have loads of photos to share, but the laptop is out of commission again, so it may be a while before they're posted. Please check back from time to time...

Posted by Mark Farrell-Churchill at 11:32 AM No comments:

I've just wrapped up my hawking season, but here are a couple of photos from a day out hawking with Pat Stull on a warm day back in late January. These were taken on the northeast side of Wagon Train Lake; I flushed a rabbit from what we call "carpet grass"—dry yellow grass that tends to cover not only the ground but also brushpiles and deadfalls near some of our local lakes—and Stekoa took it in a nice sprint. 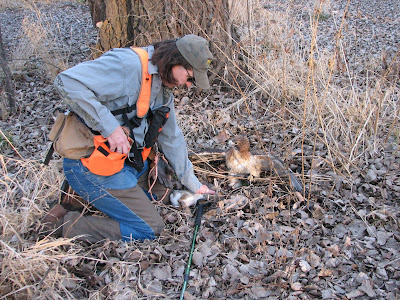 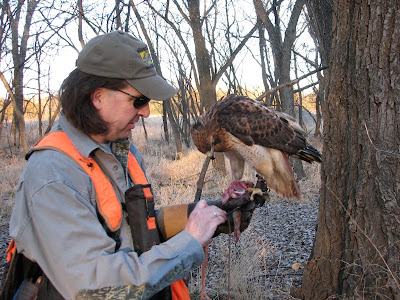 The only story here is how hard we worked, and how far we had to walk, for that rabbit. Wagon Train used to be one of our most productive spots; Mike Cox, Karl Linderholm, and I used to hawk it nearly every day throughout the season, and there were plenty of cottontails for our three hawks plus the resident redtails. In recent years, though, I've barely hawked Wagon Train at all—it's hardly worth the effort.

The winter of 2009-2010 was a tough one; it certainly took its toll on local rabbit populations, and it's possible, I suppose, that some localities might still be experiencing aftereffects. But I put the decline of Wagon Train and several other spots as hawking grounds down to management. The Game and Parks Commission has cut down huge numbers of trees, mostly invasive red cedar, ostensibly to benefit pheasants and other game- and non-game grassland-nesting birds. I would support these efforts if they were effective, but unfortunately there has been no follow-through on the cutting. The cut trees are heaped into huge brushpiles—often the size of houses—and left there. For years. Coming up on a decade at Wagon Train.

Pheasants, meadowlarks, dickcissels, etc. don't nest in cedar groves, but neither do they nest amidst enormous brushpiles. Meanwhile, there may be rabbits in those brushpiles, but they're inaccessible in their fortresses. I strongly suspect that great horned owls are the only one getting these rabbits, as they need hardly venture out in the daytime. So a rabbit like this one is in some ways a nostalgia trip, but I want something better: I want my hawking grounds back!

Posted by Mark Farrell-Churchill at 11:27 PM No comments: