This one by Counting Crows captures some of the melancholy and regret that can characterize this time of year, but not without an element of hope as well: "And there's reason to believe that maybe this year will be better than the last..."

A happy New Year and peace to all.

Posted by Mark Churchill at 2:00 PM No comments:

Three for the bookshelf or coffee table

I've been reading three relatively new large-format bird books lately, and offer this comparative review. (Almost too late for holiday shopping, I know, but it's a free service.)

First up is On Feathered Wings: Birds in Flight by Richard Ettlinger. This is primarily a photographic collection, purporting to be the first composed entirely of avian flight photos. The pictures are by the author and six other contributors, including Colorado falconer/photographer Rob Palmer. (I met Rob at a NAFA meet a few years ago, even drove him around briefly, and while I doubt he could pick me out of a lineup after such a short meeting, he struck me as a genuinely nice as well as talented fellow.) The book is unevenly divided into four sections: "Killers on the Wing" is the longest, followed by "Wings Along the Shore", "Wings of the Wetlands", and finally the abbreviated "Songbirds on the Wing"—eleven plates in this section, eight of which are photographs of swallows (certainly better than my efforts in that area). I'll confine my commentary primarily to the section on raptors.

As promised in the introduction, many of the photographs are "impossible" shots, or would be to ordinary mortal photographers: well-composed, crisply-focused, dramatic images of hawks and owls in flight. Some were taken at well-known migration points; several others are of falconry birds, either explicitly identified as "captives" or depicting commonly-trained birds outside of their natural ranges (e.g., Harris' hawk in Utah). In none of these latter shots, however, are the standard articles of falconry "furniture"—jesses, bells, telemetry transmitters—visible, so I assume that these have been digitally excised.

Also in the introduction, Ettlinger describes the book's images as "proving anew that a picture can be worth more than a thousand words, that text is an unnecessary embellishment." If only he had taken his own hint... I could overlook statements like "Birds are the only vertebrates able to get away by flying and to live pretty much every part of their lives in the air" (he's never heard of bats?) and assertions that birds mate in mid-air (true, possibly, of swifts, but not of most birds). But descriptions of peregrines "dive-bombing straight down at 200 miles per hour, skewering the victim in their beaks [italics mine], and spiriting it off..." are less excusable, considering that one of his collaborators is an experienced falconer. Ettlinger also presents some erroneous (or, at the least, highly unorthodox) taxonomic theory as fact: Beneath an exquisite Rob Palmer photograph of a stooping American kestrel, he claims that "The black ear patches on the sides of the head and the extensively gray wings of the male...reveal that this North American falcon species is not a true kestrel, but rather a hobby." The aplomado falcon might qualify as a New World hobby, but the AK's affinities are squarely with the kestrels. As for the description of bald eagles as "nearly deaf", I'll keep an open mind, but I'm skeptical.

Bottom line: On Feathered Wings is a visual treat, but the text should be taken with a large grain of salt—or skipped altogether.

Our second book, narrower in scope but more substantial in execution, is Paul Bannick's The Owl and the Woodpecker: Encounters with North America's Most Iconic Birds. I'm not as far into this one, but Bannick seems to be reasonably solid on natural history despite a relatively recent introduction to bird studies: his main interest was amphibians until a chance encounter with a saw-whet owl set him on a new path, and he set out to document and study all of North America's owls and woodpeckers. This pairing is never completely explained, but he does note that both are indicator species, and that about half of North American owl species are dependent on the work of woodpeckers for nesting locations.

The book's chapters are organized by geographic range and habitat type, starting on the Pacific Coast and moving counter-clockwise all the way to boreal forest and Arctic tundra. The appearance and behavior of owl and woodpecker species typical of each habitat are discussed, along with notes on population status and conservation measures that might be undertaken to benefit the region and its avifauna. Bannick's excellent photography can be found on nearly every page; in addition to intimate depictions of his target species and sometimes their neighbors, he has a good eye for landscapes, and his portraits of each habitat could be considered almost definitive.

Unlike Ettlinger, Bannick provides a bibliography for those interested in further research. A nice bonus is a CD collection of owl and woodpecker recordings (both calls and drumming in the case of the woodpeckers) by Martyn Stewart. Even without the CD, I would recommend The Owl and the Woodpecker to anyone interested in either or both of these groups; with it, this book constitutes one of the best bargains I've encountered at the bookstore recently.

The last book in the collection is the most narrowly focused, and succeeds for that reason and others. Owls of the United States and Canada: A Complete Guide to Their Biology and Behavior, by Wayne Lynch, was published last year by the Johns Hopkins University Press—which should be indication enough that this is a definitive work. Like Paul Bannick, Lynch is a gifted photographer as well as a writer, and all but one of the photos in the book stem from his own fieldwork. Here, however, the text does not take a backseat to the photography; Lynch goes into much greater ecological detail while still maintaining a readable and often personal style. Lynch's own anecdotes are supplemented with frequent reference to the work of other ornithologists, and he appends the substantial bibliography expected in an academic book.

The book is organized topically. Many readers will find "Son et Lumière", the chapter on owls' sensory adaptations, the most surprising and enlightening. Owls are often assumed to have hearing and vision far superior to that of humans, but the research findings related by Lynch indicate that human auditory capabilities closely match those of owls, and while the average owl has more acute vision than the average human, there is enough overlap that some visually gifted humans (think Chuck Yeager) may have the edge over individual owls. Where owls really seem to shine is in the area of spatial memory: Those species that live in the darkest, most densely wooded or spatially complex environments are the most territorial, and often very catholic or flexible with regard to diet—in lean times, it's easier for them to switch to secondary or tertiary prey than it is for them to move to a new, unfamiliar location. This "nocturnal syndrome", correlating wooded habitats with strong territoriality, long tenancy, and flexible diet, has obvious implications for rehabilitators releasing owls that have recovered from injury or illness.

While I suspect that The Owl and the Woodpecker will outsell Lynch's Owls of the United States and Canada, the latter will be the first choice of serious raptorphiles. But they are complementary works, and if resources allow, why not read them both?

[Related post: a photo-essay on eastern screech-owls can be found here.]

Posted by Mark Churchill at 6:10 PM No comments:

This is one of those wordplays that will make you smack yourself on the forehead: "Why didn't I think of that?" Dan Piraro, creator of Bizarro (and BizarroBlog), did think of it. And then published it in newspapers across the country. Just in case yours isn't one of them...well, here you go.
Posted by Mark Churchill at 8:37 PM No comments:

Susie's been playing this when she's at the computer, and singing it around the house when she's not, and now it's stuck in my head. So here you go...may as well get stuck in yours.

Keep an eye on that Pomeranian

From WXII, Channel 12 in Winston-Salem, comes this story about a small dog being carried off (and then dropped) by a raptor. As usual when the non-specialist media venture off the pavement, some skepticism is called for. For example: "[Veterinarian Mitchell] Spindell says that large birds like this red-shouldered hawk can do a lot of damage in the blink of an eye." Okay, so he just happens to have a red-shouldered hawk handy, which I suppose made the camera crew's day, but the implication that a redshoulder could have carried off even a toy Pomeranian is a bit of a stretch. A redtail, maybe, or a great horned owl (even in the daytime), but a redshoulder?

Reminds me, of course, of one of Gary Larson's best: 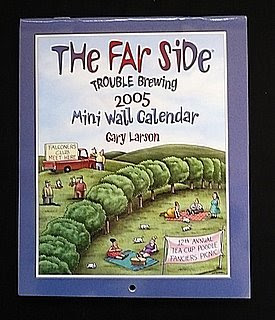 HT remchick, my best source for strange news out of North Carolina.

My brother Greg, who has never hunted before, just took his first white-tailed deer during Maryland's black-powder season. Not with one of those modern in-line jobbies, either: his thunderstick is an 1861 Springfield rifle, firing a .58-caliber Minié round. That's a big chunk of lead, and I wasn't surprised to hear his doe dropped where she stood. One deer, one shot. 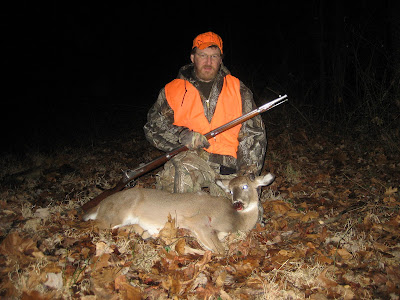 This particular Springfield pulls double duty. It's more often fired, sans Minié ball, at bluecoats when Greg re-enacts with the 13th Virginia. He is the adjutant for the Confederate Military Forces Society; in addition to dressing up and playing soldier (often for the education of kids at living-history events), the CMF raise funds for battlefield and flag preservation.

Greg's deer tag allows him to take two does and a buck, so there may be more pictures to follow. Meanwhile, Greg, congratulations! (And save me some venison.)

Update: Two corrections from Greg. First of all, he took his doe during the regular firearm season, during which he can also hunt with his muzzleloader. Secondly, he has to take two does and a buck before he's eligible for an extra buck stamp—but he can take as many as ten does.

I think the Maryland DNR may be getting serious about thinning the herd; the issues, as usual, are carrying capacity (too many deer overbrowse their habitat, leading to drastic fluctuations in deer populations and adverse effects on other wildlife) and human-deer conflicts (especially vehicle-deer collisions). Successful hunters who may not actually need eleven or twelve deer are encouraged to participate in Farmers and Hunters Feeding the Hungry, a program that puts venison where it's needed most.

Posted by Mark Churchill at 8:06 PM No comments: