An artist's return, a re-enactor's kit

I've been derelict in my duties with regard to blogging. Will try to catch up soon. Meanwhile, here's something I've been meaning to post for at least a month or two...

As some of you may know, my Uncle David's career as an artist [click here for examples of his earlier work] was very nearly derailed by Parkinson's disease. After a 20-month hiatus, he took up his brushes again—and then ripped apart his basement to create a new studio: "Man, was that a lot of work. Everything is ten times more difficult when you have this blasted disease...so you really appreciate any accomplishment."

With "this blasted disease", one must be cautious about tempting fate, and David is well aware of the possibility of relapse, but things are going well for now and he continues to paint. Below is his latest: This piece, done in egg tempera, is entitled "13th Virginia Infantry" after the unit with which my brother re-enacts. The accoutrements are Greg's as well. 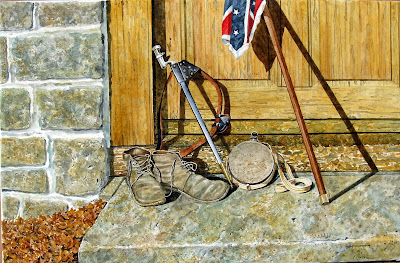 Organized at Harper's Ferry, the original 13th Virginia was Col. A.P. Hill's regiment, and one in which a substantial number of Marylanders served. Its re-enacting counterpart, as I think I've mentioned before, is involved in historical education as well as fundraising for flag and battlefield preservation. Greg and Uncle David have a mutual passion for history, and I know both would be pleased to think that this piece might do something to raise awareness of the many fields of conflict that have been and continue to be lost to suburban sprawl in the Baltimore-Washington-Richmond megalopolis.

And speaking of conservation, both Uncle David and my cousin Scott exhibited pieces (David's "Rain Barrel", Scott's "Balance") at an Earth Day art show hosted by the Howard County Conservancy and organized by Greg Mort. Will update here if I can find links, but no luck so far.

If the mysteries of the Great Plains have a heartland, it is the Sand Hills of Nebraska. The Sand Hills stretch two hundred miles east to west, from the valley of the North Platte in the south to the Black Hills and Badlands of South Dakota in the north. They are one of the great deserts of the world, an American Rub al Khali or Gobi. A desert in disguise: walk out of Valentine, Cody, Whiteclay, Chadron—one of those ephemeral little Sand Hills cow towns whose main street looks like a painted stage set with nothing behind it—and dig. Beneath the brittle grass and the thin smoke of soil, you hit sand; you are standing in a sea of dunes. And if you dig deep enough, you will come to an even stranger realm: a vast ancient subterranean ocean, the 156,000-square-mile Ogallala Aquifer, with more water in it than Lake Huron. A sea inside a desert wrapped in a green prairie.


If you're anything like me, a figure like 156,000 square miles is a bit abstract, Lake Huron hard to picture out of context. Take a quick look at the map and then come back here.

Okay, now another quote from The Hidden West:

The last time Martha went home to visit, she found her father sitting at his desk with a half-empty bottle of Jack Daniel's and a mess of farm journals and scientific reports. It's all over, he told her. Sand Hills cattle ranching's dead. We've got maybe thirty years left, and then the whole business is going to dry up and blow away; from Denver to the hundredth meridian, this country's gonna look like Afghanistan. The dirt farmer and the rancher's gonna be as gone as fifty million buffalo, as dead as Crazy Horse, as rare as a set of jackalope antlers.

Martha Schaller's father was contemplating the drying up of the Ogallala Aquifer through overuse, the mining of fossil water for thirsty crops like corn and lawn grasses. But overuse isn't the only thing threatening the aquifer, and thereby the economic and ecological underpinnings of this region.

TransCanada has proposed to build a pipeline (Keystone XL) through the Great Plains: a 36-inch crude-oil pipe running from Hardisty, Alberta, to the Texas Gulf Coast. Nebraska would be a 254-mile link in the project. The draft environmental impact statement has been completed; the public comment period closes in mid-June and will be followed soon thereafter by the final EIS. Until recently, this looked like a done deal. But if there's an upside to BP's recent/ongoing Deepwater Horizon disaster in the Gulf, it's that people are taking a closer look at safety issues.

At a recent meeting in York, Nebraska—click here for the Lincoln Journal Star's article—attendance was up compared to a previous meeting in Fairbury, presumably because of growing awareness of the situation in the Gulf. "For the life of me," said one landowner, "I can't see how they can even consider this pipeline and take the chance of it ruining the groundwater in Nebraska."

Unfortunately but perhaps inevitably, those with a financial stake in the project—and here I'm going to include politicians, who typically have a tough time saying "no" to projects that stand to bring in revenue—are viewing things much more rosily:

"TransCanada agrees absolutely that it's a very critical resource for the state of Nebraska. And that's why we're taking steps to make sure we don't jeopardize it with this pipeline." —TransCanada official

"I think TransCanada is second to none on safety and environment." —union representative

"I think they're a good company. I trust them to do the job." —county commissioner

The obvious problem here is that plenty of people had confidence in BP and its partners in the Gulf before things went catastrophically wrong, just as plenty of people trusted Exxon before the Exxon Valdez ran aground in Prince William Sound. Now, I'm willing to grant that everyone involved in Keystone XL is well-intentioned, that TransCanada's surveyors and engineers and technicians are competent, that in all likelihood nothing will go wrong. But the nature of the petroleum industry is that no one—no engineer, no corporate executive, and certainly no politician—can guarantee nothing will go wrong. [Link to an (incomplete) list of oil spills.] And the consequences of failure in this environment, even if the risk of failure is small, are simply too high.

If oil gets into the Ogallala Aquifer, there will be no volunteers cleaning the beaches of tar balls, no Coast Guard to deploy oil-containment booms, no practical recourse at all that we can count on—because the whole thing is underground. TransCanada will do its best to act (in public) like a good corporate citizen while (behind the scenes) seeking to limit its financial liability. Politicians will point fingers, convene hearings, and inevitably someone will describe the breach as "unforeseeable". And although everyone will agree in hindsight that the economic benefits of Keystone XL were not worth it, it will be too late: "From Denver to the hundredth meridian, this country's gonna look like Afghanistan."
Posted by Mark Churchill at 3:27 PM No comments:

From Baby Blues by Rick Kirkman and Jerry Scott:

"Where were their mothers?" Iroquois moms could be found on the sidelines, cheering on their sons (always sons back in the day), and most likely betting on the game. Taboos against wagering on sports, to the extent that such taboos exist, are a purely Western convention.

On the rampage at last

Back in the autumn, I took a sabbatical from coaching the Lincoln Rampage lacrosse team in order to concentrate on my falconry. (Which worked out, more or less.) At the same time, my coaching partner, Greg McManus, decided to step down as head coach and assume a more administrative role with the club. The team hired former Nebraska Cornhuskers coach Nate Hoeckelmann to fill our shoes, and things have worked out well.

Nate has coached at the high school and college level for over ten years, and brings not just Xs and Os but also more discipline: he really knows how to run a practice and make the best use of the available time. And, as Greg and I had foreseen, the kids have now come into their own: led by a couple of seniors and a large crop of juniors (and backed by a brilliant freshman goalie in Will Ehrman), they now have the confidence that they belong on the lacrosse field. As of right now, they are 11-2 and ranked #1 in the state by West Side Lacrosse, with one more regular-season game to go before the playoffs start next weekend.

I've attended several of the Rampage's games, and it's wonderful to see them playing so well and winning games, an accomplishment that eluded us for so long. But if I'm honest, it's difficult as well: why couldn't they play like this when Greg and I were coaching? I suppose we will have to content ourselves with the knowledge that ours was a younger, less-experienced team, and with Nate's assurances that the present team's success is laid on the foundation that we built. We started the program from scratch, taught the fundamentals, and (I hope) instilled a love of the game that will last.

Meanwhile, I've not given up coaching altogether. The next frontier: girls' lacrosse in Lincoln. I've been asked by the club to coach a girls' team at the high-school level; we didn't have enough players to field a team this spring (which is probably just as well, considering how busy I've been), but we'll try again next year. And I'll be somewhat involved in youth lacrosse as well...

The quality of high-school lacrosse in the area depends largely on youth programs to teach the sport to younger kids. We hope to resurrect youth lacrosse in Lincoln this fall; meanwhile, Ellie and her friend Amelia are playing up in Omaha again. A few photos from last season follow. 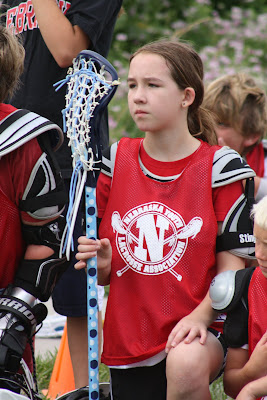 [Going for the ground ball...] 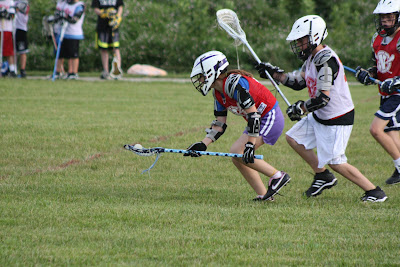 [On the wing, awaiting faceoff] 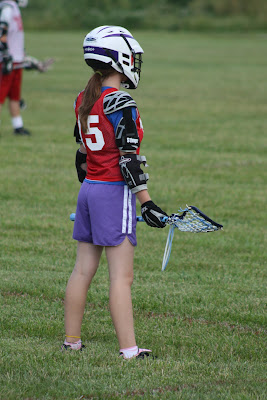 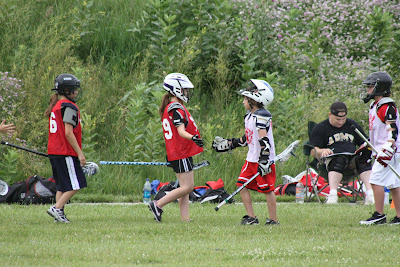 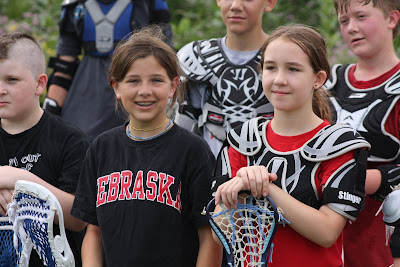 You heard it here first

Last May, writing about my favorite Major League Lacrosse team, I referred to them as "the Baltimore-then-Washington-but-now-playing-in-Annapolis-so-let's-just-call-them-Maryland-or-maybe-Chesapeake-Bayhawks". I don't know if someone with the organization was reading Flyover Country or not, but they are now officially...the Chesapeake Bayhawks.

The itinerant Hawks have struggled to draw crowds in a lacrosse-saturated market. Their first home venue was Homewood Field at Johns Hopkins University (I attended their first game, which was also the league's opening game); subsequent home fields have included M&T Bank Stadium (home of the NFL's Ravens) in Baltimore as well as on-campus venues at Towson University, George Mason University, and Georgetown University. They are now in the second year of a three-year contract with Navy-Marine Corps Memorial Stadium at the US Naval Academy in Annapolis. According to Lacrosse Magazine, the team's new management deliberately adopted a regional approach: "If you don't include any of those cities, you alienate somebody immediately, " says Bayhawks president Brendan Kelly. "We wanted to encompass the whole market. The Chesapeake Bayhawks. It was really a no-brainer, kind of a play off the New England Patriots."

Mr. Kelly, I hope the new strategy (which includes youth clinics and alumni games between local college rivals) pays dividends. I'll do my best to make it to at least one game this summer. And if you did get the idea for the new name here, there's no charge. I'm just happy to be part of the team...

Yes, the Salt Creek Tiger Beetles will be back this summer. More to follow (eventually), so check back.

Posted by Mark Churchill at 10:56 AM No comments: