A wretched and wonderful Fourth

Until a few weeks ago, Jessica had never been in a kayak, but she and I have been hitting one of the local lakes pretty regularly of late, and the plan for our day off was her first river trip. Specifically, we planned to kayak the Platte River from Two Rivers SRA to Schramm SRA, a float of about 19 river miles—approximately six hours' work, or maybe eight at a leisurely pace. So, not feeling pressed for time, we had a campers' breakfast of kosher hot dogs and strawberry Jell-O (keep your judgments to yourself), finished loading both Subarus, and headed up toward Two Rivers.

A kayak trip without outfitter support is a bit like the fox, goose, and bag of beans puzzle. Upon arriving at Two Rivers, we dropped of the boats, then drove both cars down to Schramm, where we left Jessica's (which currently has kayak cradles mounted on the roof); finally, we drove my car back to Two Rivers, to be retrieved at the very end of the day. Alles klar?

Normally, a Platte River trip would be inadvisable at this point in the summer, but it's been a wetter-than-average year, so I thought we'd be okay. I was mistaken. From the outset, we got shoaled on a regular basis, and had to portage nearly as much as we paddled. And even when we could paddle, we made slow progress against a stiff southerly breeze. And the whole while, we had to deal with the dogs—did I mention we brought the dogs?—continually switching kayaks.

God knows what I was thinking. Actually, I know what I was thinking, and I'll share: Maxine and Anya hate the Fourth of July the way the Grinch hated Christmas, and for the same reason: the noise, noise, noise, noise, noise. Most dog owners, I believe, will recognize the phenomenon. Lacking any understanding of the holiday, and thus any context for the continuing fusillade—which in our neighbourhood lasts for days on end—they can only assume that we're under attack. For days on end. Besides which, the hawking season has been over for months, won't begin again for several more months, and the dachshunds are as prone to cabin fever as I am. So I figured a nice quiet ride in the country, followed by some time out of doors, would be most welcome.

And actually, this one aspect of the trip went well, surprisingly well. These are two dogs, mind you, who hate to go out in the rain. In fact, they often refuse to go out if there is dew on the grass. Simply don't like getting their feet wet: "Hmm, thanks for holding the door for us, but upon reflection, it looks a bit dampish out there, so if it's just the same to you, we'll simply pee in the kitchen." And yet I know they can swim—out hawking, they will plunge without hesitation into a creek swollen with meltwater, chunks of ice bobbing about, and swim across to keep up with my redtail in pursuit of a rabbit on the far side. So there were some grounds for optimism, and after some initial trepidation (and much whining), Max and Anya decided to go with the flow, so to speak. Max in particular seemed to enjoy leaping from the deck of the kayak, sometimes to get to the other boat, and sometimes for no apparent reason other than the joy of it. She swam, she scampered through the shallows, she explored some* of the sandbars, seeming as at home in the water as any Lab.

Oh, yes, about those shallows, and back to our travails... We were expecting sandbars and shoals—the Platte is a braided river, after all—but not to the degree that we encountered the latter. Our leisurely cruise had become a strenuous slog; after three hours we had covered only about as many miles, and Jess was bleeding from a cut on her leg of unknown origin. So we exercised the only real option available to us and abandoned the boats. Which is when the real fun began, for all our shuttling of cars had done us no good, was now in fact working against us. The goose had flown across the river, eaten the bag of beans, and then flown back only to be killed by the fox. But hey, it's not an adventure if everything goes according to plan, right?

After concealing the kayaks behind some willows on a near-shore sandbar, we walked a jeep trail leading away from the river, being savagely bitten by horseflies all the way, only to find a closed and locked gate after a mile or so—meaning we wouldn't be able to get Jessica's car down to the water. Oh joy. We hiked another mile or two on the dusty gravel public road, becoming more parched as we went. (We had plenty of fresh water in the kayaks but decided, stupidly in all likelihood, that we didn't feel like carrying one-gallon jugs as we traveled by foot.) Now, I'm not generally keen on asking for help, but under these circumstances, when the driver of a pickup truck stopped and offered us a ride back to Two Rivers, I was willing to accept it. Robert (the driver) and his family, in float tubes, had been stymied by the same conditions—overly shallow water and contrary winds—and he recognized us from the river. His kindness saved us a couple of miles' walking, especially welcome with sunset approaching, but there was plenty more walking to come.

We drove my car back to the locked gate, and Jess and I again started hiking down the jeep trail, making liberal use of the Lord's Prayer (Falconers' and Hapless Kayakers' Edition): "Forgive us our trespasses." The house a quarter-mile in from the gate was unlit and no one answered our knocks, but we were accompanied this time by the landowner's dogs. One was a white Lab; I can't even begin to guess at the second dog's origins, but it was rotund, furry, and had a raccoon's mask. Both dogs were exceedingly good-natured, which gave us some hope that, should the landowner show up, things might go well—friendly dogs tending, by and large, to have friendly people. The horseflies got a second shot at us and then, after we hauled up the kayaks, a third. Still half a mile from the house, but in desperate need of a break, we set aside the fully-loaded boats, trudged the rest of the way out, bade farewell to the dogs, and drove on down to Schramm to retrieve Jessica's car. (This, by the way, is how to enjoy fireworks. The airspace over Gretna and West Omaha was ablaze with colour, while conversation, music on the stereo, and the hum of the engine combined to muffle the bang and the boom. Maxine and Anya, exhausted from their day on the water and the long walk, napped contentedly.)

By the time we returned to the gate and the jeep trail, it was full dark. Still no one at the house, but the white Lab and the masked roly-poly dog again escorted us as we shuffled down the track to where we had left the kayaks. Mercifully, the horseflies had knocked off for the evening, but the wind had finally died down and the mosquitoes were now on the job. These were, however, considerably less painful as long as we remembered not to slap at our sunburned legs. Fatigued beyond measure, we dragged the kayaks up the jeep track, a hundred yards at a time, then fifty, then whatever we could manage. As we approached the house at long last, a man appeared from the darkness: the landowner had finally returned. We introduced ourselves, recited the LP(FHKE) in person, and commented on his dogs' friendliness, hoping once again that it would be matched. And it was: he graciously offered us a ride to the gate, unlocked it, and allowed us to drive Jessica's car in so we could load the kayaks. After a bit more sweating and straining—our arms were very weary by now, and the boats certainly weren't getting any lighter—we were nearly done. The man got a handshake, the dogs got hugs, and we hit the road for Lincoln, where we arrived home in the small hours of the morning.

This was, by any objective standard, a miserable day, and I would have understood completely had Jess been furious. But somehow, despite all we had endured, we'd had fun. We'd seen, in our short journey, wildlife from tiny minnows to the least terns swooping and diving for them. We'd seen our dogs find a confidence on water beyond anything we could have imagined. We'd benefited from the kindness of strangers (and their dogs). We'd exerted ourselves and rejoiced in each other's company. And then this morning, I read Patrick Burns' recommendations for celebrating the Fourth of July, and realized we'd done almost everything he suggested, right down to the hot dogs.

All in all, a glorious Fourth, one we'll not soon forget. Nor, gods willing, repeat.


* N.B.: The dogs were allowed to explore only bare sandbars, and kept off those with any sign of vegetation, to avoid disturbing any unmarked least tern (Sternula antillarum, which I grew up knowing as Sterna albifrons) or piping plover (Charadrius melodus) nests. Sandbars without vegetation we presumed to be regularly flooded, and hence unlikely to be occupied by nesting birds. [For more information, see the Tern and Plover Conservation Partnership.]

[Such a long and varied day, and the only pictures we made were of toads.] 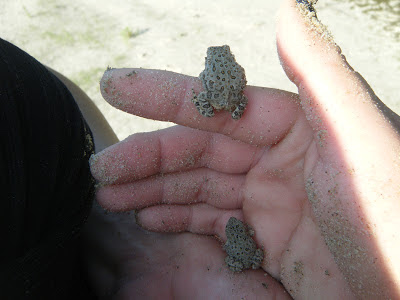 The Brandos' "Gettysburg" was one of my favourites when I was DJing at WLUR-FM in the late 80s.

The battle's last and bloodiest day was 150 years ago today. I used to spend a lot of time at Gettysburg, and on the banks of Antietam Creek near Sharpsburg, Maryland. These are two locations that rather bolster the traditional Native American view that whatever happened at a place is in a sense always happening at that place. Or, as William Faulkner put it, "The past is never dead. It's not even past."

Posted by Mark Farrell-Churchill at 6:39 AM No comments: