It was twenty years ago today...

The Specials perform "Free Nelson Mandela" on Top of the Pops. I defy you not to dance in your seat to this one.

Hugh Masekela, "Bring Him Back Home".

I'm starting to wonder why we (Nebraska Falconers' Association) have field meets in February, as each one is smaller than the last. (If the trend continues much longer, the meet will consist of me walking around talking to myself—in other words, a normal day's hawking.) This year's count was three birds flown: two redtails and a merlin.


[Ed Fitch with one of his gyrs. Regrettably, we didn't get to see them fly, as Ed arrived rather late on Saturday, but it was good to see Ed. Photo by Pat Stull.] 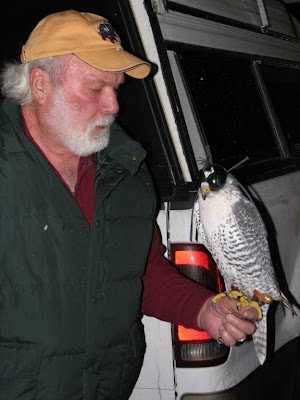 Nick Morris, a first-year apprentice from Fremont, lost his first redtail earlier this season when it was chased off by a bald eagle. (No telemetry.) Undaunted, he trapped another redtail, this one a nice-looking and strong-flying tiercel, in December. They had already caught nine rabbits before the meet, and on Saturday added number ten. (And yes, he has telemetry now.)


[Nick trades Ted off the rabbit. Photo by Pat Stull.] 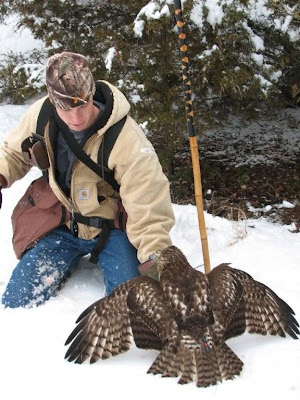 Stekoa also caught a rabbit, and then I made a mistake. I tossed him a small piece of food to trade him off the rabbit, then took a bit too long to put the bunny away and offer him another piece on the fist. Done with his snack, he flew up into a cedar and refused to come down for the second installment...so we were forced to keep going. (Oh noes!) Eventually he caught a second cottontail, got two more chunks of meat, and was done for the weekend. 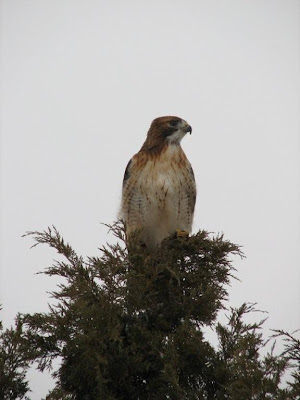 But the highlight of the meet for me was flying Wakulla. We've done quite a bit of training in the field by now, but she'd had limited opportunities to fly at birds, and I was feeling a bit frustrated. In truth, she didn't seem that much faster than a kestrel. Where was the vaunted merlin speed? Had I allowed her weight and condition to slip too low? Those worries have now gone away.

[Wakulla and me. I'm in the sunglasses; Wakulla is the good-looking one in the full hood. Photo by Eric Johnson.] 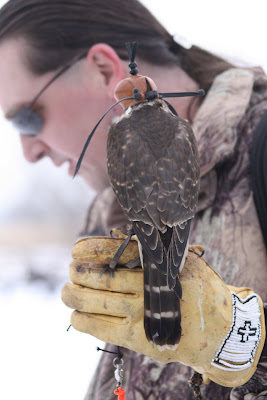 We set out Saturday afternoon (before bunny hawking, actually) to find some quail. Local falconer Chris Podraza, currently without a hawk, was serving as the guide and obtained permission for us to walk a farm just west of Grand Island. We ambled along a creek lined with cottonwoods, Wakulla hooded on my fist, until Nick flushed a covey of eight or nine bobwhites. Marking the put-in, we then unhooded Wakulla and kept walking. When a pair of hidden bobs flushed, she dropped off my fist, leveled out just above the ground, and turned on the jets. She soon disappeared around a corner, but some of the others had a better view of the flight and told me she had pitched up immediately above the spot where the birds had dumped into cover. Encouraged, we continued to work the brushy cover upstream, letting Wakulla fly mostly from the trees; as singles, pairs, and trios flushed, we were rewarded with several hard flights, quail rocketing through the trees with Wakulla in hot pursuit. Each time they escaped by the narrowest of margins, and finally I called Wakulla down to the lure for a well-deserved reward. She wasn't even breathing hard.

With all the hawks flown, we retired to El Toro restaurant for a Mexican dinner that couldn't be beat. After trudging through the snow all afternoon, we were beat. But the most exhausted member of the hawking party had to be Maxine, who had not only accompanied Stekoa on his double-rabbit hunt, but also helped the rest of us flush quail! She's turning out to be quite an enthusiastic bird dog—not that I ever expect her to point, but she can sure flush like a spaniel. She really is the best hawking dog I could have asked for: she loves to hunt, and truly respects the hawks—not just the redtail, who could hurt her if they ever came to blows, but also the merlin. My trust in her is complete, extending to leaving her alone with Wakulla both in the car and in the hotel room. I certainly wouldn't try this with most dachshunds! (Including Anya, which is why she was left at home.)

[Travel buddies: Max and Wakulla. Photo by yours truly.] 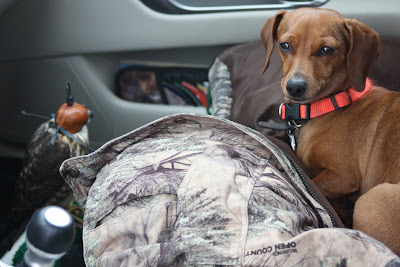 As for Sunday, there's not much to tell. Nick and his hawk had already gone home, and Stekoa was too heavy to fly, so we took Wakulla out in the afternoon for another go at quail. Chris spotted a covey huddled under a cedar in a small woodlot, and Wakulla got two chances: one on the initial flush, and then a reflush on some birds that had put in on the edge of the woods. But once they were gone, it was pretty much over. Chris correctly pointed out that it would be a mistake to continue hunting too late into the afternoon, especially with colder weather moving in (bobwhites rely on each other to keep warm, and once busted, a covey needs time to regroup), so we called it a day.
Posted by Mark Churchill at 4:54 PM No comments:

A stressful drive along US-34 from Lincoln to Grand Island this afternoon, thanks to a snowstorm last night and this morning—not that the highway itself was snowed in. Indeed, the fact that it was so well cleared was the problem, as flocks of horned larks (Eremophila alpestris, known in Europe as the shore lark) had abandoned the open fields to congregate on the shoulder of the roadway. I drove past—or rather through, as they flushed for every approaching vehicle and darted every which way—literally hundreds of flocks, each composed of hundreds of birds. I slowed for each flock, which made the trip longer and no doubt annoyed the drivers behind me, but evidently not everyone did slow down: the highway was littered with dozens of roadkilled larks. The carnage reminded me, strangely enough, of Christmas morning, after the kids have opened their presents but before anyone has cleaned up all the little bits of brightly colored paper.

It might seem odd to some that the larks would keep returning to the roadway when it is so obviously dangerous, but the fact is that life is dangerous for larks. They are birds of wide open spaces; merlins and prairie falcons hunt them every day, and there is no avoiding them, no place to hide except in the anonymity of the flock. I suppose they must perceive cars as just another predator. The difference, of course, is that a falcon must expend a great deal of energy and effort to secure a lark, and once successful, bears away its prize to dine. Cars and trucks can kill larks wholesale, and to no good purpose. 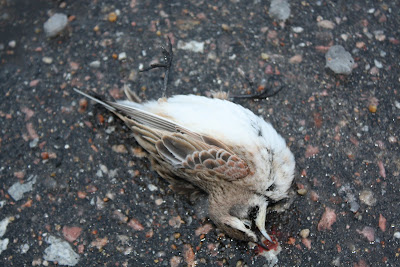 Because of their tendency to flock and their preference for open country, horned larks are vulnerable not just to traffic, but also to collisions with wind turbines, cell phone towers (and their supporting guylines), and fences. It's a good job they're so plentiful, because death by misadventure—in bulk quantities—is a common fate.

With all this death at the hands of humanity, it's interesting that should my merlin happen to catch a lark—one—I could conceivably be charged with a felony. Happily, that is changing: the new federal falconry regulations recognize that trained hawks are birds, free agents with minds of their own, not remote-controlled airplanes under the direct influence of the falconer. Strict liability will give way to considerations of intent, which is as it should be: deliberate poachers can still be prosecuted, but falconers will no longer live in fear of an unintended but completely natural event being blown out of proportion.
Posted by Mark Churchill at 8:31 PM 4 comments: