Pendleton is the best-known marketer of trade blankets in the States, but credit for the creation of the blanket trade must go to "Canada's Merchants", the Hudson's Bay Company. Chartered in England in 1670 and headquartered at York Factory (now in Manitoba, but originally the commercial capital of Rupert's Land), HBC was established to compete with French fur traders and served for a time as the de facto government of British North America.

Along with firearms, cookware, beads, etc., European fur traders often paid their Native and Métis suppliers in wool blankets. The iconic HBC product is the "multistripe" or "candy-stripe" blanket, a white point blanket with headers in "Queen Anne's colours" of green, red, yellow, and indigo—although other blanket-makers (including Pendleton) copied this design, so closely is it associated with Hudson's Bay that stripes in those colours have been incorporated into the modern company's logos. Nevertheless, HBC point blankets were and are made in a variety of other colours, some of which have changed with the whims of fashion while others (notably red, green, and blue) have remained constant or nearly so.

The blanket below, royal purple with white points and headers, is a one-off design, made only in 1953 to commemorate the coronation of HM Queen Elizabeth II. It is consequently among the rarest of the 20th-century Hudson's Bay blankets, and to my mind one of the very prettiest. 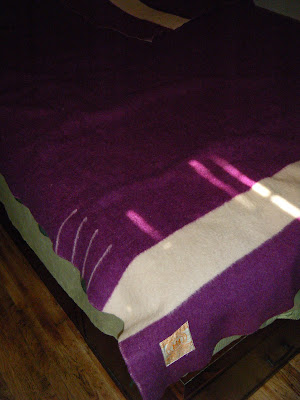 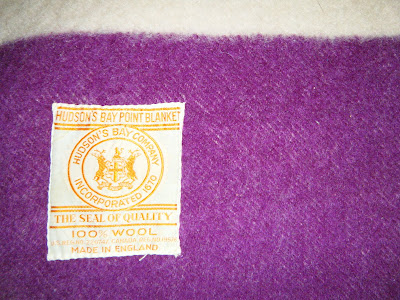 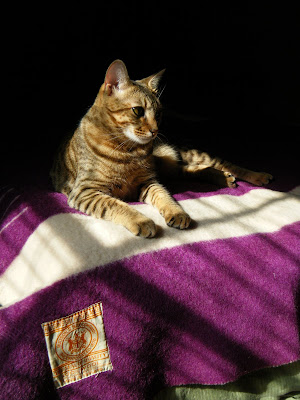 Word has just come down, incidentally, that the Canadian Forces are reverting to their old names: Maritime Command will once again be known as the Royal Canadian Navy, Air Command will once again be the Royal Canadian Air Force, and Land Force Command will be simply the Canadian Army. Defence Minister Peter Mackay intended the renaming as a nod to the services' "proud history and traditions", but Canadian republicans have derided the move as "abject colonialism". [Links to BBC and CBC.] A reminder, either way, that among Elizabeth's titles is Queen of Canada.

[Link to the Museum of the Fur Trade in Chadron, Nebraska. Among their artifacts: the oldest known surviving point blanket.]